Recognizing that women can't go to the office dressed like dinosaurs, Yohji Yamamoto has more to offer than the spiky looks shown on the Paris runway last week. 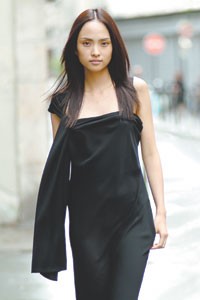 PARIS — Recognizing that women can’t go to the office dressed like dinosaurs, Yohji Yamamoto has more to offer than the spiky looks shown on the Paris runway last week. “You need daily wear,” said Keizo Tamoto, Yamamoto’s new chief executive, who is spearheading a product-led turnaround for the Japanese fashion house. To wit: Yamamoto is repositioning and expanding his 10-year-old +Noir label — previously based on black silk and mostly available in Japan — as its main ready-to-wear offering.

Tamoto described the runway line as “laboratory couture.” By contrast, +Noir is a broad range of creatively cut staples in black and white, as well as sweaters and denim. There are also striped shirts, herringbone cardigans, linen skirts and a range of accessories. Prices are in the designer range, with silk dresses around $1,000 to $1,500 and jeans around $400 to $500, according to a spokeswoman.

Yamamoto is also making a concerted push in accessories with Y Design, a label tested last season and now applied to a compact range of Italian-made handbags. The versatile leather purses, carryalls and weekenders, all expandable, come in classic Yohji colors: black, cream and red. Tamoto described Yamamoto’s current handbag business as “very small.” Y Design, with bags retailing from $650 to $1,100, is meant to open the possibility of accessories corners in department stores.