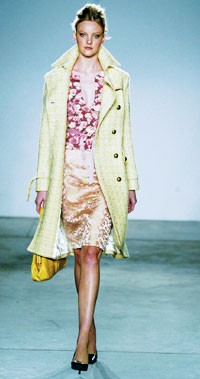 NEW YORK — The air was filled with excitement on Thursday night as Banana Republic put on its second runway show at the Chelsea Art Museum. About 400 people turned out to catch Gap Inc.’s latest foray into fashion-oriented looks, a move that pulled in publishing’s heavy-hitters. Golden Globe winner Mary-Louise Parker and teen movie queen Mandy Moore arrived to take seats in the front row. (The pair are currently filming John Turturro’s “Romance and Cigarettes.”)

“They invited me,” said Parker, who was wearing a Banana top and carrying a Marc Jacobs bag. She had asked if she could bring along her co-star.

“I wanted to see some fashion,” added Moore, who was in a Marni cotton jacket and jeans.

Even one of Gap Inc. chief executive officer Paul Pressler’s former Disney buddies came to show his support — Stephen Burke, now president of cable-giant Comcast and a key figure in that company’s hostile bid for Disney. Pressler got into the mood, taking to the stage to thank everyone for their support. “This is my first time on the runway, and I think I like it,” he said, as the crowd laughed. After 18 months on the job, Pressler has reshaped Gap Inc., which has gone from a net loss of $8 million in fiscal year 2001 to $1 billion in profits last year.

As for the show, executive vice president of product and design Deborah Lloyd shed Banana’s office basics for stylish, fashion-conscious yet affordable looks. There were Seventies London boho pieces in the form of printed wrap dresses, electric-green suede minis and cute shrunken peacoats as well as affordable Prada adaptations such as fake-fur wraps and print-lined cardigans, all paired with pearls and plenty of brooches to add a vintage, grandmother’s-closet feel. The designer also touched on the Twenties with a stunning drop-waisted, sequin dress shown with a fake-fur capelet.