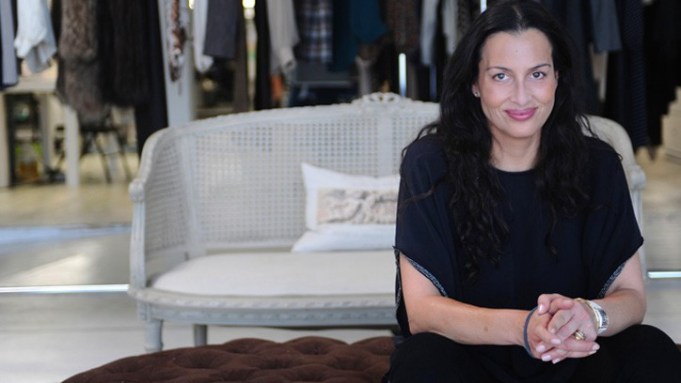 In fall 2008, just as the economy bottomed out, Margaret Maldonado decided to launch a contemporary collection called L’Agence. Her first order of business was designing the label that would be sewn inside the clothes; her second, cold-calling Ron Herman, the Los Angeles-based retailer, to ask for a meeting.

“Ron cracks up when he tells the story because I didn’t have the samples, but I knew what I wanted to do,” says Maldonado, 46, who has no formal design training. “We had lunch, and I brought him the sample of the tag, and he was like, ‘I believe that you are going to do this for some reason. You’re a little strange. Come back to me when you have a collection.’ ”

Once the samples were ready, not only did Herman buy the line for his stores; he signed on as a business partner, bringing with him Jeff Rudes, the president and chief executive officer of J Brand. L’Agence is now carried in 250 stores around the world, including Dover Street Market, Barneys New York and Net-a-porter. The clothes themselves are on the quiet side — leather leggings, military jackets, draped jersey pieces — and subscribe to the Los Angeles standard of laid-back style. One could say L’Agence is a case of beginner’s luck, but stranger things have happened to Maldonado.

Designing is actually her third act, which, despite respectable growth, does not yet make a profit. The business is supported by the income she receives from the Margaret Maldonado Agency, of which she is sole owner. It launched in 2000 to represent hair and makeup artists, photographers and, most notably, stylists — those who dress celebrities and the few who have become celebrities in their own right. MMA’s current roster includes Jen Rade (Angelina Jolie), Petra Flannery (Mila Kunis, Emma Stone, Zoe Saldana), Cristina Ehrlich, formerly of the styling duo Estee and Cristina, and Andrea Lieberman.

Yet Maldonado’s story really began in 1986, at a friend’s birthday at a Los Angeles restaurant, during which Jermaine Jackson serenaded her table. “He asked if he could call me because — this is really, really cheesy — he’s doing a music video and he wanted to know if I was interested in being in it,” said Maldonado. The video never happened, but Jackson, who was married at the time, and Maldonado, then 20, struck up a phone relationship.

By the time she was 21, Jeremy, the elder of her two sons with Jackson, was born. Maldonado moved into Hayvenhurst, the Jackson family’s Encino compound, where she lived off and on until 1993. “I moved into Janet’s room. It was right at the time when La Toya was moving out and Michael was just getting ready to buy the ranch, so he was there for a short period of time, too.”

Prior to that, Maldonado was a self-proclaimed “crazy teenager” who dropped out of high school in Los Angeles and moved to New York at 16 with hopes of becoming a model. “I found out I was too short, met a fast crowd” — which included Johnny Calvani and Saudi arms dealer Adnan Khashoggi — “moved to Europe, came back,” she says. “When I met Jermaine, I was ready to settle down” (if that’s what one calls moving in with the Jackson clan). “My girlfriends would come over, and we’d be sitting in the dining room talking, and you could hear the feet upstairs and every once in a while you’d hear ‘woo!’” says Maldonado, who never officially married Jermaine but still refers to him as her ex-husband. “It was Michael in his room and he was rehearsing because he was getting ready to go on his Bad tour.”

Maldonado became Jermaine’s de facto manager, gleaning business sense from his lawyer Joel Katz, from whom she learned all about the art of the deal. “There always has to be a bad guy in the picture and I became the bad guy,” says Maldonado. “It’s like those typical stage wife or stage mom stories. I was that person.”

She decided to get into TV, with the 1992 miniseries “The Jacksons: An American Dream” as her first producer credit. “That was my project,” says Maldonado, adding that she worked closely with Katherine Jackson, the family matriarch, on the show. “Everyone in the family had a project, so I didn’t want to be the loser wife that didn’t work.”

Things didn’t work out with Jermaine, and seven years later Maldonado moved out of Hayvenhurst. (She is now married to Mikko Koskinen, who is her partner at MMA.) “I wanted to have my own life. I didn’t want to live behind gates and have my kids grow up in that kind of sheltered environment. It is the real world for [the Jacksons], but I wanted Jeremy and Jourdyn to grow up in more of a normal environment.” She put the full, juicy account of her time as a Jackson “wife” on the record in her 1995 tell-all book “Family Values: Memories of Madness.”

“The whole picture is that I left and I never collected child support,” she continues. “And when you have two kids and you’re young and you’re starting your life over, you have to pay rent and pay for a car and schools and tutors and a lot of things.” (Calls to Jackson were not returned.) She went to Dove Books, the publishing house behind such titles as “Mile High Club: First Class All the Way With the Rich and Famous” and “The Private Diary of an O.J. Juror,” and got herself a book deal and then started working there part time. At the same time she reconnected with and began assisting the stylist Deborah Waknin, an old friend from Maldonado’s party days in New York, whose clients included Gabriel Byrne, Halle Berry and Demi Moore. Waknin encouraged Maldonado to put to use some of the music connections she’d made through the Jacksons, among them Benny Medina, Gordy Berry’s protégé, who was managing Jennifer Lopez and Puff Daddy, as he was then known. Waknin became Maldonado’s first client when she booked her for Lopez. Andrea Lieberman, who was Puffy’s stylist, followed, and MMA was born.

Within the first year, Maldonado was repping 20 stylists. “At that time, the music business was in its heyday,” she recalls. “There were five to six music videos a week being filmed in Los Angeles. So we were doing everything from Destiny’s Child and Beyoncé Knowles to No Doubt, to Puffy and Jennifer’s videos, to Shakira. Everybody who had a record out, you could pretty much say that we had a hand in.” Her specialty was pairing the right client with the right stylist, the most famous example of which was Rachel Zoe and Nicole Richie.

“Rachel came to me and said, ‘I want a career like Andrea’s,’” says Maldonado. “I said, ‘OK. Andrea has a career like hers because she works 24 hours a day. She’s completely dedicated and committed.’ Not that Rachel’s not. Rachel’s just different. Andrea can help give someone their own individual look that’s very much them. But Rachel is someone who had a very specific look, and she’d take her look and put that onto her clients. I got a call from Lionel Richie, who was going on Oprah with his daughter, and he wanted his daughter to have a stylist. So I called up Rachel and said, ‘Here’s a client for you.’ That’s when everything happened for Rachel.”

As anyone with a TV knows, Zoe, whom her publicist said was on maternity leave and not available to comment for this story, was not content to stay behind the scenes, which conflicted with Maldonado’s philosophy. According to Maldonado, Zoe left MMA in 2006. “I’m happy for Rachel because I disagreed,” says Maldonado. “I told her we’re actually in the service industry. We’re paid to help our clients, and whatever we do with them is ‘zip.’ We’re not in front of the camera; that’s not our role. She proved me wrong.”

It was a lesson learned. Even though Maldonado had a history of brokering deals for her stable of clients — she installed Zaldy as the launch designer of Gwen Stefani’s L.A.M.B., and worked with Medina on Lopez’s Sweetface deal, providing Gina Rizzo and Lieberman as design consultants; likewise for the Sean John line — Zoe was a reminder that if Maldonado wouldn’t put her stars out front, other agencies would. The same year she lost Zoe, Maldonado set up Lieberman, her most valuable client, who was always interested in design, with a line of jewelry for Mouawad.

“What makes Margaret an amazing agent, as well as all the other hats she wears, is that she was able to see an opportunity and figure out that it would work for me,” says Lieberman. Four years later, Maldonado found a manufacturer for Lieberman to launch her contemporary line ALC, now carried at Barneys, Net-a-porter and Saks. And there have been design collaborations for her other stylists, a Frederick’s of Hollywood collection by Stanley and Ehrlich, guest spots on reality shows and features in magazines.

But perhaps the sweetest deal Maldonado has brokered has been for herself, with L’Agence. “I kind of looked at my stylists like my kids and I was like, all my girls are growing up,” she says. “Everyone has to evolve.”

Securing partners such as Herman and Rudes was major. “What I was most impressed with was that Margaret was not telling me a story about celebrity,” says Herman. “She was not telling me a story about how she couldn’t find the perfect T-shirt so she wanted to make one.” To be fair, L’Agence is large on T-shirts. They targeted European stores for the collection launch with a U.S. exclusive at — surprise — Ron Herman (who says the line is the top seller in his store).

Now L’Agence is in a position to expand with licensing, beginning with sunglasses with Sama that launched last month. Shoes and bags are planned for resort or spring, depending on when samples arrive, and a L’Agence/J Brand cashmere jean for holiday. Maldonado’s also designing the new uniforms for the staff at Chateau Marmont, because that’s as L.A. as it gets.