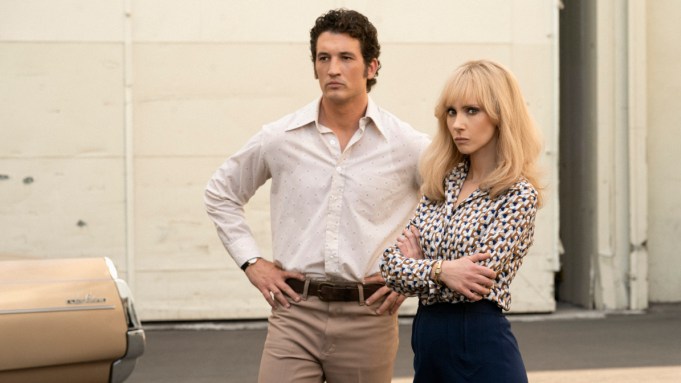 For costume designer Amy Stofsky, creating the wardrobe for Paramount+’s new series “The Offer” was a personal project given she’s a native New Yorker and grew up watching the beloved trilogy of “The Godfather.”

“I’ve loved the movie my whole life. It’s a joy,” she said. “You’re telling a story that, generationally speaking, we watched it a million times. Sometimes I go visit my mother and she’s, like, ‘I’m watching ‘The Godfather’ for the 100th time,’ because each time you watch it, you see something new.”

Stofsky’s knowledge of the movie series came in handy when designing the costumes for “The Offer,” which debuts Thursday on the streaming service. “The Offer” tells the story of how Oscar-winning producer Al Ruddy (played by Miles Teller) created the first “The Godfather” film in the 1970s and features a dramatic tale that includes the Italian mafia, death threats and the tumultuous leadership at Paramount Pictures.

Given the vast amount of source material — both from “The Godfather” film itself and articles about the Paramount leaders — Stofsky pored over the research to emulate the styles the characters gravitated to in the early 1970s.

“It was really just looking up what they were doing then,” she explained. “Ruddy had started out as an engineer and he kind of fell into the business. Then you’re looking up people like Mario Puzo and Francis Ford Coppola, so it’s pretty easy to find pictures of them. You always take a little creative liberty because something might look better on somebody, so you cheat a little. You give a little and you take a little. Even in ‘The Godfather’ itself, you see that they cheated quite a bit, too.”

While the majority of “The Offer” is set in the 1970s, “The Godfather” itself is set in the 1940s, meaning Stofsky was tasked with creating virtually two period dramas within one project. For the scenes recreating “The Godfather” — like where the actors portraying Diane Keaton and Al Pacino are Christmas shopping — Stofsky stayed true to the original film.

“We tried to emulate the [costume] designer of ‘The Godfather,’ her name was Anna Hill Johnstone,” Stofsky said. “We also tried to keep in mind the colors that she used for the continuity of the story itself. There were so many people in the movie and so many executives from Paramount and Gulf+Western and so much publicity on people like Robert Evans and Ali MacGraw, so it was pretty easy to copy that.”

Among the characters, Stofsky said Evans has the most standout and flashy style. The character is regularly seen wearing colorful, printed suits when working, and then more flamboyant, disco-inspired outfits when in a party environment.

With the female characters, their style evoked a blend of traditional 1960s style with the emergence of new trends that were more prevalent by the mid-1970s. This was seen most prominently when characters Andrea Eastman (played by Stephanie Koenig) and Bettye McCartt (played by Juno Temple) have a conversation about the former’s inclination toward full skirts and the latter’s for trousers.

Overall, Stofsky thinks “The Offer” will resonate with “The Godfather” fans and new viewers for the storyline, costumes and nod to old New York.

“Being a New Yorker, it’s all so familiar,” she said about the TV show. “’The Godfather,’ there are so many wonderful parts to it. There’s just a feeling — an old New York feeling and a neighborhood feeling. You can smell the tomato sauce, the fresh bread and the garlic.”