As if Mary-Kate and Ashley Olsen weren't busy enough, the twins are on to a new venture - the launch of Elizabeth and James, a contemporary sportswear line. 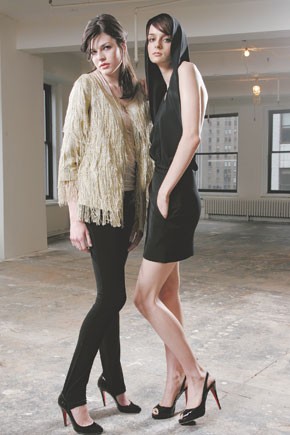 As if Mary-Kate and Ashley Olsen weren’t busy enough, the twins are on to a new venture — the launch of Elizabeth and James, a contemporary sportswear line, ready for fall selling.

Named after the Olsens’ younger sister, Elizabeth, and older brother, James, the line is the latest addition to the extensive portfolio of brands managed by the twins’ 14-year-old company, the Culver City, Calif.-based Dualstar Entertainment Group. For the new brand, the Olsens teamed up with L’Koral Industries, a Vernon, Calif.-based firm owned by partners Peter Koral and Jane Siskin. Best known for their multilabel junior business and the creation of the Seven For All Mankind brand, as well as contemporary label LaRok, L’Koral expects volume in excess of $200 million this year.

The latest launch comes just after the debut of The Row, the Olsens’ directly owned high-end line consisting of $655 floor-length Modal cardigans and more than 25 knitwear pieces, selling at Barneys New York nationwide and Maxfield in Los Angeles. In the fall, the duo will expand distribution of The Row’s $3,220 Tuscan lamb fur coats, $875 banded strapless dresses and other items to specialty retailers including 10 Corso Como in Milan, Harvey Nichols in London and Isetan in Tokyo.

As The Row rolls out, the 20-year-old fraternal twins (21 in just 14 days) have turned their focus to the contemporary market. In true twin form, the sisters completed each other’s sentences when describing the line in a telephone interview.

As far as inspiration for the collection, Mary-Kate, who shares the title of design consultant on Elizabeth and James with her sister, said, “We wanted it to be based on a relationship between a young girl and a boy and tell the story through the clothing.”

“It’s a clash between masculinity and femininity,” Ashley added.

While they named the line in honor of their siblings, Ashley said they haven’t put a face to the label. Still, the young woman they have in mind when they’re designing is in her “early 20s, figuring out life and just experimenting,” she said. “It’s a sophisticated woman with a playful side and is still chic. It’s someone who understands fashion and understands details and expects that as well.”

This story first appeared in the May 31, 2007 issue of WWD. Subscribe Today.

Mary-Kate said they approached Siskin a year ago to become a partner in the label, which she hopes will fill “a void in the market that we thought we could definitely excel in.”

Siskin said when she met with the girls, they seemed to be on the same page almost immediately.

“It was at the same time that we were thinking of launching another contemporary line at Koral, so the timing was perfect,” Siskin said. “Since our meeting, the development of the line has really been a natural process and we all work together so well. The girls are all about detail, where I see the big picture, so it’s a nice combination.”

The result is a full contemporary collection that is a play on masculine verses feminine and casual versus dressy. There’s the Elizabeth blazer, which is tailored for a woman’s figure, and the James blazer, which has more of a boyfriend-inspired boxy fit. There are washed leather jackets; a stretch twill military-inspired top and the same top available in taffeta, for a more feminine look; supersoft shrunken T-shirts as well as oversize T-shirts; pencil skirts; cashmere sweaters; chunky knit swing jackets; oversize fur jackets, and cashmere coats. For a dressed-up look, the line includes silk dresses and a sequin minidress that was inspired by one of Mary-Kate’s vintage finds.

Siskin declined to give first-year sales projections for the brand, but said they plan to take growth slowly without oversaturating the market.

While acknowledging there may be a slight overlap between the Elizabeth and James line and L’Koral’s LaRok brand, Ashley dismissed any concerns there would be an inter-company rivalry between the two businesses, partly because the price points are different.

Ashley emphasized that Elizabeth and James won’t share any designs and fabrics with mary-kateandashley, their exclusive clothing collection for Wal-Mart, or The Row.

“They’re all parts of different companies,” she said, noting the mary-kateandashley brand is produced under license with various companies that work with Dualstar, while The Row is funded and run by the twins. “They all stand alone. They all represent a different place in the market.”

At a time when many shoppers pay more attention to trends than brands by mixing bargain purchases from fast-fashion retailers such as H&M with contemporary and designer labels, Ashley said the consumer has become more sophisticated. With wholesale prices ranging from $40 for T-shirts to $452 for a fox-fur trim coat, Elizabeth and James is intended for a woman who wants a designer garment but cannot afford it, she said.

“It’s a sophisticated, but a smart, shopper. It’s someone who understands the design aspects of fashion [and] the designer product, but also doesn’t want to pay designer prices,” Ashley said.

Ashley said Elizabeth and James will launch domestically with four collections for spring, fall, holiday and resort in limited distribution.

“A lot of [retailers] were very interested,” she said. “We were just interested in going into business with someone who wanted to be partners and grow the brand and brand awareness.”

In the end, Elizabeth and James is about their vision.

“We’re always going to stay true to ourselves and what we believe is chic and flattering and fashionable,” Mary-Kate said. “That’s something that we really look at in the line, whether it’s color or themes or fabrics. We really think about the customer.”

For Bergdorf Goodman, which picked up the line for fall along with Neiman Marcus and Intermix, Roopal Patel, senior women’s fashion director at Bergdorf’s, said the Elizabeth and James collection should fit in on the contemporary floor quite well.

“The look of the line is very modern with an urban approach,” she said. “It’s fresh, appealing and very eclectic. I think that customers will notice that it will reflect their own personal styles without taking over their look by being supertrendy. The line shows a great balance of vintage meets masculinity and rock ‘n’ roll, which makes it unique.”

Patel said when she went to look at the collection for the first time, she brought along her team of buyers, who each tried on something from the line and each found something they loved.

“Elizabeth and James is inviting without being overpowering,” she said. “I think it will do very well for us.”

Understanding the contemporary customer is a crucial step toward success in the highly competitive, but still booming, category, said Janine Blain, director of the West Coast office in Los Angeles for the Doneger Group, a New York-based fashion merchandising, trend-forecasting and consulting company. In fact, Blain said the contemporary category is marked by two segments: the increasingly important fast fashion as characterized by retailers like H&M and Zara, and the branded collections such as Alice + Olivia, BCBG, T-Bags and Ella Moss.

“There is more great product at a good price than, in my opinion, there ever has been in the U.S.,” Blain said. “Contemporary gals will shop at H&M. They will shop at Zara. Some will check out Forever 21. Again, it’s not about a brand. It’s about picking up a great look.”

Still, Blain said there is always room for good new brands because the contemporary category is a fast-turning market.

“That means that customer loves newness,” she said. “She shops every week.…Always giving her a reason to buy is important.”

While the Olsens’ celebrity would generate intrigue from consumers to check out Elizabeth and James, Blain commended their decision not to name the line after themselves, especially at a time when the contemporary customer is tiring of celebrity endorsements.

“When [labels] are screaming a celebrity name, that becomes first and the design is secondary,” she said. “They are smart in how they are marketing this. I do like the idea that they are being a little more subtle.”

Besides, Blain said, the Olsens are recognized as style leaders and always have a look. “Even if they are very young, they wear some very sophisticated designers,” she said. “They look contemporary even if they are not wearing a contemporary label. What does that mean? They look hip.”