The Other Side of Paris – Anne Valerie Hash, Felipe Oliveira Baptista

This season creates an opportunity for some ready-to-wear designers, whose small shows are sandwiched between the couture presentations. 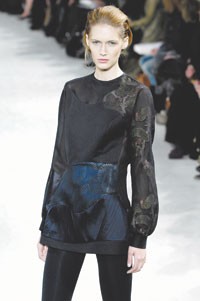 This season creates an opportunity for some ready-to-wear designers, whose small shows are sandwiched between the couture presentations.

Anne Valerie Hash: Some things are a matter of black and white. Such was the case with Anne Valerie Hash’s fall ready-to-wear collection, in which she worked a positive/negative dichotomy. If her bold white tailoring looked a bit tricked up, Hash more than made up for it on the sober side of the divide where she wrapped youthful sobriety in considerable charm — moody schoolgirl duds; a Black Swan tutu edged in silver; a collage shift inset with assorted moody prints. Still, something was missing: any sightings of the terrific new handbags with which Hash hopes to make inroads into the U.S. Though there’s something to be said for her purist approach to showing, perhaps next time Hash should take a cue from the marketing-oriented bigwigs and flaunt some of those beauties for the cameras.

Felipe Oliveira Baptista: Horseplay was afoot at Portuguese designer Felipe Oliveira Baptista’s fifth ready-to-wear show as the designer blurred the boundaries of art and fashion. Ponyskin dresses sculpted from sponge to echo horses’ organic forms and spherical, tent-like dresses formed the main part of the designer’s madcap parade. More wardrobe-friendly fare was to be found, however, in the collection’s slim-line, riding-inspired looks (decorated with the pattern of a horse’s muscles, nonetheless) and elegant silver jacquard tunics.