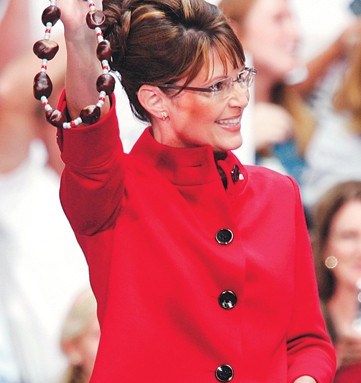 As she zipped her way around New York City last week, Republican vice presidential candidate Sarah Palin strayed little from the every businesswoman attire she’s adopted since the convention. That meant a slim black suit on Tuesday, a gray skirt and — a bolder move here, for her interview with Katie Couric — a bright pink jacket on Wednesday, which she replaced with a dark V-neck ruffled blouse before meeting with Iraqi and Georgian leaders, and black trousers and a gray mandarin-collared jacket on Thursday. Yet after weeks of flurried investigation on everything from her habit of secondhand shopping (we now know that, prior to the nomination, Palin snapped up an Escada tweed coat at Out of the Closet, an Anchorage-based resale shop she has frequented) to her lipstick preference (she has allegedly switched from Mary Kay to MAC) to her supposed swat team of stylists, the McCain campaign and those in the fashion industry are taking a clear stance on Palin’s style: No comment.

With the presidential race entering its final four-week stretch, and the widely anticipated vice presidential debate set to take place tonight, it may be that the initial frenzy to identify Gov. Palin’s preferred brands and subsequently take shots at, or race out and purchase, said labels — depending on one’s taste or party — has given way to an effort not to seem consumed by the more frivolous aspects of the election.

“I am not commenting on this one,” Saks Fifth Avenue fashion director Michael Fink replied when asked about the $2,500 silk shantung Valentino jacket Palin wore to the Republican National Convention that was reportedly purchased at Saks. “We just can’t comment,” a spokeswoman for Valentino said when asked about any other pieces by the designer that the candidate had worn. That secret stylist army? “We don’t comment on the governor’s wardrobe, but thank you for reaching out,” said Palin’s campaign spokeswoman Maria Comella. Even the previously chatty folks up in Alaska are learning to keep quiet. “Oh, jeez, I’m not supposed to say anything [about her],” said a saleswoman, identifying herself as Katherine, at Nordstrom’s in Anchorage, where Palin has been a longtime customer. “I think you’re supposed to call corporate.” (Corporate didn’t return calls.)

Unlike Michelle Obama and Cindy McCain, whose looks at last week’s presidential debate were either fashion-forward (Obama once again selected a floral Thakoon shift) or classic and formal (for McCain, a red pantsuit), Palin, as the lone female candidate in the race, imparts a down-to-business image, but she’s neither power babe nor sexy secretary — her suits are fitted but never tight, the skirts pencil-shaped and knee-grazing, the colors either black or bold (Palin’s jackets are, perhaps not coincidentally, primarily red, white or blue). Notably missing from her feet in recent days are the Naughty Monkey gold-buckled peep-toe heels that she purchased at Juneau’s Shoefly + Hudsons boutique before the convention and had been wearing on the trail. (It was revealed that the label is favored by Paris Hilton.) “I would say she made an effort to shop locally,” said the boutique’s co-owner, Sydney Mitchell, who noted Palin picked up a pair of Sofft black heels at the same time. “I think it took effort for her to carve time to visit local stores. I think she made a point to do that.” In New York, Palin wore dark pumps each day.

In the meantime, several fashion designers — known to be a mostly liberal-leaning bunch — are steering clear of peanut gallery observations and declined to comment for this story. One fashion insider who has felt free to put in his two cents, however, is Barneys creative director Simon Doonan. “It’s either love or hate,” said Doonan, who has made no secret of his Democratic partisanship. As for the impact of her wardrobe on voters’ minds, he added, “Nothing she wears will cause anyone to budge, so she might as well enjoy her clothes and go for a little flamboyance. I’m seeing a little Jackie Rogers, a little vintage Mackie.”