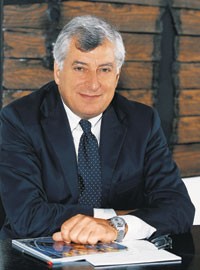 “The model has not changed. We are still a multibrand company,” said Bertelli, his lightweight blue suit providing the sole burst of color in a stark white meeting room at corporate headquarters here.

In an exclusive with WWD, Bertelli outlined the company’s priorities, which include tapping the potential of the Miu Miu brand outside Europe; launching a Prada men’s fragrance in 2006; expanding product lines such as the Prada Sport denim collection; determining the future of Helmut Lang as it talks with potential buyers, and perhaps bringing in a new designer at Jil Sander by the end of the year as it continues to restructure the brand.

All this as Prada progresses toward its goal of finally carrying out the initial public offering it has postponed four times. But Bertelli termed that a “secondary priority.”

“We can start to rethink the whole process at the end of 2006,” he said, before listing the more imminent tasks, such as growing Miu Miu and the fragrance launch.

Bertelli is quick to defend the multibrand model as a business strategy, despite the debt he’s incurred to construct his empire. He’s also swift to brush off market concerns about the 700 million euros, or $910 million, worth of bonds due in June, saying that he’s got an excellent relationship with the banks eager to do business with him.

“It’s useless for us to explain this [so many] times. Sept. 11 happened and we were supposed to [meet with analysts for the IPO] on Sept. 18,” he said. “That’s the whole story. If Sept. 11 hadn’t happened, we would be talking about other things.”

This story first appeared in the May 9, 2005 issue of WWD. Subscribe Today.

Although he freely admits that all is not well at Helmut Lang and Jil Sander, Bertelli is quick to cite his success stories with Prada, Miu Miu and acquisitions such as Car Shoe and Church’s. While many in the industry ponder the future prospects of all the small and medium-size brands that Prada, Gucci Group and LVMH Moët Hennessy Louis Vuitton snapped up during the Nineties buying spree, Bertelli defends the giants’ original logic, saying they saved many a brand from inevitable ruin.

“By virtue of becoming a part of groups like Prada, Gucci and [LVMH], these smaller brands stayed alive. If these groups weren’t there to sustain them, they would have disappeared,” he said.

Nonetheless, market watchers have urged both Prada and other luxury conglomerates to prioritize, especially when it comes to money-losing brands. They also have pointed out that, in most cases, multibrand groups rely on one or two labels for the majority of their profits and sales.

“Managing a brand portfolio requires making decisions, sometimes tough decisions to concentrate financial and managerial resources on the brands that are most successful and can create the most value,” said Andrea Ciccoli, vice president of consultancy Bain & Co.

There are indications Bertelli is doing just that. Prada split with designer Helmut Lang in March and last week confirmed it is in talks with potential buyers of the company. It isn’t clear, though, whether Lang would return to design the collection. Bertelli also declined to name the potential buyers.

“We have just decided to interrupt [the relationship with] Helmut Lang,” Bertelli said, clarifying that Prada will continue to fill outstanding orders and produce the collection until the end of the year, at which point he’ll decide whether to sell. “We’ll see,” he said.

Bertelli said any good businessman would have reached the conclusion he did: that the Helmut Lang brand just wasn’t working. The label already was seeing financial hardship before the designer left.

“If you see a brand that can’t find its customer base, that can’t generate the right level of turnover and it’s posting losses, you are going to have to proceed in a certain way,” said Bertelli.

Speculation has named Diesel or Tommy Hilfiger as potential contenders for Lang. Diesel owner Renzo Rosso has said Prada approached his company, but he’s not interested. A Tommy Hilfiger spokesman declined to comment, but a source close to the company said it is not interested. Several financial sources have said Helmut Lang could be a tough sell, as a money-losing company without its founding designer that has diversified too much out of its core sportswear business.

The Jil Sander situation is completely different, however. Bertelli said he plans to keep sustaining Jil Sander, despite market speculation that he may wish to part with that brand, as well. As reported earlier this year, Prada and Jil Sander management are using a team of people to preserve the namesake designer’s minimalist aesthetic rather than diverge into new territory — a misstep Prada acknowledges it made the first time Jil Sander said goodbye.

Bertelli said he’s still on cordial terms with Sander and respects her as a designer. He even heard from her a couple of months ago. But he denies the possibility of her returning for a third time.

“We made a decision not to carry on relations with Ms. Sander. We saw that the difficulties reached a point that we weren’t able to make radical [operating] transformations,” he said. Certain restructuring measures — such as a recent decision to move the remainder of the line’s production from Germany to Italy — should have been taken care of long ago, but Sander blocked them, said Bertelli.

Still, Bertelli said that he’s confident in the current style team, which earned rave reviews for its first collection last February. That said, he doesn’t rule out the possibility of hiring a new designer for the label.

“We will do things calmly, “ he said. “By the end of the year, we will finalize the new structure of Jil Sander, also on the design front.”

Bertelli would not be drawn on names of designers he would like to see at Sander. But when asked what he makes of men’s wear designer Raf Simmons, he joked, “Who’s that?”

It’s a bit harder to bypass name recognition when you’re talking about Tom Ford, or his new venture with Domenico De Sole to launch Tom Ford eyewear and beauty lines through Marcolin and the Estée Lauder Cos., respectively The licensing deals hardly conform to conventional brand-building methodology, but Bertelli likes the logic.

“Should Tom Ford have started competing with Gucci? [Should he] have started from nothing to make a product that competes with a company that he left a year ago?” he said.

Bertelli said he thinks it’s wise for Ford and De Sole to reach out to a broad consumer base with these entry-level products to build up a mystique behind the name. He thinks the duo will appeal to people’s “hedonistic” tendencies.

But Bertelli understands the Ford-De Sole gamble perhaps more than many other executives, for when it comes to breaking the rules, he has firsthand knowledge.

Bertelli recalled the skeptics who balked when Prada opened its $30 million SoHo store in New York just three months after Sept. 11. Designed by Rem Koolhaas, complete with high-tech touches such as dressing room video cameras, touch-screen monitors and a giant “wave” floor that dominates the 180-foot length of the store, some observers thought it excessive. Prada even was one of the first fashion and retail companies to use RFID chips, now a rage in retail information technology, thanks to Wal-Mart.

Bertelli knew he was taking a risk, but he said it paid off. (Prada since has followed the SoHo store — dubbed a Prada Epicenter store — with similar units in Tokyo and Beverly Hills.)

“‘It’s an enormous empty space and a small selling floor space,’ people said. They were not able to understand this concept,” he said. “This year, the store is taking in more than $35 million. And people said that this store would have failed and not sold anything?”

In fact, Bertelli said Prada’s sales in the U.S. are up by about 10 percent so far this year. He said he doesn’t see any signs of a slowdown in the U.S., despite some indications the economy could be headed for another slow patch. He said Prada is maintaining market share. Luxury generally remains one of the bright spots of the U.S. retail economy, with Neiman Marcus Group last week reporting its same-store sales rose 14.2 percent in April.

But Bertelli echoed many executives’ ongoing gripes about a strong euro-to-dollar exchange rate biting into exports and an overall sluggish European market for fashion and luxury goods.

He turned brighter on the prospects for Asia, noting improving trends in Japan and promising signs from developing countries elsewhere in the Far East, especially China. He sees a growth parallel between contemporary China and Japan in the Fifties, but he said this analogy has its limits. Japan turned inward and isolated itself to grow, while China internationalized itself quickly to fuel its boom, a key difference, in his mind.

“We have to think about all of these Chinese people who are traveling all over the world and becoming new consumers in product categories, from Ferraris to Prada bags,” he said.