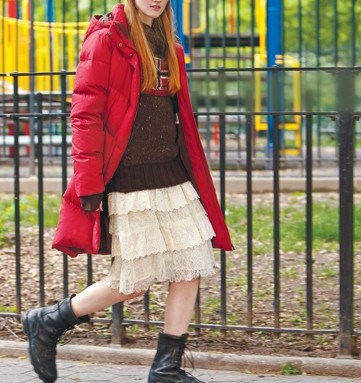 More than just fluff, winter’s chunky outerwear is meant to be stylish-yet-cozy when the mercury drops.

Burton Snowboards, a go-to label for most hard-core shredders, has made sure to address the casual consumer. This winter, its B by Burton line features slim, cropped shapes and hip belts inspired by urban biker-jacket styles. “We are always trying to bridge the gap between function and flavor,” says Jill Lighthart, Burton’s creative director for women’s outerwear. “Our coats are functional, but we incorporate an element of femininity tailored for the mountain and the streets.”

At Eastern Mountain Sports, a retailer that produces its own line of outerwear, appealing to a broad customer base through design has become a way of life. “The bulk of our business is the ‘multisport’ category,” says Sandra Rossi, women’s division product manager. The category features low-loft down with traditional baffle lines for a less bulky quilting and longer lengths for the younger customer. “It’s more fashion-forward than the pure performance divisions.”

But design inspiration isn’t the only catalyst behind this shift in the market. Changing weather patterns and unpredictable snowfall are also forcing manufacturers’ hands. A mild winter can wreck an entire year, leading to devastating markdowns, so buyers want less risky options. “Most of our requests have to do with fabric weights,” says Micheli Colonna, general manager at Napapijri USA. “[Retailers are] ordering more multipurpose garments that transcend seasonality and function.” This year, styles featuring compressed down or zip-off powder skirts and linings that can be worn as jackets booked well. Spyder’s luxury Platinum series had a strong selling season as buyers sought alternatives to more utilitarian collections whose success is anchored to an uncertain winter. “We’ve always had performance and après-ski pieces,” says Laura Wisner, brand manager at Spyder, adding that now, such details as removable collars, slim shapes and a sophisticated color palette make the Platinum pieces strong crossover items “not only between ski and off-mountain, but between winter and fall, as well.”

But will the strategy play out at retail? “We’ve quit trying to be clairvoyant about the coming winter,” says Amy Rudeski, winter sports apparel buyer for Paragon Sports in Manhattan. The hope, of course, is that if there isn’t enough powder for the boarders, sales of lightweight shells and cropped styles to city slickers will soften the blow.

“My clients tend to be avid skiers,” says Liz Lamanna, manager and buyer for Brooklyn’s Panda Sport, “but we’re certain to have a selection of the colors and shapes that are trending on the streets each season.” Customers with special requests can be accommodated, too. “If you say you want a purple coat with one arm shorter than the other,” notes Rudeski, “we can probably make that happen.”