The Rainbow Connection: Zandra Rhodes Reflects on 50 Years of Design

Everything begins — and ends — with the prints, says the designer with the highlighter-pink hair.

LONDON — The secret is in the screen-printed silks.

Dame Zandra Rhodes is ready to lift the hot pink curtain on a 50-year retrospective of her work, but the clothes — the caftans, sparkly Eighties dresses and breezy belted gowns — tell only part of the story.

Textiles, instead, are the stars of this show: They’re colorful, hand-drawn, hole-punched, cut, pleated, burnt out, appliquéd or embellished with sequined landscapes or hand-painted buttons.

They are the alpha and the omega of Rhodes’ collections, and that will never change, said the designer who turned 79 last week, and whose magenta bob is glowing as brightly as ever.

During a preview of “Zandra Rhodes: 50 Years of Fabulous,” which opens Friday and runs through Jan. 26, the designer admitted she still walks around with big sheets of drawing paper pinned to her clothing so she can see how her sketches will move on the body once they’re printed on a garment.

That’s one reason why more than half of this show is dedicated to Rhodes’ printed silk chiffons, and her methods for making them.

WATCH: Zandra Rhodes Looks Back at Her Life and Career

In addition, an entire room has been given over to her sketchbooks and blown-up images of Rhodes’ colored squiggles, waves, curlicues and abstract nature drawings, which have a raw-edged, naïf look and magnificent layers of color.

“Textiles have always informed the garment,” said Rhodes, who was dressed in a yellow silk chiffon dress of her own design. It had a scattered flower print, a gossamer neckline and she cinched it at the waist with a thick satin ribbon.

“I’ve often thought about people who aren’t textile designers. Where do they start? Often, they just go in and chop up the fabric; they don’t consider what print can do for you,” said Rhodes. “I also like looking at folk things and old costumes, and seeing what those prints can do, what kind of detail they can bring.” 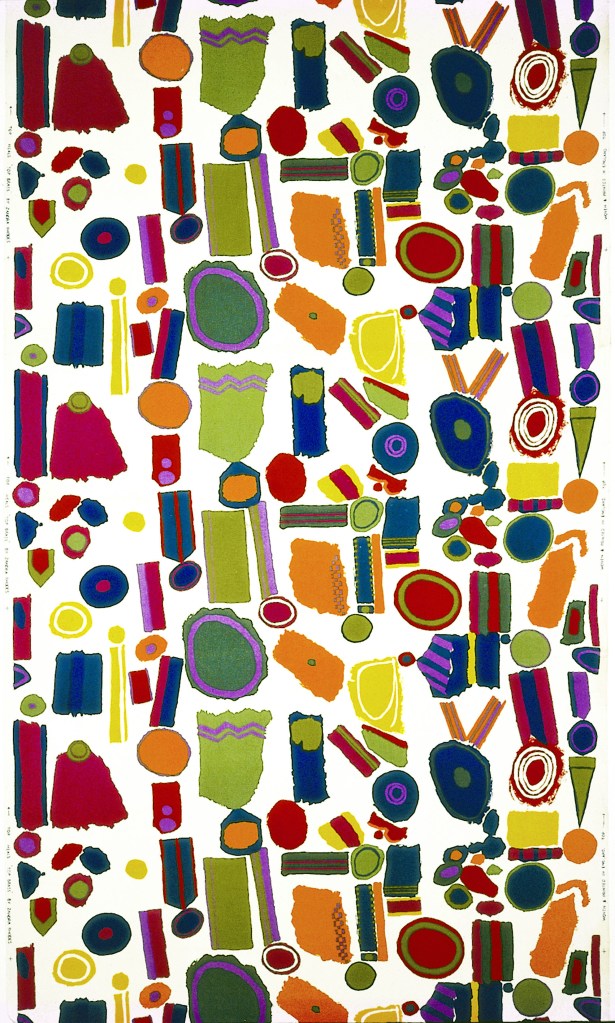 To wit, the scalloping on the fluttery collar of Rhodes’ yellow dress reflects the curve of its printed flowers. In one part of the show, fabric banana leaves sprout from the bodice of a long dress with a similar fruity pattern, while a drawing of the Manhattan skyline has been picked out in sparkles and sequins on a bright pink Eighties dress.

Quilting circles, Fair Isle sweaters, knitting patterns, feathers, and even the curves of jigsaw puzzle pieces have all inspired Rhodes’ silk fabrics, which are hung like fabulous flags in the show’s “forest of chiffons” upstairs in the exhibition.

When Rhodes’ prints and drawings haven’t been placed or scattered across dresses, caftans, scarves and shawls, they’ve been transformed into cutouts or appliqués. The show features a bright flower corsage pinned to the front of a black “Dinosaur” coat with exposed seams, while appliquéd fabric peacock feathers adorn a black ruched dress. Princess Diana wore a similar dress during a state visit to Japan in 1986.

During the walkthrough, the show’s curator, Dennis Nothdruft, described Rhodes as a pop artist who has chosen the medium of fashion and textile design. He said she could have easily been a painter or a sculptor.

So bound is Rhodes to the process of brainstorming and sketching prints that she uses a Japanese paper notebook where it’s impossible to rip out the pages. She believes textile designers should be able to live with their drawings — good and bad. If they don’t like them, she said, they should draw over them, “or figure out what went wrong.”

Nothdruft also described the flamboyant Rhodes as “an extended art project. She was drawing on spit curls, using face crayons and gluing feathers to her hair when she was working with Leonard,” said Nothdruft, referring to British hair stylist — and legend — Leonard Lewis, who created Twiggy’s look, and whose clients included everyone from The Beatles and David Bowie to Bob Marley and Jerry Hall. 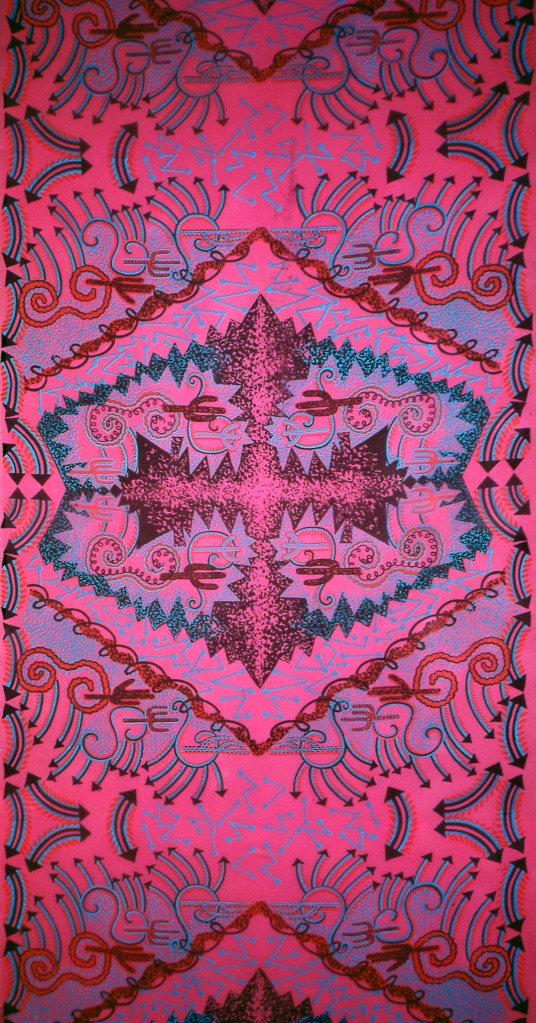 With her knack for statement-making, Rhodes was a natural for the stage, too. The exhibition highlights outfits ranging from a replica of the silver, pleated phoenix-like cape that she made for Freddie Mercury in 1976; to the hippie top-and-trouser combo that Barbra Streisand wore for her Hyde Park, London, concert earlier this year.

A lineup of glittery, dramatic — and suitably garish — opera costumes, for “Aida,” “The Magic Flute” and “The Pearl Fishers” are also on display and the designer admitted she likes making a “size 18 woman feel like a fairy princess. I like making them look slim so they can waft around the stage.”

Pieces from “50 Years of Fabulous” came from the 100 chests of clothes in Rhodes’ possession and from her 50-strong archive of sketchbooks. “I’m a hoarder,” she said unapologetically.

Rhodes is also a fighter: After graduating from the Royal College of Art in London, she had very specific ideas about textiles, and was always aware of their power. Not everyone agreed. 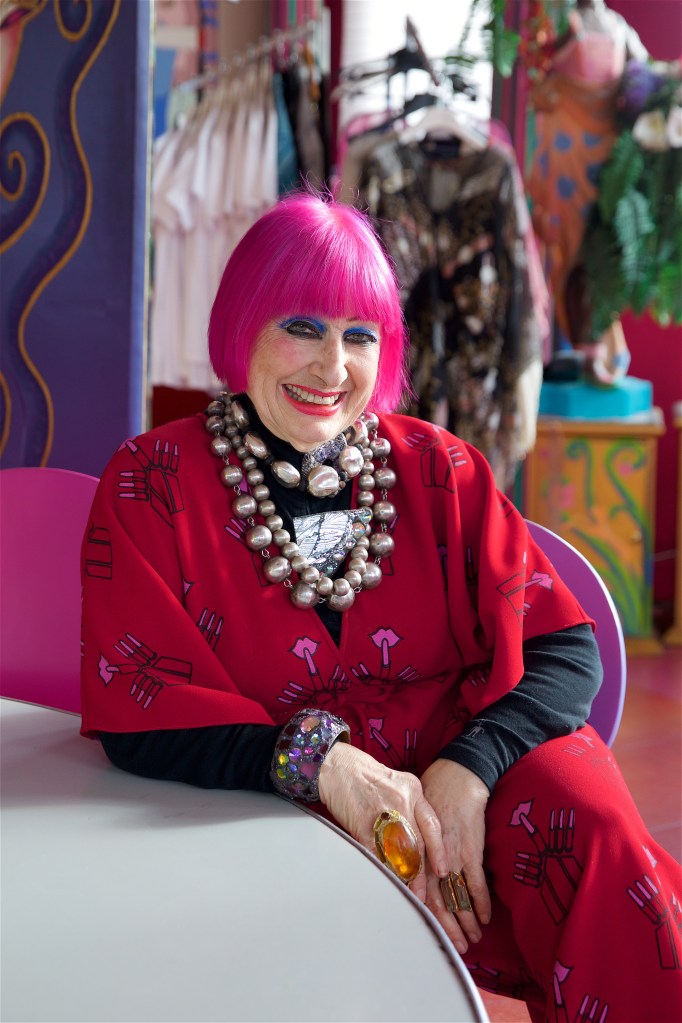 In 1965, the same year she graduated from the Royal College, she created the spectacular lipstick-print belted skirt which opens the show, the little red bullets shooting in multiple directions like rocket ships.

Once she decided to work with textiles, she recalls seeing a potential client up in Manchester who dismissed her colorful patterns as “too extreme.” She didn’t listen.

She is just as resilient today as she was then: “In fashion, you go up and you go down, and my hope is that I can keep swimming along. You have to find a way to keep going — that’s the main thing.”

Nothdruft, who also edited the book that accompanies the show “Zandra Rhodes: 50 Fabulous Years in Fashion” (Yale Books), put it another way. He said fashion years are like dog years, “so a 50-year career might as well be 350 years. And there are not a lot of designers who are still around,” to celebrate that.