The Real Diehl: Left of Center

At the House of Diehl, fashion design is a philosophy, a business, a work of art and a means of self expression. 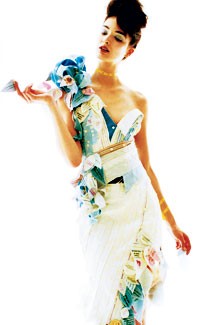 NEW YORK — Designer Mary Jo Diehl was ready to go to court to fight the $30 ticket she received for selling secondhand clothes on a Williamsburg, Brooklyn, sidewalk last month. The way she sees it, fashion is art and should be permissible to sell on city streets.

“People forget about the artistry of fashion,” Diehl said. “All artists want to connect with people. Fashion designers have it easier than anyone else, because they are literally touching their customers with their work.”

Although she got word Monday the charges were dropped, her willingness to debate the issue was rooted more in principle than financial need. House of Diehl, the collection she designs, is meant to be thought-provoking.

“I think fashion should make you think,” said Diehl, a native New Yorker. “We are a visually sophisticated society. Fashion is a language that tells stories and shows what the world looks like at this important time.”

If all this sounds a bit philosophical, that’s not by chance. Diehl and her business partner, Roman Milisic, were both philosophy majors in college and first became friendly by swapping philosophical ideas. Neither studied fashion or business, but their unconventional approach is earning them fans in the fashion and art worlds.

During an interview in House of Diehl’s lower Manhattan studio, the pair outlined several initiatives. Among them:

House of Diehl, along with Zac Posen, Damien Loeb, Zoya Todorovic and Nancy Whiskey — all of whom have offices nearby — are doing what they can to help revive the downtown real estate market. On a broader spectrum, the company is determined to have a global reach to build sales, and Diehl and Milisic are willing to spend months on the road to try to make that happen.

With the introduction of its ready-to-wear, House of Diehl wants to double its annual unit sales this year to more than 3,000 units. The company will continue to develop one-of-a-kind pieces that can take months to complete. Milisic declined to provide a figure for annual sales. He said the company is in the black and plans to court financial backers.

Consider the firm’s Brand New Me group of dresses and separates made from plackets of vintage men’s button-down shirts. Leaf-shaped pieces of men’s shirts imprinted with the wearer’s contact information serve as detachable business cards. The Brand New Me name pokes fun at the branding frenzy among designers.

“You’re giving a piece of yourself to a person, and that makes you have contact with that person,’’ Diehl said. “My clothes are a passport to any sort of experience you want. They make every person who wears them feel like a celebrity.”

Diehl and Milisic have made names for themselves with “instant couture” — public performances where they pick a person and design an outfit in 15 minutes or less. The Warholian time frame was meant to be tongue-in-cheek, but the overall aim is to make potential customers part of the design process. Now they are securing sponsorship for next year’s instant couture 10-country tour, with stops planned for Paris, Milan, Berlin, Asia and South Africa.

The new rtw collection wholesales from $100 to $1,200 — a bargain compared to House of Diehl’s one-of-a-kind pieces, which are in the $8,000 to $10,000 range. Accessories are also offered in the rtw line, including a belt that looks like a tape measure and a T-shirt that reads “I Know What You Did Last Season.” The latter was featured in one of Henri Bendel’s Fifth Avenue windows earlier this month.

“It’s always been interesting to me that fashion and intelligence are antagonistic. Women use fashion as a tool to express themselves. But if they look too good, they’re assumed to be unintelligent,” Diehl said. “We create fashion for very sophisticated, savvy women.”

As a sign of how the company is melding fashion and music, the spring 2005 collection includes a customized “DJ belt,” which allows buyers to select miniature versions of their seven favorite album covers, which are slipped into the belt’s insets. Covers can be changed. To create a buzz about the item, belts are being given to Junior Vasquez, Eve, Princess Superstar and Bjork.

“If I’m going to put something out in the world, I don’t want it to have existed before,” Diehl said. “These are essential, effective networking clothes. They are the ultimate icebreaker.”