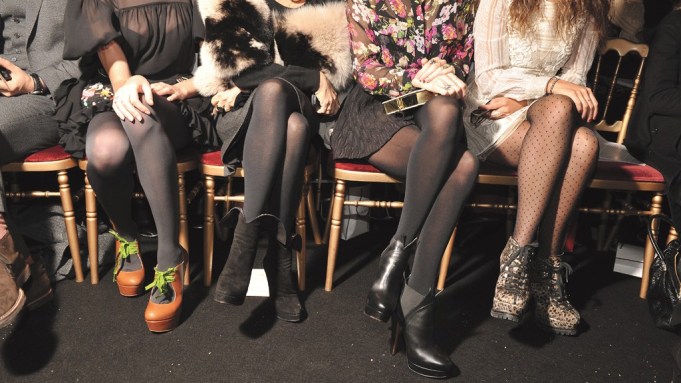 Editor’s Note: Famed Hungarian Countess Louise J. Esterhazy today rejoins WWD as a columnist. She began writing her missives for the paper in the Seventies (at a VERY young age, obviously) and went on to pen them for WWD’s then-sister publication, W. Now she’s back, with dispatches from her schloss high in the Alps; the salons of Paris, New York and beyond, and wherever the dear countess’ travels may take her.

I’m sitting in front of the designer of the 20th century, Coco Chanel, watching her fit a suit jacket. Her hands are quite steady, but suddenly there is a slight slip and she nicks the shoulder of the model. A small drop of blood appears, but nothing is said and Chanel continues to the other shoulder. She cuts and cuts and cuts, focusing on the perfectionism she always demands.

That’s the beginning of my evening with Coco.

Later, upstairs in her huge apartment, we sit on a beautiful suede couch and whisky is served. She then suggests a little red wine before dinner and we start to talk. Close up, Chanel has a certain animation and her eyes are as sharp as a beaver’s at work. And she never does stop working.

Chanel begins with her usual harangue about how all the other designers are, in her words, “a joke.” Balenciaga doesn’t know how to cut a pair of pants, Yves Saint Laurent can’t cut a jacket, and on and on. Then she turns on me, telling me my suit jacket is horrible and I should change tailors (it was by Anderson & Sheppard). She grabs my arm and raises it, then begins pounding me in the armpit. I was afraid I’d end up with a CC bruise.

“You don’t understand,” she says, hammering away. “A good jacket should be nailed to your arm.” I thought about the poor model, bleeding downstairs.

Chanel turns from me to another of her pet peeves — short skirts (thank god I was wearing pants). “Short skirts are all wrong,” she insists. “Let’s face it — the knee is the ugliest part of the body.”

What, I ask, is the ideal length of a skirt? Chanel bounces off the couch and starts to pound at her skirt. I notice her legs aren’t that bad for someone in her 80s. “This is the right length — see, it goes up and then goes right back down again to cover the knee.”

Another whisky appears, then another glass of red wine. “Women who are desperate wear short skirts,” she insists. “They are not flattering and do not move well. And that goes for all ages. Women who want to be young think if they wear a short skirt they lose the years.”

By this time I feel slightly tipsy, and I get even more so as our dinner goes on and on and the wine continues to flow. I start to worry about how I’ll feel the next morning. Chanel must have read my mind, for she offers me a little blue pill, which she promises will prevent any hangover no matter how much I drink.

She then stands up and asks if I would walk her back to the Ritz. How can I refuse? We take the elevator up to her room, I watch as she is heavily tucked into her bed and, at the last moment, her Deauville hat is removed (after all, that’s where it all started). I give her a kiss on the head and off I go.

Often I am in awe of famous people (never egomaniacal designers) but I am relieved to be going home at last. (And the next day, I feel absolutely fine with no semblance of a hangover. I never manage to find out the ingredients of Coco’s magical blue pill.)

But my evening with Chanel has stayed with me all these years, and I have always remembered her dictate against short skirts. Having come down from the family schloss in the Austrian Alps to indulge in the glamour of Paris, I sit in one of the best hotels in the world, the fabulous Hotel Le Bristol, part of the Masterpiece Hotels collection, which is aptly named, for the Bristol is truly a masterpiece. All I see around me are women in short skirts exposing their ugly, bony knees. Chanel would be horrified, as am I, but I’m afraid it is a losing battle.

A few days ago, as I sat having the most delicious lunch in Le Jardin Francais restaurant, I espied a striking, tall woman who I at first didn’t recognize but who wanted my table. The maître d’ politely replied, “You can’t, madam. That’s the Countess Esterhazy’s table.”

Meine Gute! I knew her! It was the Queen of Paris, and some say the Queen of Elegance, my fellow countess Jacqueline de Ribes. Everyone in the room stopped to look at her as she walked to her table (no wonder she was born on Bastille Day — 83 years ago). I watched too, and — quelle horreur — she was wearing, you guessed it, a very short skirt, as well as a fur hat, boots and dark glasses. She nodded to me (we countesses always acknowledge one another) as she walked aristocratically to her table.

So even she, like all of us, wants to be younger and wears short skirts. No doubt the short-skirt desperadoes travelling to New York, London, Milan and Paris to view the fall shows will try to do the same, with numerous women sitting in the front row exposing their bony knees.

Perhaps it’s all right if even a fashion icon like the Comtesse de Ribes wears short skirts. But I don’t think so — the knees are still ugly.