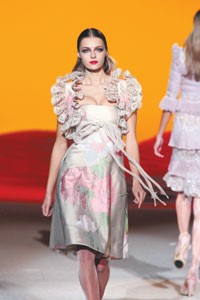 Christian Lacroix: Showing a fairy tale of a couture collection, Christian Lacroix gave a master class in quirky glamour, playful pomp and the joys of unbridled extravagance on Tuesday night. Program notes and invitations came printed with the number 38 — a nod to the designer’s long run on the runway — but no one in his audience needed a reminder that Lacroix knows his way around the couture atelier.

He focused on scores of evening looks that had their exuberance in common, but were otherwise fabulously varied. Examples of the house’s exquisite handiwork ran the gamut, showcasing painted chiffons, antique-looking embroideries and intricate old-school draping. Eighteenth-century frock coats and flashy matador boleros topped feather-light dresses with a cheeky theatricality. A gown in printed silk came swagged across the bodice with bejeweled chains. Then, with a fleet of angelic lace numbers, Lacroix whipped up more froth than a midtown barista at rush hour. Best of all, he did it with a richesse rich enough to let everyone know the house’s new owners, the Falics, have ponied up the means to support Lacroix’s couture efforts big time and to turn his dreams into a reality. As they say, you get what you pay for.

Valentino: When it comes to pleasing his ladies, Valentino is a stickler for tradition. And where better to flaunt that dedication to his clients and the clothes they love than at the couture? The international social set came out in force for the show on Monday night and they couldn’t have left disappointed, because while Valentino’s set full of techno dunes looked futuristic enough, the clothes he showed were classic Val.

A refreshing irreverence for trends defined the collection, which included wasp-waisted suits, tiered cocktail dresses and, naturally, gowns galore. Occasionally the clothes were burdened by too much beading, too many flounces, too many bells and whistles. Nobody ever accused Valentino of minimalism, but the ladies like their Val as is, which is to say to the max.

As ever, Valentino’s glamorous gowns were brimming with personality, just like the stars who flock to the designer each awards season. Take, for instance his opening number, a glimmering dress with a woven bodice, or any of the flounced floral fare blooming with roses and pink peonies. They’re not for everyone. But then, that’s the point.