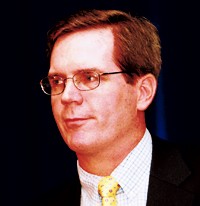 Having a reasonable acquisition price will get a buyer to first base, but often it’s the chemistry and compatibility among the key players that will determine whether the proposed merger makes it to home plate.

For apparel consolidators, the quality of the existing management team and the likelihood of its members staying on post-acquisition were concerns frequently raised in a financial panel discussion on the “Season of the Deal.”

For firms such as Kellwood, the quality and chemistry of the management team is in some ways just as important as the purchase price. “We always keep management. In fact, we buy management, so it is important to us that they’re not going to retire and, of course, there’s the chemistry factor,” Upbin said.

The ceo disclosed that he spends a great deal of time focused specifically on analyzing issues involving chemistry of the individuals and their potential compatibility in a large company environment.

“We at Kellwood are proud to stay in front of the curtain. The merchandising, design, sales and so on are really left alone. For the most part, that is what you’re buying. So it is crucial that [the existing management team] understand that they are going to be able to focus in those areas and run the businesses that they have and be free of the corporate guys,” the ceo said.

He acknowledged that sometimes situations can get dicey, noting one instance where one brother went after another with a baseball bat.

Bleser observed, “We’ve had a few that sat face-to- face with each other and literally didn’t talk for four or five years.”

Harrison noted, “Chemistry is all important in a deal and we’ve seen more deals blow up because the principals get in a room and just blow it.”

He gave as an example an apparel firm that was keenly interested in acquiring a specialty retailer. According to Harrison, when the key executives — the chairman of the buying firm and the owner of the specialty retailer — met, the chairman said, “Hello, Dick,” in greeting. The owner’s immediate response was, “My name is Richard.” The investment banker said that he knew immediately that the deal wasn’t going to happen.

“The chairman told me that as much as he wanted [the retailer], there was no way he was going to buy this company,” Harrison said.

Harrison pointed out that while it is sad when those situations occur, sometimes that becomes the driving point for people to sell their businesses.

“In many [instances] partners have irreconcilable problems and the only way to solve them is to let a third party buy them. Sometimes, unfortunately, you end up losing both of them because one won’t work without the other [or] one won’t sell unless the other leaves. People are crazy,” he said.

Bleser added that sometimes, too, sellers can be their own worst enemies while waiting for the sales process to conclude.

“You have to run a good business and have a good brand. The chemistry is all important, but as you go through a transaction, I’ve seen a lot of owners who just take their eye off the ball. They’re moving toward a [completion of the sale] and exit as opposed to continuing to run a business, which remains all important,” he noted.

All of the panel members said they expect to see more mergers in the coming months.

According to Harrison, “In the past 12 months, we’ve seen a huge pickup in activity. At the same time, the size of the deals has gone up slightly. It [averaged] $150 million in the last 12 months and $136 million last year.”

Bleser observed, “We see sustained financial growth and the financial market’s in great shape. There’s a lot of money out there.”

The banker was referring to the availability of different financing vehicles. One example involves firms using cash on hand to fund the so-called bolt-on deals, such as VF Corp.’s acquisition of Nautica or Liz Claiborne’s purchase of Juicy Couture. Another vehicle for financing deals involves access to the high-yield bond market, a favorite among firms utilizing the transactional scenario such as Phillips-Van Heusen’s purchase of Calvin Klein International or Oxford Industries’ buy of Tommy Bahama. For much smaller acquisitions, he noted, there’s no lack of private equity firms with cash on hand looking for a place to invest.

For Upbin, there are two questions that he gets asked frequently: What is the process? What does Kellwood look for?

The ceo described a process that he refers to as the “half-life.” The firm looks at about 100 possible acquisitions annually, quickly narrowing that number to 50 and then cutting that down in half again to 25 possibilities. At that level, others within the Kellwood company start to get more seriously involved in the process to help eliminate at least 12 more companies. Once the number is lowered to six, the company begins active negotiations.

“From that point on, price is a major factor. At the end of the day, we wind up with three deals or so. We’ve had 27 deals in the last 12 years,” Upbin said.

With Kellwood a major consolidator in the industry, one would think that the firm itself has played a key role in contacting potentially new family members.

“Almost none [of those deals were] initiated by Kellwood. We found out early on — at one point we sent letters out — that when we meet the people at firms we admire, invariably the companies are not for sale or are priced insanely. We really do rely on our investment bankers and lawyers [to identify possible candidates],” Upbin said.

According to Bleser, many of the deals that get done do not involve turnaround situations. “Turnarounds can be difficult. They take a lot of time and effort and if the brand is slipping, it takes a lot to bring it back. In the distressed situations, there will be a bargain here and there because [of] overleverage. In the Liz Claiborne/Monet deal, [Liz] got a real bargain and it was a great acquisition for them, but those deals are few and far between.”

Harrison noted that in his experience in the last two to three years, he’s seen a few companies in need of restructuring that have required the capital of larger firms to effect the necessary changes.

“However, I will say that the majority of the companies are profitable, healthy and growing companies where the owners have a special need that [requires them] to sell,” he added.

Upbin concurred, observing that in the last couple of years, many of the companies that his firm looked at were for sale, not because of estate planning issues, but because of some other need.

“Probably more than any other reason, the company reaches a certain plateau in size, whether it is management capabilities, inability to source or the inability to deal with the Wal-Mart and Target that have gotten very large and very demanding in how you distribute the product and how you source. So there are a lot of reasons why a company today under $100 million, or even over $100 million, would find it very difficult to go forward and be competitive. We source for $2 billion of sales. It makes quite a difference,” the ceo observed.

Harrison added, “It is becoming harder for smaller companies to get on the buying matrix of [the large retailers]. They need the ‘big brother’ that Kellwood is going to offer them.”