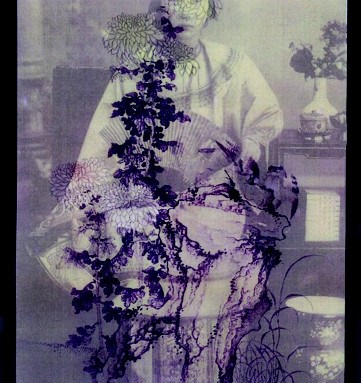 Manicured gardens, nature, right down to the humble jellyfish, and muses such as Pina Bausch and Louise Bourgeois are among designers’ inspirations for spring.

“The collection follows a very translucent and delicate palette with an allusion to ancient Chinese aesthetics. Silk tulle cocoons, feathers and pieces kissed with real gold add the finishing touches to an overall romantic and fluid homage to an age of dynasties and emperors.” — Georgina Chapman, Marchesa

“The dichotomy of the two sides of a woman, the good and the bad.” — Laura Poretzky, Abaeté

“Politically troubled territory: war zones, countries under totalitarian rule or under foreign domination….Clothes of ethnic groups and the military uniforms of the armies that bring war to these parts.”
— Alexandre Herchcovitch

“When I was sailing in the British Virgin Islands, the feeling of the breeze hitting my face inspired the movement of my dresses, and the exotic colors of the veiled ocean floor were so unforgettable that they formed my prints.”
— Diego Binetti, Binetti

“The original ‘A Chorus Line’ in the Seventies mixed with the pixilated images from early Nintendo video games.”
— Catherine Holstein

“Slim Keith on a shooting weekend in California.”
— Chadwick Bell

“Where were you between ’88 and ’92? What were you listening to? And what were you wearing?”
— Charlotte Ronson

“My inspiration is the sun. I spent a lot of time watching the way light transforms whatever it touches, the way the sun paints the white walls of Santorini pink, then purple, as it sets.”
—Christian Cota

“What the lady wore when she tagged along with her best friend to the Ramrod.”
— Jeffrey Costello and Roberto Tagliapietra, Costello Tagliapietra

“The spirit of Isabelle Eberhardt, who masqueraded in men’s clothes while traveling the Sahara.” – Elise Overland

“Splashing through the history of swimwear, the show is a retrospective to poolside glam.” – Gideon Oberson, Gottex

“I was in Copenhagen during the White Nights, when the sun is out all day and night. In the evenings, I felt as if I were sleepwalking in daylight, blurred between dreams and reality.” – Hanii Yoon, Hanii Y

“All things aquatic along with the ethnic inspiration of India, the glitz of Bollywood and a touch of ‘I Dream of Jeannie.'” – Holly Dunlap, Hollywould

“The dynamic energy of Spin Art and the Color Field school of painting.” – James Coviello

“How to Lose Everything/Everything in its Right Place.” – Jen Kao

“The punctured and slashed canvases of Lucio Fontana, produce packaging (like bags for grapes), concrete relief in Brutalist architecture and a continued exploration of geometrically based garment cutting.” – Jeremy Laing

“A piece of brown paper inspired a video we created for SHOWstudio’s current FutureTense project. That laid the foundation for the season.” – Joel Diaz, Jolibe

“I was inspired by Twenties movie stars gracing the silver screen with their fascinating style and alluring personalities, in particular Louise Brooks.” – Koi Suwannagate

“In the surreal yet charming spirit of this photograph, by J. Baylor Roberts, we decided to let loose, have fun and look into the depths of the sea for inspiration.” – Johanna Uurasjarvi, Leifsdottir

“I wanted to go back to the roots of the brand: clothing that defines and enhances the female form. I wanted to strip the collection to its purest form in order to begin to define my vocabulary.” – Raul Melgoza, Luca Luca

“Inspired by a feeling the feeling of opening up the summer house after the winter/the feeling of fresh spring air when opening the shutters/the feeling of the first rays of spring sunshine on your skin/the sound of the breeze blowing through the tall grass/the first walk on the beach/the start of a new shell and beach stone collection.” – Tina Lutz and Marcia Patmos, Lutz & Patmos

“I came across an image advertising an exhibit at the Musée Galliera. ‘Les Années Folles’ was the title; the decade from 1919 to 1929, the subject. What an amazing time of experiment and change.” — Charles Nolan

“I went from an obsession with corsets to a fixation on the Chrysler Building. What relates the two things, for me, is a sense of structure.” — Wilfredo Rosado, Mañuel

“The light and airy Bedouin styles and the cool sophistication of New York’s Upper West Side.” — Meike Vollmar, Macqua

“The garden fantasy and the awakening of spring.” — Tracy Reese

“Turn on, tune in and drop out.” — Swaim and Christina Hutson, Obedient Sons & Daughters

“We were interested in applying sculptural forms to the body. The work of Naum Gabo was one of our visual references.” — Alexa Adams and Flora Gill, Ohne Titel

“A kaleidoscope of color and lyrical verses paying tribute to the ephemeral beauty of the Tang Dynasty.” — Zheng Luo, OmniaLuo

“My starting point this season was Grant Wood’s painting, ‘American Gothic.’ I know it’s counterintuitive, but I wanted to use that image to tell a story about American optimism, about the stubborn sense of invention that keeps us going when the chips are down.” — John Patrick, Organic

“This season channels ladies’ leisure [looks] that date back to the early Twenties.” — G-Star design team

“It’s an easy road map as an answer to the question, how do you get dressed? How do you put yourself together? Think of where you are going, the destination, how you want to feel there, and then get dressed.” — Patricia Field and David Dalrymple, Destination Style Line

“We are employing the soft, effortless look of previous seasons, but adding a new strength in structure throughout.” — Justin Thornton and Thea Bregazzi, Preen

“Long, straight, sharp, black and slick silhouettes, geometric shapes that, by the use of noble, fluid materials, come alive through the movement of the wearer.” — Rad Hourani

“Inspired by an old attic filled with costume jewelry and rolls of bright vintage fabrics, my collection takes a whimsical look at the past.” — Reem Acra

“Styles and personality are crossed in a way that allows art to contaminate fashion. Brazilian modern painter Gonçalo Ivo is the reference.” — Amir Slama, Rosa Chá

“I was obsessed with this fabric from the moment I first touched it. It has a soul of its own.” — Devi Kroell

“Spring is a play on volume, texture and layering done in graphic black and whites.” — José Ramón Reyes, Réyes

“The collection emphasizes the luxury of being a woman. The motto is lightness and volume.” — Michael Ball, Rock & Republic

“This season is about Forbidden Love. The dreamy quality of our paint-by-numbers print complements the passionate, ethereal lyrics of Robert Smith.” — Brian Wolk and Claude Morais, Ruffian

“The paintings of Emil Nolde and Paul Gauguin. Plastic farmlands and sugary brothels. The vain sparrow looking you straight in the eye.” — Sabyasachi Mukherjee, Sabyasachi

“This time I finally faced up to my ultimate icon: Karen Blixen. Outside of Denmark, people mostly know her for ‘Out of Africa,’ but really, she had two lives: a Danish one and an African one. I’ve tried to tell both stories this season, but, like Blixen, to tell them in one voice.” — Camilla Staerk, Staerk

“We are inspired by the intersection of nature and geometric forms, and mimicked that in our fabric creation and construction.” — Gabi, Adi and Ange, Threeasfour

“My main inspiration for the collection came from a book called ‘Inventive Paris Clothes 1909-1939,’ with photos by Irving Penn and text by Diana Vreeland.” — Toni Maticevski

“The psychology behind fairy tales and cartoons, which, despite their seeming innocence, can be pretty dark. I’m also looking at the work of Nina Bovasso.” — Ashleigh Verrier, Verrier

“Robert Altman’s masterpiece ‘Nashville.’ What was very inspiring in the movie was the strong cross-cultural musical influences that happened and still happen in Nashville and Memphis.” — Marcella Lindeberg, William Rast

“The vibrancy of culture.” — Brian Reyes

“I was drawn to the ocean and enchanted by the translucent colors of jellyfish, deadly in the innocent buoyancy.” — Yeohlee Teng, Yeohlee

“The opposition of free movement versus technology. How form changes under the impact of wind. The deploying and collapsing of a parachute, emulating the dance of a jellyfish.” — Victoria Bartlett, VPL

“I was inspired by Lee Bontecou’s ‘Plate 122.’ Her use of mixed media evokes a delicate-yet-powerful state of transformation.” — Richard Chai

“Rock Goddess… the power of a goddess  and the attitude of a rock star.” — Diane von Furstenberg

“Everything must begin with nature. The rings of a tree are the rings of life. They are a symbol of what we are in danger of losing. Without nature, we have no freedom, no hope, no creativity.” — Miguel Adrover, Hess Natur

“I love the way Alexander Girard and Marilyn Neuhart found inspiration in traditional folk art, but made it modern.” — Anna Sui

“I am inspired by the lavish beauty of this Sam Haskins image and the strength of true classic American tailoring.” — Tommy Hilfiger

“‘That very night, while removing his lavish costume, the bullfighter looked at his past and felt grateful for this suit that calls for a noble body and soul.’ — Pedro Soler.” — Phillip Lim, 3.1 Phillip Lim

“Spring 2009 is about earth works.” — Kate and Laura Mulleavy, Rodarte

“My collection was inspired by both the hard and soft sides of nature.” — Gilles Mendel, J.Mendel

“The time to focus (a newfound luxury) and some experience (my own: 10 years).” — Bryan Bradley, Tuleh

“From the colors of Yves Saint Laurent’s Majorelle Garden to the style of Marella Agnelli’s living room, we drew inspiration  from different interiors and exteriors around  the world.” — Tory Burch

“A reflection upon the tradition of sport. Quoting from a bygone era, inspired by its relaxed elegance and playfulness. In 1949, Adi Dassler registered his own handmade three-stripes trademark. In 2009, Yohji Yamamoto and Adidas will celebrate 60 years of the iconic three stripes.” — Yohji Yamamoto, Adidas, Y-3