The Rock Garden of Seaman Schepps

NEW YORK — Like the ladies it often serves in the treasure trove that is its Park Avenue boutique, fine jewelry house Seaman Schepps has long preferred to play a discreet yet revered role in the luxury market. But now the firm, best known for... 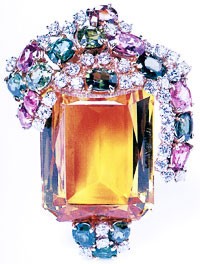 NEW YORK — Like the ladies it often serves in the treasure trove that is its Park Avenue boutique, fine jewelry house Seaman Schepps has long preferred to play a discreet yet revered role in the luxury market. But now the firm, best known for its chic turbo-shell earrings and unique combinations of precious stones, is gearing up to claim a bit more of the spotlight.

To celebrate its 100th anniversary — a century during which it served everyone from Marlene Dietrich to Doris Duke, the Duchess of Windsor to Elizabeth Taylor — a traveling exhibit dedicated to Schepps will open at the Museum of Art and Design in New York today. Meanwhile, “Seaman Schepps, A Century of New York Jewelry Design” (The Vendome Press), by Schepps’ granddaughter Amanda Vaill and historian Janet Zapata, will be published in conjunction with the show. The book is available in a limited-edition version, featuring a grid of nine tiny windows showcasing stones from Schepps’ original Forties inventory on its cover, for $495.

The exhibit and the book feature photographs, renderings, original advertisements, magazine covers, letters from clients and even sales receipts. There also are hundreds of pieces from the boutique and private collections, including items such as a ruby and diamond grouper brooch and an aquamarine, sapphire, pink tourmaline, emerald and diamond bracelet made for the wife of a Swedish industrialist. Aside from the centennial, there’s also something about today’s fine jewelry climate — vintage, color and whimsy-crazed as it is — that makes Schepps especially relevant. “It’s not a Schepps’ moment, because that implies it’s fleeting,” said chief operating officer Colleen Caslin. “Rather, it’s the right moment to rediscover the brand.”

The designers of the show’s installation, Massimo and Lella Vignelli, discreetly displayed the more than 200 pieces in the exhibit by setting them in flat cases on lead pedestals. “When you enter the show, you don’t see jewels — you have to hunt for them,” said Massimo, who credits Schepps co-owner Anthony Hopenhajm with doing most of the sifting through the archives. “It makes it more precious to look into [the case]. This is very dedicated to the piece.”

The same can be said for the brand’s newly focused strategy. In 1991, Hopenhajm and Jay Bauer bought the company from Schepps family members. Bauer admits the company was too concentrated on its storied past at the time, and its market impact had wilted. Since then, however, Hopenhajm and Bauer have made a number of improvements.

“When we took over, we extended the line substantially,” Bauer said. “We changed everything to 18-karat gold, improved the finish of the product. Clearly, Seaman Schepps was a genius, there’s no question about it. But we improved the manufacturing to make pieces easier to wear and a bit cleaner.” This year, the company has streamlined its logo and catalogue, which immediately boosted sales. Net sales for next year are forecast to reach $20 million.

Schepps’ future growth will include new retail locations as well as expansion of its wholesale distribution, which accounts for 25 percent of sales, according to Caslin. Schepps currently sells to 35 accounts worldwide, including Betteridge Jewelers, Geary’s Beverly Hills and William Noble in Texas.

In the past eight years, Schepps has opened boutiques in Palm Beach and Nantucket. In addition to introducing the brand to new retail markets, opening stores helps another part of the strategy: roping in new customers. And by “new,” it means younger.

“Ninety percent of the customers were from the tri-state area, with most in New York City,” Bauer said of the fiercely loyal jewelry mavens who collect Schepps pieces. But now he would like to court their daughters.

In the Thirties, Forties and Fifties, Schepps became well known for his avant-garde fine jewelry and his irreverence.

His designs were often inspired by such Hollywood icons as Carole Lombard and Lauren Bacall and Schepps searched the globe for jade carvings, pearls, diamonds, and coral pieces to create eclectic designs that were highly distinctive, often overscaled, and always in the vanguard of design. A piece might resemble an abstract painting, a Far Eastern statuette, or a feminine floral arrangement, in remarkable, playful combinations of colors, stones and shapes. Convertible jewelry, such as a pin that could come apart to become dress clips, was a favorite, and Schepps was one of the first in his metier to use everyday materials such as seashells, crystal and even wood. Chessman- or geisha-motif brooches were among his best-known designs, detailed with charming agglomerations of gold, diamonds and smaller colored stones.

As his designs would suggest, Schepps enjoyed a good joke. Once, when he noticed a competitor skulking around the windows of his boutique, Schepps offered the man a seat in the store, explaining, “if you are planning to copy my product, please sit down and be comfortable.” Although he was a bit of a dandy and many found him a charming raconteur, Schepps could be difficult, too. He once threw Louis B. Mayer out of his shop for asking whether he had any pieces that were less expensive than those on view, and the jeweler did the same to Gary Cooper when the actor complained about the price of a repair.

The designer wanted his woman to wear his pieces day and night, to see one on her dresser in the morning and put it on. And his high-profile customers seemed to agree. Doris Duke owned, and was photographed in, a number of Schepps pieces, including a three-piece suite of a grape-cluster brooch, a bracelet and earrings, all in cabochon sapphires accented with pavé diamonds and carved emeralds, while Andy Warhol had a moonstone and crystal bracelet. At the Sotheby’s sale of the Duchess of Windsor’s jewelry in 1987, Oscar de la Renta bought a version of Schepps’ signature turbo shell earrings for his wife, Annette.

These days, there is an overwhelming interest in colorful vintage pieces both in fashion and fine jewelry, and, while Schepps has always re-created a small number of pieces for sale, the firm is now kicking the concept into high gear. The archival collection, available at Schepps’ boutiques, will feature 10 designs of coveted pieces from the brand’s heyday, including Doris Duke’s 100-carat sapphire grape brooch and colorful 18-karat gold baroque necklaces.

“When Seaman Schepps created, it was about empowering women,” Caslin said. While Seaman Schepps is still about empowerment, the idea now is to go forward as a brand and create a strong identity, Caslin added. The book and the exhibit are expected to facilitate both.

“As new owners, it is also for us an homage to Seaman Schepps because of the extraordinary work that he did,” said Bauer. “To coincide this with the 100-year anniversary, and to publish the book at the same time, I think was a fitting way to value Schepps for the really great foresight he had.”

— With contributions by Lorna Koski