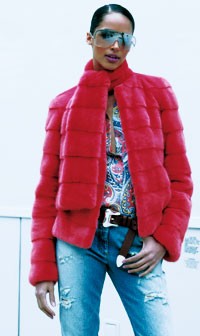 NEW YORK — Designers used fur extensively in their fall runway shows in Europe and the U.S., giving the $1.7 billion industry cause to predict healthy sales this fall.

This comes on top of a 13 percent increase in 2003 volume, according to the Fur Information Council of America’s survey of fur specialty stores and leased department stores. The figure does not include fur sales in department stores and designer boutiques.

Images of musicians such as Eve, Lil’ Kim and Ashanti wearing fur in music videos and out on their own have helped boost consumers’ interest in furs, especially Gens X and Y. With more companies offering lightweight, versatile styles that can be worn on an everyday basis, younger shoppers are being attracted to fur as a fashion option. More than half of consumers buying fur are now under the age of 44, according to the FICA survey.

“Fur has become such a mainstay in the fashion wardrobe,” said designer Dennis Basso. “There’s something for everybody — even 19-year-old girls are shopping for fur scarves and vintage coats.”

Mink is leading the charge as the most popular pelt, representing 65 percent of all sales, with sheared mink and shearling running second and third, respectively.

“Fur has been part of fall fashions for about 10 years now, so designers need to continually see new and innovative ways of working with the luxury material to keep them interested,” Gold said.

J. Mendel is responding to the increased competition by upgrading its already luxe collection. Designer Gilles Mendel said for the coming season, his atelier in New York “has devoted an increasing amount of time and expertise to create an even more couture line of furs.”

“We believe it is essential to distinguish ourselves in a market where fur has become a such an integral part of so many collections,” Mendel said.

To make fur more of a year-round item, J. Mendel introduced small shrugs in fox and in mink, and fur coats and jackets that are as light as suede. The company has four stores and plans to open two in the U.S. and one in Asia in the next year.

Basso is also on the move, with plans to open several stores in the U.S. and possibly Europe within the next few years. One unit is expected to bow in Chicago, Beverly Hills or Las Vegas within the next year. Basso already has a freestanding store on Madison Avenue and a boutique in the Little Nell Resort at the foot of Aspen Mountain.

Increased interest in accessories, an area that has been developed in the past year, has helped boost Basso’s overall volume. When shopping for coats, shoppers don’t think twice about buying fox collars, knitted fur scarves and fur hats, which retail between $500 and $5,000, he said.

“Fur has become a luxury element and not just for its warmth,” Basso said. “Our average shopper is a woman in her late 30s to early 40s.”

Alixandre Furs, the maker of Oscar de la Renta’s licensed fur collection, plans to announce a licensing deal with another designer by the end of the month, said Lawrence Schulman, vice president.

“Fur is definitely a designer business without a doubt,” Schulman said. “People are interested in quality and fashion.”

Based on the success of last year, the company plans to host more store appearances with de la Renta in 2004. About 15 to 40 pieces are sold at such events and 45 were sold at one last year, Schulman said.

“They are wonderfully deconstructed, very lightweight styles that almost could replace the cloth coat,” he said.

Alixandre Furs expects to increase its annual business by $1 million, through its new fur-lined Drizzle rainwear, which is being designed by Drizzle’s co-founder Jane Charney Lipman.

A. Kuehnert & Co., the U.S. distributor of Mackintosh, is also getting into the fur-lined business. The company has teamed up with Cassin Fur to develop fur liners and collars for its classic coats. Designer Sherry Cassin said she got the idea after seeing Mackintosh coats at a Bergdorf Goodman event and “recognizing how sumptuous and practical the coats would be lined in fur.”

Cassin is making removable liners and collars in sheared nutria, badger, raccoon and fox for the 160-year-old brand. They ship to Bergdorf’s stores beginning in June. Wholesale prices for liners range from $395 to $795 and collars range from $125 to $395.

Ronald Isley, a member of The Isley Brothers, has turned his attention to fur by introducing Mr. Biggs fur collection for men.

Isley will unveil a collection of his-and-her furs in stores this fall. Sable, chinchilla, mink, fox and rabbit are featured in the 85-piece men’s collection, which will retail between $800 and $1,500. Isley’s collection is being produced by Tendler Furs, a 75-year-old New York-based firm run by third-generation furrier Steven Tendler.

Another newcomer to the domestic fur scene is Russian TV commentator and designer Natalia Darialova. Sometimes referred to as “the Russian Barbara Walters,” Darialova, the host of a talk show seen by 50 million Russians, launched her fur and leather collection at Saks Fifth Avenue’s flagship in December. The line consists of $5,000 shearling coats, $10,000 mink coats and $2,000 fur wraps and will be sold exclusively at Saks this year. After seeing all the creations she had made for her TV show and other events, Saks Fifth Avenue vice chairman and chief operating officer Steve Sadove encouraged her to develop a collection, Darialova said.

“I try to create clothes that accentuate the female figure — clothes that are comfortable, glamorous and eye-catching,” Darialova said.

With business “booming,” Anne Dee Goldin has moved to a 5,000-square-foot space at 214 West 29th Street in the Fur District.

“Fur is probably more important than it’s been in recent memory and the collection is being well-received,” Goldin said.

Interest from European stores is helping boost sales, which are running at least 10 percent ahead of last year, she said. Shoppers are looking for accessories, a category that accounts for 20 percent of her business, as well as sportswear. By offering a variety of items beyond coats and jackets, Goldin’s collection “can be set up as its own little department in stores,” she said.

“What’s exciting for me is for all these years I did designer collections, but until last year never with my own name,” Goldin said. “Now we are being taken very seriously as a high-end designer.”

Another designer with a signature line, Helen Yarmak, said the appeal of fur is pretty consistent and universal.

“For women, furs and jewelry are not about warmth or comfort,” Yarmak said. “They are about emotion, attraction and the state of mind. Our clients look for exquisite craftsmanship and beauty.”

The collection is designed in Moscow, produced in Italy and sold in Russia, Europe and North America. The aim is to open a London showroom in the next year.

“In the fast-paced international fashion world, we love to defy old geographic stereotypes,” Yarmak said. “Our power is in combining sable and lynx, gold and diamonds, cashmere and silk taffeta. We do our best to make creations which are filled with imagination and fantasy, each being viewed as individual works of art.”

Lavelle Olexa, senior vice president of fashion merchandising and public relations, said, “We have had a very positive reaction from our customer. Currently, we are looking to not only enhance our N.Y. salon, but we are reviewing additional locations for future expansion.”

The opening was a bright spot in a somewhat difficult year for Ben Kahn Furs, which lost its president, Ernie Graf, in January at the age of 83. A memorial service is scheduled for Sunday for Graf, an affable industry leader, at the Stephen Wise Free Synagogue, 30 West 68th Street, in Manhattan.