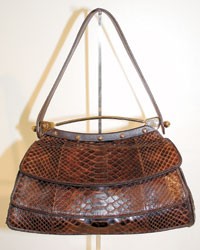 PARIS — The Alexander McQueen woman — as seen on the runway, at least — storms fearlessly through the world, unfazed by pools of water, rings of fire or snarling wolves.

So what might such a lady carry in her purse?

The designer laughed at the question. “It depends what she does,” he said. “I like the idea of a small pocket gun, if she was a secret agent.”

To be sure, McQueen’s new signature Novak bag — inspired by actress Kim Novak, whose best-known film is Alfred Hitchcock’s 1958 “Vertigo” — has an air of lethal chic with its “Alien”-esque anatomy and a look that is at once retro and futuristic. “There is a kind of strength and a bit of aggression in it; it’s almost like a cage,” the designer said in an exclusive interview about the project. “It does strengthen a woman’s appearance.”

And McQueen hopes it will do the same for his business, which is gunning for profitability by 2007, a deadline set by parent Gucci Group for its three emerging brands, which also include Stella McCartney and Balenciaga. Still, McQueen bristled at the suggestion that his accessories push and fall collection praised for its wearability, were the products of a top-down directive that was  obeyed. “Tell me what to do and I’m likely to do the opposite,” he said. “I just think [the collection] was relevant to today. It was more about the construction and the silhouette than excess detailing.”

Yet developing an identifiable, long-running handbag for the house, as Nicolas Ghesquière did for Balenciaga with his hit Lariat style, is clearly a driving ambition for McQueen. “My concept is longevity, like the [Hermès] Kelly bag or Chanel No.5,” he explained. “For me, [the Novak] is a McQueen classic. It has a personality of its own.”

The designer sought to express that personality via the shape, hardware, materials and details — not by splashing his logo across it. “When the Kelly bag was designed, it didn’t have Hermès written all over it,” he said. “Sometimes you have to rely on the design itself, not the name that’s on it.”

The Novak comes in a range of sizes, colors and materials and will retail from about $1,100 for a small leather version to $13,270 for a medium-sized crocodile number. McQueen has produced handbags in the past, and occasionally featured some on the runway, as he did with his “pirate” collection for spring 2003. “They sold quite well,” he noted. But fall 2005 represents the first complete collection — spanning everything from handy totes to delicately beaded evening clutches — and commercial push. His footwear collection — now manufactured by Sergio Rossi, another Gucci Group property — has been similarly broadened and offers everything from rough-and-tumble boots to delicately jeweled satin evening pumps. Jonathan Akeroyd, McQueen’s new chief executive officer, said the goal is to build handbags and footwear to represent about 30 percent of the house’s turnover in three years. At present, the category represents about 15 percent of sales.

Besides the Novak, a knitted handbag with a Navajo print and pom-pom decoration is another of the designer’s favorites. It’s an easy style he envisions worn casually; “something you chuck your keys into. It’s fun, and it looks cute with jeans.”

McQueen acknowledges he faces a great deal of competition entering the handbag arena, given that practically every major fashion brand has made leather goods a key expansion tactic since the luxury boom of the late Nineties. Still, he insists “the customer is always looking for something new.”

It might come as a surprise to hear the designer — who has shown women muzzled, harnessed and occasionally hobbled  — talking about the importance of matching your handbag with your shoes. But that’s exactly what he did in discussing the Novak, saying the version in crocodile practically cries out for matching crocodile slingbacks. “It’s a classic concept, devised by Chanel, devised by Jean Patou, devised by Hardy Amies in the Forties,” McQueen said. “It’s elegance that makes the woman.”

To build buzz around his accessories foray, McQueen plans to dispatch Novak bags to 50 key editors and celebrities in June. Meanwhile, the designer said he’s confident that his 11-year-old fashion house is on track to reach the profitability goal set by Gucci Group, which acquired a 51 percent stake in 2000. He noted that sales of the fall collection were up 33 percent versus a year ago and met budget targets. “And the shops are doing very well,” he added, noting that the McQueen flagship in London hauled in 50,000 pounds, or about $94,200, on a recent Saturday. “Not bad for one day,” he quipped.

Moreover, McQueen emphasized that he takes a long-term view to the development of his brand, and said that he has no regrets to date. “It’s going at the pace I’ve always wanted,” he said. “It was never about being a flash in the pan.” While the early years of his fashion career were about promoting McQueen’s name via some of the most spectacular fashion shows of modern times, he considers that the business is entering a new phase.

“All there is to do now is please the customer all the time, and deliver on time,” he said. “That’s the secret of a successful brand, but that takes time. And if all else fails, I can always become a nurse.” Then he burst out laughing at his own sally.