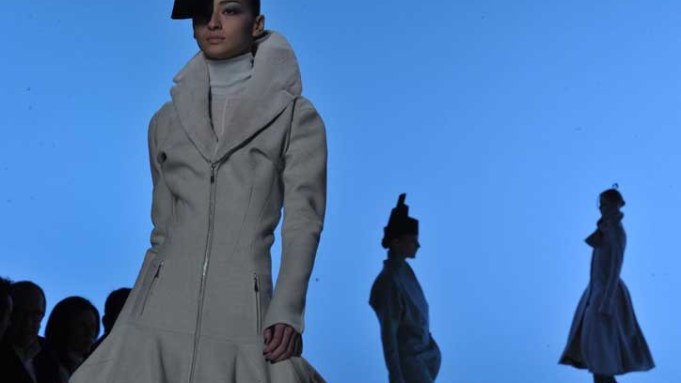 What is the shape of fashion? On one hand, it is in total control. The control of Miuccia Prada’s shockingly unromantic black lace. Of Marc Jacobs’ deliberately subversive sportswear and his big, brash sculpting for Vuitton. Of Balenciaga’s aggressive chic, and Yves Saint Laurent’s more aggressive chic. On the other hand, fashion continues to swirl in disarray brought on by the woeful U.S. economy, the thriving emerging market economies, the cultural obsessions du jour (celebrity, fake celebrity, 24/7 Web coverage—take your pick) and most especially by the communal industry exhaustion brought on by seasons, pre-seasons and post-seasons that roll relentlessly from one into the next.

From a fashion standpoint, at least, though the collections in total proved far from stellar, there was enough good news to ensure a strong fall season. A current of power chic emerged with a bravado that felt suddenly fresh and daring, anchored by those previously mentioned collections. At Saint Laurent, Stefano Pilati sought a look that “transcends literal notions of femininity.” With his strict cuts and the models’ demonstrative helmet hair, he succeeded. And who else but Prada would take that frothy staple of matron and ingenue alike, lace; strip it of frou and sentiment (not to mention the whimsy of her spring’s fanciful sprites), and deliver a collection that was as clinical as it was artistic?

Yet the season was far from one-note. Sometimes, this newly controlled fashion displayed a gentler bent. Vera Wang and Dries Van Noten veered artsy, the former with a fresh sexy sensibility, the latter with a lavish display of prints. At Christian Dior, John Galliano offered up a gleefully extravagant, big-haired ode to Baby Jane Holzer, while Burberry’s Christopher Bailey focused on terrific coats set off with knitted grunge caps and demonstrative jewelry.

Going the different-drummer route completely, some of the best shows were anything but restrained. After an off period he himself acknowledged, Alexander McQueen rediscovered his love of fashion via a fairy-tale romance about a girl who lived in a tree that worked in nods to Queens Victoria and Elizabeth II as well as colonial India, the latter in exquisitely wrought embroidered slippers and a fortune in Gem Palace carats. Then there was fashion’s favorite neophyte duet, the Mulleavy sisters, who at Rodarte spun their own romantic yarn, literally, with webby, whisper-delicate knits along with their now-signature intricate gowns. And speaking of romance, Comme des Garçons’ Rei Kawakubo did it her way, which is to say a bit warped, in a plenty-odd reverie on love and sex of the Hallmark valentine–meets-S&M variety.

In the midst of it all, jewelry emerged as the accessory of the moment. In addition to McQueen and Burberry, it was essential and directional at Marni; Van Noten; Wang, who worked with Philip Crangi, and Oscar de la Renta, who launched a collaboration with Loulou de la Falaise, inspired, she said, by Catherine the Great.

The season was notable, too, for a series of major house debuts, none of which were spectacular. While Alessandra Facchinetti and Peter Som fared reasonably well at Valentino and Bill Blass, respectively, in a much-anticipated effort, Marco Zanini showed he has a long way to go if the Halston mystique is to be revived.

Yet these days, the merch is only part of the story, and this season bore all of the now-inevitable trappings of marketing run amuck. Celebrities ranged from the real (Kanye West, Lindsay Lohan) to the surreal (Liza Minnelli, who swanned into Halston on the arm of Harvey Weinstein and cautioned her front-row mates to be careful of her coat—“It’s the real thing”) to a pair of reality-TV brats, publicist in tow, pouting that people had taken their seats.

Of course, when spectacle is done right, everybody still loves it, and no one does it better than Karl Lagerfeld. He delivered a one-two punch, for his Chanel set commissioning an enormous carousel done up with sculptures of the house iconography where the horses should have been, and at Fendi, getting Amy Winehouse to show up and sing at a party after two days of will she–won’t she gossip.

For all the moments of spunk and fun, a dangerous aura of over-it-all permeated the season. It came not from the increasingly important and omnipresent blogger set—they love it—nor from the ever-growing Asian and Russian contingents—they love it, their constituents can afford it and they are increasingly confident in expecting the status thus merited. Rather, the un-fun emanated from the traditional Western fashion audience, especially Americans just emerged from an endless pre-fall in New York with couture hiatus in the middle, which followed like this on the heels of spring, and who fretted like mad that, come fall, nobody will be able to afford anything anyway. The motif presented itself most transparently at Galliano’s show. On the last Saturday night of a grueling season, Galliano, who had installed an elaborate mock movie set, showed a good but not great collection about an hour late, causing many in his exiting audience to turn openly hostile, a sentiment surely not really directed exclusively at him.

Nor were such thoughts restricted to audience members. Some designers, too, found themselves spent, so much so that Viktor Horsting and Rolf Snoeren used their exhaustion as a starting point for their collection. “More than ever we felt the pressure to perform,” said Horsting. “Our first inclination was to say, ‘No way, we don’t want to do this right now.’” Since they had to, they worked the idea into a “glamorous protest” featuring well-tailored classics done up with bold graphics that proclaimed such thoughts as “Dream On” and the more blunt: “No!”

Though garnering mixed reviews, the effort made a salient point: Designers, too, need a little downtime to refuel the creative juices.

With no solution in sight for the short term, this problem isn’t going away. Stay tuned.