While their inspirations may have been very different, certain designers were united in their attention to tailoring and cut. 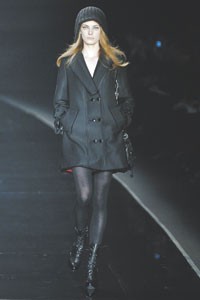 While their inspirations may have been very different, certain designers were united in their attention to tailoring and cut.

Costume National: While Ennio Capasa gave his fall Costume National collection a plenty-pretentious handle — “The Informal Metamorphosis of the Rock Chick” — he kept the clothes interesting without overdoing it. And thankfully, though that rock chick evolved, she didn’t leave her attitude behind. Capasa suited her up in the dark, tailored clothes he loves so well, playing with some of the season’s top trends along the way. A simple mini balloon dress in gray cashmere made for a perfectly refined approach to the silhouette. Palazzo pants in allover pleats worked less well, but Capasa made the monastic point with his full-swinging skirts, paired with a filmy sweater or a weathered leather coat. Best of all, however, were looks that showed off the designer’s razor-fine tailoring: a peacoat edged in fur and a robe trimmed with a slick of jet beading. The rock chick rocks on.

Paco Rabanne: Plugging into the house’s super-spacey legacy, Patrick Robinson sent out an energetic, hard-edged Paco Rabanne collection full of clothes for the future-minded urban warrior. And his timing was just right. Playing on the season’s austerity, Robinson’s opening look, a black coat with sharp pleats running its ribs like sharks’ gills and its grand collar folded down around the shoulders, brought his sleek, dark vision to life. A neat jacket was paired with ribbed knit leggings that stretched down over boots like spats, and a fabulous coat in midnight blue, its belled sleeves lined with fur, had a commanding presence.

There were, however, two sides to the coin. While Robinson’s tailoring was strong, his intergalactic approach fell short with tricked-up dresses that looked overworked and then some, with straps, flaps and more. With his distinctive tailoring, Robinson showed that his Paco Rabanne is gaining momentum, and once he cleans up the rest, the house should be ready — once again — for takeoff.

Andrew Gn: Even as fashion’s collective muse toughens up, Andrew Gn knows that his customer is always a perfect lady, eternally inclined to the finer things in life. His success has been built on the fact that designer and client are on the same page. Gn’s fall show focused almost exclusively on daywear in a discreet palette of black, gray and white. And with day clothes like these, who needs an evening dress? Certainly not the woman who dons his suit with a lush collar of chinchilla, cuffs to match, and elaborate frog buttons done in sparkling jet beads. In that same vein, Gn turned out all manner of ultra-feminine staples touched with his opulent wand. Slim tweed suits, wasp-waisted coats and cashmere knits all got Gn’s Midas touch with panels of antique lace, jeweled buttons that could double as brooches, loads of jet beading and plenty of fur. Conversely, his few fluttery chiffon evening dresses were as plain as could be. Of course, for those occasions, the Gn lady likely needs only a lovely backdrop for her own lavish baubles.

Sophia Kokosalaki: Sophia Kokosalaki is at an interesting crossroads. She has made a name for herself with incredibly intricate pleating techniques, but now it’s time to build a house — and a business. After all, you can’t expect a girl to live by pleats alone. For fall, Kokosalaki tinkered with a tough tailored look, only sending out a handful of her signature pieces. Jackets were cut with dagger-sharp lapels. Ample coats were belted tight. One of the best looks was a mega cozy cape done up in an oversize cableknit.

When Kokosalaki did turn to pleating, she avoided the romanticism of some of her past collections, cutting many of her dresses in hard metallics. Standouts included a black dress that showed off her talent, textured with swirling grooved pleats like a melted record. Clearly, the designer is in experimentation mode. While this wasn’t her best collection to date, she has bravely set out to explore new territory.

Hussein Chalayan: The next time someone says fashion is for airheads, brandish the name of Hussein Chalayan. He makes clothes for a thinking woman — and, frankly, they can leave one scratching one’s head. (Someone should get a PhD in this stuff.) For fall, Chalayan didn’t betray his roots, but he brought a visceral poetry to his thoughtful creations and tempered the invention with some real clothes. Geometry and furniture seemed to be his references, so out swept a coat with geometric details and a puffy leather headrest collar. A more wearable interpretation of the theme had a two-piece collar that gaped open with leather inside. Coats cut in a circle, including a puffy duffle version, preceded dresses with a decorative Art Nouveau cutout in front, while there were plenty of approachable knit variations on the designer’s geometric theme. Chalayan has worked the furniture theme in the past, and it showed up in a pillow-like velvet coat (replete with upholstery studs) and a metallic-rivet dress with puffy chair-like velvet on the hips. How’s that’s for comfy?