The Duke and Duchess of Sussex flew in the face of tradition and refused to reveal the names of the godparents, leaving royal watchers fuming.

LONDON — The Duke and Duchess of Sussex kept the British public — and royal watchers around the world — guessing about the names of their second son’s godparents. Defying royal tradition, the couple refused to name the godparents of Archie Harrison Mountbatten-Windsor, who was christened Saturday morning at Queen Elizabeth II’s private chapel at Windsor Castle in an under-the-radar ceremony.

Later in the day, the Sussexes released two pictures, a black-and-white image of themselves holding Archie, and an official color portrait with immediate family, including the Duke and Duchess of Cambridge, Prince Charles, the Duchess of Cornwall and Doria Ragland, Meghan Markle’s mother. The images were photographed by Chris Allerton.

The British media slammed the couple for withholding details of the big event and accused Harry of acting like an A-list celebrity rather than a royal. Newspapers also wanted to know why he and Meghan were happy to take 2.4 million pounds in public money to renovate their home on the Queen’s Windsor estate, while refusing to play the game and divulge details of – or let media into – the christening. After all, William and Kate let the press photograph all three of their children’s christenings, and were open about the names of the godparents.

Penny Junor, royal author and biographer of Prince Harry, was livid, writing in The Sunday Times of London that being so secretive – and hypocritical – was a bad move that could backfire on the couple. “Privilege comes with responsibilities and a few obligations. Whether (Prince Harry) likes it or not, his two-month old son is seventh in line to the throne. Archie was christened by the Archbishop of Canterbury. That makes the baby special from the start.”

Junor said that Harry’s attempts to bypass the media (which he has repeatedly tried to do since before his engagement) and to rely on social media instead “are the actions of a superstar, not someone who has embraced a life of duty – as working members of the royal family have for generations.”

Writing a separate column in The Sunday Times, Camilla Long called Harry “HRH Killjoy” and dubbed the christening “a PR disaster.” Long wrote: “Harry wants a ‘normal’ life for Archie. He hates the press and the paparazzi. Everywhere Harry looks, he sees people who want to take advantage of him, which isn’t true and leads to this sad irascibility in which he forgets what’s kind and decent – and who’s paying the bill. What has become of him? If you scan Meghan and Harry’s Instagram feed you will see how distant the ‘people’s prince’ has turned out.”

The Mail Online was similarly critical, pointing out that many royal fans were “let down” by not being able to witness the comings and goings of guests and godparents on Saturday, while Telegraph journalist Judith Woods wrote an open letter to Meghan called “Why the secrecy over Archie’s christening? It hurts us, the British People.”

The private nature of the event didn’t stop the Duchess of Sussex from splashing out on a new outfit for the big day. Meghan wore a cream Dior Couture dress with matching hat, and Cartier earrings, while the Duchess of Cambridge was in a coral Stella McCartney dress with a pussy bow and pleats at the front. 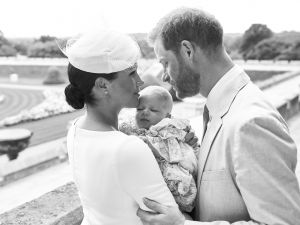 The Duke and Duchess of Sussex holding their son Archie Harrison Mountbatten-Windsor at Windsor Castle with the Rose Garden in the background.  CHRIS ALLERTON/Courtesy

Also in the official photo are the late Princess Diana’s sisters Lady Jane Fellowes and Lady Sarah McCorquodale. The Queen and the Duke of Edinburgh were not in attendance due to a previous engagement.

The royal couple said in an Instagram post later in the day that the baby was christened in the Private Chapel at Windsor Castle at an intimate service, officiated by the Archbishop of Canterbury, Justin Welby.

“Their Royal Highnesses feel fortunate to have enjoyed this day with family and the godparents of Archie,” the post said. Oprah Winfrey, Jessica Mulroney, Serena Williams and George and Amal Clooney have all been mooted as potential godparents.

Prince Harry in particular has been adamant that his son remain a private citizen, one reason why he and his wife chose not to give Archie a title. That said, the newest royal enjoyed similar perks to his cousins, wearing a replica of the Honiton lace christening gown commissioned by Queen Victoria for the baptism of her first child, Princess Victoria, in 1841.