The Soul Men of Seoul 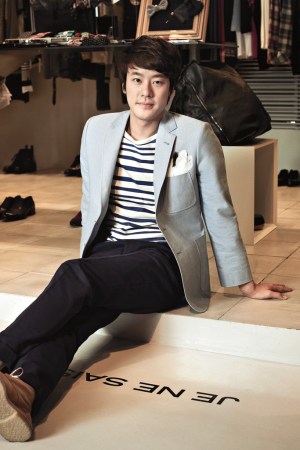 A fixture of the Seoul scene, Jay Kim recently returned after years in the U.S. He studied biochemistry in Boston and made jaunts to New York to model for Korean mags and TV ads, sometimes playing the beau of Korean starlets. Post-school, he took a job at the Dana-Farber Cancer Institute.

“My parents really wanted me to come back,” he says. He found work at Samsung, prepping music videos for mobile units.

Kim still models and appears in music videos, but as a hobby. “I’m doing it for fun,” he says.

WHERE TO RELAX: Mt. Nam

Kim likes a brisk run up the mountain, then a workout at the nearby Grand Hyatt’s great gym.

This interzone of clubs and restaurants is the nighttime playground of expats and rich, hip Seoulites.

WHERE TO BRING A DATE: Jaebu island

“My ex-girlfriends are all celebrities, so I can’t really date in the city,” he says. Kim likes the isle’s small-town feel and fresh air.

DJ Lee has had a love of vinyl since high school. Now 27, he’s DJ’d for a decade. At 20, he co-created 360 Sounds, a crew that makes music and is plugged into the club culture.

Lee’s new CD of electronica, Lucid Dreams, comes with a book of “moody” urban pix from his travels across Asia.

Maison Martin Margiela, Visvim and Our Legacy are his fave labels. “I’m a DJ, so I want to mix and match,” he says.

When he DJs, Lee often wears a sweatshirt. Or no shirt.

Lee says Korea’s scene and style are less sophisticated than elsewhere, a work in progress. “We are finding our own way.”

This semi-hidden gem stocks a big mix of labels from Heritage Floss to Berg & Berg.

This eatery serves hearty fare from America’s Deep South: “The meat loaf is the best.”

PREFERRED HANGOUT: Camping and surfing in the East or South.

WHERE TO BRING A DATE: Rufxxx

This venue hosts a mix of acts, from traditional Korean music to interpretative dance.

After Kimoon Kim graduated from the Samsung Art and Design Institute in 2010, he and a couple of friends started a firm called mykc that designs books, art catalogues and logos.

“I’m not a hip person,” says the quiet creative, who calls his style basic. “I just like black or gray. And one [accent] color,” he adds, gesturing to a block of red on his sweater and matching striped socks. American Apparel is one of his favorite labels.

“Seoul has two faces,” he says. The city evolves, but “some things never change.”

The ground level of this complex has a cool café and the flagship of MMMG—a trendy stationery and accessories emporium. Freitag’s bright, sturdy bags are on two. Post Poetics, an artsy bookstore, is one flight up.

WHERE TO RELAX: Banpo apartment complex

“I lived there when I was young,” says Kim of this Seventies-era district. “There’s a public garden in front,” he says, “but people [make their own gardens inside].” He likes the way it blurs public and private space.

This neighborhood is filled with small printing plants and alleys. Kim admits it’s not beautiful—it’s both dirty and noisy—but it’s atmospheric.

WHERE TO BRING A DATE: Han River

This waterway bisects Seoul and is lined with verdant spaces to relax. It’s crisscrossed with bridges that are lit up at night.

Taemin Han spent almost nine years in Italy, studying fashion at Polimida in Florence, then working as a designer and consultant under Romano Ridolfi. Inspired to start his own men’s wear boutique, Han opened San Francisco Market in Seoul in 2005.

Both Han and his boutique are “not so Italian, not so American,” as he puts it. He likes to temper sharp Italian suits with sturdy American shoes and a Mad Men hairstyle.

Han marvels at how the style of Korean guys has evolved since he opened. Back then, many men wore ill-fitting pants and branded T-shirts. Han helped introduce them to tailored trousers and lamb’s wool sweaters.

“The first two years were really tough for our business because almost nobody understood what we were doing,” he says. Viva la evolution!

WHERE TO RELAX: Han River

“Every morning I walk there for two-and-a-half hours before going to work.”

WHERE TO BRING A DATE: House of the Purple

Open only to Hyundai Purple Card holders (and guests), this private retreat has a vintage sound system, a great cocktail bar, a library, board games and a landscaped private terrace.