The Spirit of Invention

Since its inception in 1998, the edge at MAGIC has been a stomping ground for alternative looks and thus has drawn together the usually new and small companies that are behind them. Show organizers said this year, more than ever before, they want to... 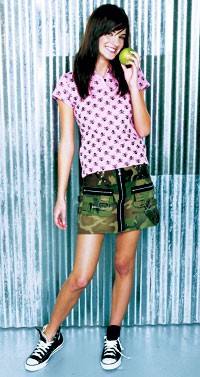 Since its inception in 1998, the edge at MAGIC has been a stomping ground for alternative looks and thus has drawn together the usually new and small companies that are behind them. Show organizers said this year, more than ever before, they want to play up the launching pad atmosphere of the show.

In fact, features like the rack-and-table concept make it more desirable than ever to premiere at WWDMAGIC. This exhibit space within the edge was created to give small companies that have never exhibited a more economical entry into the trade fair arena.

But whether collections are just starting out or returning for an encore, many are facing the same concerns. Although the demand for unique product has kept sales brisk for vendors in this category, continually creating standout goods has remained a challenge, especially in the T-shirt business, which drives the majority of sales at the edge.

Another worry is meeting production schedules, which can stymie young companies in their early days.

Competition also remains strong as the allure of cashing in on the latest craze attracts newcomers.

The edge is no stranger to T-shirt collections, but this season, Ts are having to get a bit smarter. Gone are the days when a logo slapped across the front made for a continual bestseller.

Jeff Nicholas, partner and designer of the Los Angeles-based T-shirt company Visionary Period, is hoping to achieve longevity in the market by offering one-of-a-kind creations.

“We’re coming to the table with something that I don’t think many people are doing,” he said.

Nicholas and his partner, Darren Craig, are graphic designers by trade and create graffiti-inspired art featuring city landscapes and interlocking puzzle pieces for Visionary’s Ts and thermals. The wholesale price range of the collection is between $15 and $45.

“Since we’re graphic designers, we’re not thinking about what the market wants. I don’t think many people are creating art-driven work in this market. Each shirt that we create at Visionary Period is literally a work of art,” Nicholas said.

“We take a lot of time and make a lot of considerations,” said Lee Kimble, co-owner and illustrator for the brand. His partner, Maurizio Villarreal, does the graphic design in Alabama.

The Cero collection includes Ts featuring designs grouped into categories, such as toys and games, ice cream and city playgrounds. Prices range from $11 to $14.

Maestro, a T-shirt company based in North Carolina, learned through focus groups that the market was ready for something a little more creative than just logo looks.

In response, Maestro applies music-related designs, such as stenciled Frank Sinatra and Ray Charles images, on its Ts.

“I can guarantee there’s nothing out there like what we’re doing,” said Alicia Sanders, president.

“And our numbers, as far as sales are concerned, are really good,” she added. Sanders said she predicts gross sales to exceed $1 million in 2005.

For a number of the small businesses visiting the edge, keeping up with increasing production demands is a Catch-22.

Visionary Period bases its business around handprinting, which is difficult to maintain once orders really begin rolling in. “I think one of the biggest hurdles, until you get to a certain point, has to do with production and meeting the quantities,” said Nicholas.

Kimble of Cero agreed. “Production is always an issue,” he said. Cero’s collection is currently printed in Tennessee, but since Cero is based in New York, Kimble is exploring production options in Brooklyn.

“Fortunately, I think we’ll be OK in that department,” Kimble said with a laugh. “Even though this is our first year, we’re expecting it to run perfectly.”

THE TIME IS NOW

Despite the challenges posed by breaking into this market, many companies, even those with no prior experience in the fashion industry, are enticed by the potential profits of a hot trend.

Recently, tattoo culture, for example, has evolved into a mainstream craze, and companies are responding.

For more than 10 years, Pulse Inc. has been doing custom design work for theme parks such as Universal and theme restaurants like Planet Hollywood and Hard Rock Cafe.

Barry Vilkin, president of Pulse, said it was an “ideas company.”

“We made calendars, playing cards, cookie jars and neon lights for these companies,” Vilkin said. But it was one idea in particular that helped Vilkin to launch a new company.

“We made temporary tattoos for the Hard Rock Cafe as a promotional product,” he said. “Everyone loved it and I knew we were on to something.”

He then launched Tattoo Couture, a collection of eight tank tops, wholesale priced at $25, that include tattoo-inspired designs such as hearts, daggers and sparrows.

“Right now, you see all this tattoo-inspired work everywhere. So many actresses and women of all ages have tattoos,” said Melissa Vilkin, Barry’s wife and the company’s sales manager. “We’re hoping that the money and time we’ve invested pays off.”

In terms of the tough competition Tattoo Couture has to go up against, both the Vilkins believe they have what it takes.

For example, Tattoo Couture opted to machine-stitch the designs on the Ts and tanks rather than screen-print them as do most other T-shirt brands.

Also, the Vilkins have been in business for more than 10 years, so they’re experienced with sourcing the products. “It’s another step that we’re familiar with — this one just has to do with clothing,” said Melissa.

If the launch goes well, the Vilkins hope to expand the collection to include denim and a full range of tops.