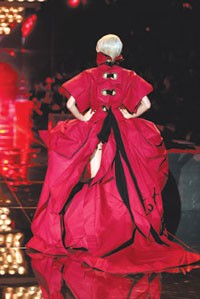 Is there a couture crisis? The answer might depend upon how you feel about that proverbial tree crashing in the forest. If nobody cares, can it be considered a crisis? Whatever one’s perspective, even the most die-hard aficionado of haute must admit that the milieu’s long-festering identity crisis and recent rapid attrition have taken their toll. And when one factors in the financial angle — especially when it seems that all we hear these days, not only from retailers but designers as well, is about the glories of those ready-to-wear pre-collections — couture seems like an institution in more of a quagmire than ever. Monday’s early shows did little to clarify the genre.

Not surprisingly, Giorgio Armani at Armani Privé and John Galliano at Christian Dior took wildly different approaches — Armani’s reverential at times to a fault, but focused keenly on his perception of real-world glamour; Galliano’s all theatricality complete with libertine leanings and faux blood by the bucket, but not a trace of red-carpet reality or allure. Each in its own way felt somewhat forced.

Ziyi Zhang was unquestionably one of the most dazzling young stars at last week’s Golden Globes, looking drop-dead gorgeous in a graceful flush of chartreuse silk from Armani Privé. At the Privé presentation on Monday, word was that selections for upcoming events were being made for Michelle Pfeiffer, Hilary Swank and Chanel ex-pat Reese Witherspoon. Those ladies could well take a lesson from Zhang, because the goods are there, but boy, does a girl have to make them her own. As presented, the Privé collection ranged from siren to stuffy, styled with an intensity that sucks all the fun out of dressing up.

Armani obviously holds strident ideas about couture, believing first and foremost in an haute experience that is dramatic and ultraserious. He paraded his hyperconstructionist premise first in pantsuits, their core chic sometimes jousting for attention with improbable details. Evening came dripping in crystals and organza extensions. Here, a handful of pantsuits flashed Liza-with-a-z while diversifying Armani’s true passion of the moment, the siren gown. These steamed up the premises in a wealth of variations — pale orange ribbon banding; abstract-printed silks; a devastatingly glamorous plunging-neck number with beaded skirt, and at the more bizarre end of the scope, a pair of frocks with 360-degree lanterns encircling the hips (definitely not sitting dresses). Yet the collection’s most intriguing dress was also its most potentially amusing, all curves and completely encrusted in near-blinding multicolored crystals. It’s the kind of dress that requires stratospheric star power and confidence (not to mention a young hairstyle) to pull off. And then — watch out.

“Watch out” might also have been the rallying cry at Galliano’s Dior, but for a very different reason. What else do you yell when a young lovely is about to lose her head? On the up side, Galliano got the jump on the legions of fashion Antoinette-o-philes who will no doubt be swarming about as the release date of Sofia Coppola’s film nears. His love of fashion and reverence for couture craft were in full flower in the high-drama cuts, endless reinvented corsetry and evocative, decorative flourishes, now rich with elaborate printing and pictures, including portraits of the young queen herself. On the downside, he ignored completely the joyful passion for fashion she indulged so recklessly before the courtly life soured. (What a show it might have been had Galliano told her entire story his way.) Rather, he focused on ghostly jailed maids, revolutionaries and executioner types, with a few skeletal digressions. And for all its intricacies, at times the costumery felt too familiar, impeccably crafted, highly complicated concoctions of the sort perfected by Galliano over the years. Along with such visual histrionics one longed for dreams of the calmer sort, if not for everyday life, then at least an idea or two to put out there for awards season. Then again, you never know. Witherspoon just might want to wear a face-covering “blood”-splattered leather jacket over a graffitied see-through skirt. At least she’d be sure to be the first.