Karl Lagerfeld is all worked up as he holds court in a room at the Mercer Hotel on Tuesday afternoon, his entourage having taken over the entire sixth floor for fittings, styling, hair and makeup trials, look-book photos and the like. 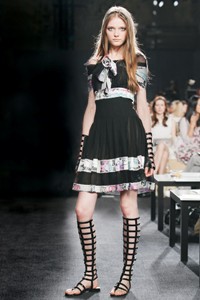 NEW YORK — Karl Lagerfeld is all worked up as he holds court in a room at the Mercer Hotel on Tuesday afternoon, his entourage having taken over the entire sixth floor for fittings, styling, hair and makeup trials, look-book photos and the like. It’s the day before the designer will present his cruise collection in one of New York’s most spectacular, and most public, buildings, Grand Central Terminal, but his ire has nothing to do with pre-show anxiety. Rather, Lagerfeld is appalled by the cover story in Sunday’s New York Times Magazine about the future of the printed book. “You will never love print on the computer the way you love print on paper,” he declares, the grandeur of regal proclamation in his delivery. “Then there’s the idea that [online] you can read the ideas of other people on the book. I don’t care about other people’s comments on the book. It’s all grotesque, no?”

Grave though that issue may be, it cannot consume all of Lagerfeld’s conversation, not when he’s got the artwork from his latest editorial feature — drawn portraits of the German soccer team, to be published in a magazine, the name of which escapes him at the moment — to pass around; accolades on last week’s mind-boggling $6.1 million trunk show at Bergdorf Goodman to accept; commentary on recent magazine features to deliver, and good words to direct toward Alain Wertheimer and Bernard Arnault. The one-liners about it all spew forth, until a model emerges from the back room dressed in jeans, a ruffled denim shirt and two colorful cardigans, one over the other. After a quick look, Lagerfeld interrupts his own conversation. “This is a gay twinset,” he says. Huh? “A gay twinset — not a cardigan and pullover, but two of the same kind.”

That twinset is destined for the quasi-public yet exclusive show on the Grand Central’s East Balcony that will reel in the likes of Naomi Watts, Julianne Moore, Mischa Barton and Maria Bello. The location appealed to Lagerfeld for a number of reasons: He has always cottoned to photos of the place, and he finds the travel association amusing. “I said it like a joke — I would like to make the cruise show there because it’s about trains, leaving and coming back,” he says. “We did not know it was possible, but then the girl Sophie who takes care of all that and is very, very, very good — she organized it.” And particular edifice aside, right now, Lagerfeld, like Dior’s John Galliano, who presented his cruise collection here on Tuesday night, is very much in a New York state of mind. “It’s, in a way, the world capital,” Lagerfeld says.” I must say I like it, all the people I work with coming to New York to see what’s going on, the energy in the streets we don’t have in Paris.”

This story first appeared in the May 18, 2006 issue of WWD. Subscribe Today.

This afternoon, endless energy pulses within his Mercer enclave, models coming and going, various New York and Paris Chanelites tending to their tasks, all feeding on the productive chaos and visual overload as every last speck of counter space is strewn with books, a press kit tower and trays of accessories — including adorable chain-link train belts in honor of the locale. “A little childish, but good, no?” Lagerfeld muses.

He proclaims the collection easy, an assessment Wednesday’s show will support. There’s a devilish snap to the most casual looks, and jeans-loving girls who prefer Goth to gay can forgo those two-of-a-kind cardigans in favor of more traditional twinsets in black lace. Of course, denim hardly accounted for most of Bergdorf’s six million big ones, so there’s plenty more: bold, geometric tweeds suits; no-nonsense jackets and dresses tied with skinny strings pulled through grommets; shapely, black-belted suits; bright white waffled knits. And countering the sportif, he showed a bounty of young, fluid dresses, some in whimsical logo prints. It’s a collection rich with diversity and razor sharp in its distinctive Chanel chic.

Like Galliano, Lagerfeld says he might book a return engagement for next year’s cruise presentation. But he also ponders an even bigger departure from Paris: for once, at least, taking haute couture to New York. “Why not?” he asks. “Let’s be honest, you look at the list of who buys couture — it’s more Americans than anything else. So be polite.”

Polite to whom? Lagerfeld sounds semi-serious, but knows that such a move would deliver French fashion its biggest mon dieu since Saint Laurent got his draft card. “The French — they hate me because I’m the mean stranger who tries to bring French fashion all over the world,” he says. “They think that everybody wouldn’t come for a season, but it would be good for French fashion.” To wit, one can only imagine the multitiered press frenzy that would ensue. But mighty though he is, Lagerfeld admits that he and Chanel can’t go it alone. “Then,” he says, “I need Dior to agree with me.”