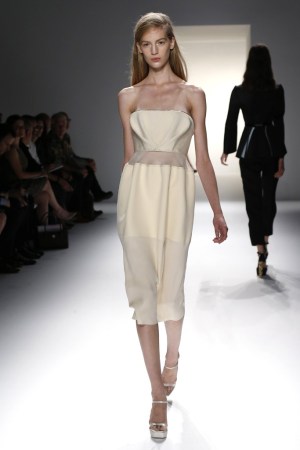 There’s no denying the fact that when it comes to brand awareness, American consumers like to keep things close to home.

In this year’s top-10 list of most-recognized designer brands, Calvin Klein, Tommy Hilfiger and Ralph Lauren take the three top spots—and for good reason. Each of these brands stands for a particular genre of Americana that U.S. consumers react to emotionally, and likely identify with.

Calvin Klein, for instance, is a homegrown megabrand with an offering that spans three retail tiers (designer, bridge and better) and a variety of categories. Even if its namesake founder has long left the company, the brand—under PVH Corp.’s strong management, and with design talent like Francisco Costa, Kevin Carrigan and Italo Zucchelli—continues to provide a sleek and sexy version of American cool. Tommy Hilfiger’s take on preppy-with-a-twist offers a novel vision of East Coast dress codes, and Ralph Lauren, like no other U.S. designer, embodies quintessential luxury rendered through an American lens and peppered with an Anglophile sensibility.

Brand proclivities aside, these three brands are also masters at conveying their messages to consumers. Each embraces innovative, on-pulse ways to heighten brand awareness. Case in point, Calvin Klein, which continues to turn heads with ads that are sexy, sensual, sometimes provocative and almost always innovative. Working with model Lara Stone, the fall campaign for Calvin Klein Underwear, for instance, was digitally focused and launched on YouTube in the summer. The brand is not just pioneering the online world. In May, Calvin Klein Inc. also formed a strategic marketing alliance with Barclays Center, Brooklyn’s new sports and entertainment venue, and the Brooklyn Nets, which includes Calvin Klein branding on courtside seats, TV-visible courtside and baseline signage, branded backdrops during marquee events and a major advertising presence. The venue will feature a Calvin Klein Courtside Club and a Calvin Klein VIP Entrance on Atlantic Avenue in Brooklyn. It won’t just keep the brand name front and center at this important venue, but with so many sports fans on hand year-round, it is sure to also help sales of the Calvin Klein Performance line.

Sports are a key marketing tool elsewhere, as well. In May, Tommy Hilfiger signed a sponsorship deal with the Golf Club at Chelsea Piers in New York. The partnership secures prime advertising placement for the spring 2013 golf campaign, featuring Keegan Bradley, Hilfiger’s golf ambassador and 2011 PGA Championship winner. Ads will run from the West Side Highway to the tip of the 200-yard fairway, including entrance signage, parking-garage banners, T-divider patches, tower banners, point-of-sale graphics and elevator door wraps. That—and The Hilfigers campaign, which has a heavy rotation during the holiday period, in particular—should keep the brand in front of consumers.

For anyone who watched the past Summer Olympics in London, it was hard to escape Ralph Lauren’s stamp. The designer created the looks for the U.S. Olympic and Paralympic teams, from the opening to closing ceremonies to casual village wear. While the company found itself at the center of a tempest after it was revealed that the uniforms were made in China, it nonetheless garnered much media attention—and Lauren was able to turn that to his favor when he vowed to manufacture the uniforms in the U.S. for the 2014 Olympics. The designer also has a visible presence in tennis, creating the uniforms for both Wimbledon and the U.S. Open.

Gucci, in fourth position, knows a hot commodity when it sees one. The Italian fashion company secured Charlotte Casiraghi, the beautiful yet press-shy daughter of Princess Caroline of Monaco and high-profile member of the international jet set, as an ambassador for Gucci’s equestrian roots, and the face of its Forever Now advertising. She’s not the only of-the-moment face the brand is capitalizing on. In September, Gucci creative director Frida Giannini dressed singer and fashion plate Florence Welch for Florence + the Machine’s Ceremonials three-month U.S. and European tour.

Coming in at number five, Vera Wang has seen its reach grow significantly in the past year. Besides her high-profile bridal and ready-to-wear collections, Wang has a significant presence at Kohl’s with Simply Vera Vera Wang and the Princess Vera Wang junior collection. She also offers more affordably priced bridal gowns through a deal with David’s Bridal, and the Vera Wang Love collection of wedding bands at Zales.

DKNY, also in expansion mode, in the past year alone added 48 new full-price stores and brought the bridge and better sportswear brand to Russia, Vietnam, Indonesia, Abu Dhabi and Qatar. DKNY is also highly active in the social-media world. Its Twitter personality DKNY PR GIRL is among the most popular in fashion and, at press time, had more than 420,000 followers.

The rest of the designer-specific survey belongs to the Europeans: French houses Louis Vuitton and Chanel come in at seven and eight, respectively, while Italian designer brands Dolce & Gabbana and Giorgio Armani are in positions nine and 10. Each of these four come with profound luxury histories—and significant advertising and marketing budgets to boot. At Louis Vuitton, Marc Jacobs continues to collect critical acclaim with innovative runway shows that, if nothing else, further boost sales of the house’s leather goods, and collaborations like the one with Japanese artist Yayoi Kusama last summer. Ditto Chanel, where there’s no stopping Karl Lagerfeld. When he staged the spring runway show for Chanel amid an installation of giant wind turbines and solar panels, he let the world know that the brand’s source of power comes quite naturally.

Dolce & Gabbana recently made news for folding its popular diffusion line D&G into the signature brand, allowing it to grow. And during the last round of Milan runway shows in September, Giorgio Armani unveiled an exhibition of his clothes called “Eccentrico.” The striking lineup included a couple of numbers worn by Lady Gaga—now there’s a way to garner instant brand awareness.