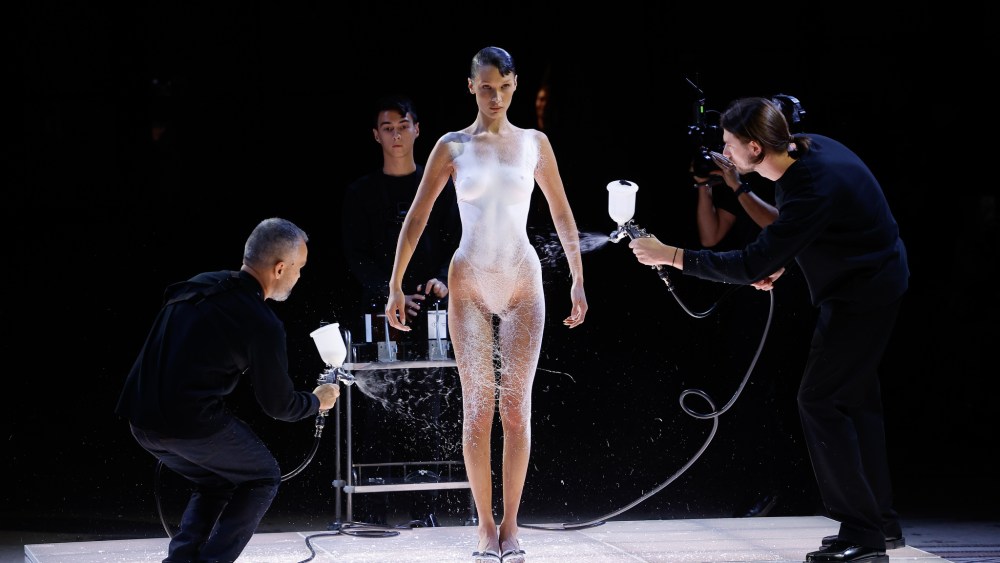 Serena! Cher! Bella Hadid having a dress spray-painted onto her naked body!

The spring 2023 runway shows and presentations took the fashion pack from a rainy drive-in theater in Brooklyn to a London in royal mourning and on to lots of twins in Milan before wrapping up in Paris with the Eiffel Tower at Saint Laurent and Christian Louboutin and Kanye West’s controversial Yeezy show.

It was indeed a wild season, but also a supercharged one, with so many dazzling shows — and clothes — in every city, it was hard to choose favorites.

Ahead of their spring 2023 runway show, Coperni designers and married couple Arnaud Vaillant and Sébastien Meyer told WWD, “It’s an homage to women in general, and the evolution of the morphology and the body through centuries.”

“Technology and fashion have always been uneasy bedfellows, but if anyone can make science sexy, then it’s Coperni designers, who partnered with Manel Torres, the inventor of the Spray-on fabric, for the performance,” WWD’s Joelle Diderich wrote of the brand’s show-closing performance featuring a nearly naked Bella Hadid in “the world’s first live-action spray-on dress.”

“Beyond the wow factor of watching Hadid walk down the runway in her instant dress, the show raised all kinds of fascinating questions about how technology will change the way we clothe ourselves not only in the virtual world, but IRL,” Diderich added.

“Fendi is one of a number of European brands energizing New York Fashion Week this season, staging a full-scale runway show and clothing collection inside a packed Hammerstein Ballroom on Friday night in celebration of the 25th anniversary of the iconic Baguette bag, introduced in 1997,” wrote WWD’s Booth Moore of Fendi’s spectacular New York City runway show.

“Richard Quinn closed fashion week — with two shows in one. The first was dedicated to Queen Elizabeth II, and the second was the spectacle he had originally planned months before her death,” wrote WWD’s Hikmat Mohammed.

“We wanted it to be appropriate for the time, and it’s really historic,” Quinn told WWD, who also credited the queen for the brand’s success since made a rare — if unparalleled — fashion week visit in 2018 to present him with the Award for British Design. “It’s how everyone first knew us, and it will always be a part of our journey and history.”

The designer honored the queen with an extra 22 show-opening looks, which were said to take him and his studio 10 days to create — stitching through the night and while watching the late monarch’s funeral — and shifting his show to the evening following the funeral. The second part of the show featured 26 looks inspired by space and sci-fi — ending with a white bridal lace number.

“Certainly there is a bit of a fashion outlaw in Holstein. But her collections don’t really have themes. Rather, they are about the perfect piece on the coolest woman in the room,” Moore wrote of the collection’s femme fatale lineup of perfect-fit ready-to-wear and accessories. “From age 20 to 80, there was something for everyone.”

“Bloom therapy. That’s what Dries Van Noten’s spring 2023 collection felt like as it unfolded from an all-black beginning, to a softer middle, then exploded into a beautiful riot of florals that was a master class in mixing prints,” wrote Moore.

“I thought maybe we have to start from black, really the essence, the base of what fashion and clothes are — pleating, volume, structures, then to introduce the same volumes going from stiff and hard to softer, fluid versions. The shapes in fact stayed the same, so it’s the same lexicon,” the designer told WWD during a preview, adding the storyline, or rather three storylines, could be a metaphor for our times. “On the one hand you want protection but on the other hand you want to show your softer side.”

“A lamentation for the sorrow in the world today. And a feeling of wanting to stand together” were the two phrases Japanese maverick Rei Kawakubo released to explain the collection, her first shown on a Paris runway since the onset of the coronavirus pandemic.

“Kawakubo’s parade of colossal hooded shapes took your mind to “The Handsmaid’s Tale,” of course, and all its sinister implications. In profile, they sometimes resembled the horn-shaped vents on old cruise ships, which made you think about the migrant crisis, too,” reported WWD’s Miles Socha.

Socha labeled the collection “ingenuity on steroids,” with “every exit revealed a never-seen-before shape; sometimes strange, often beautiful, all executed in beautiful brocades, rich lace and other dressy and ceremonial fabrics.”

“I’m a boy who had two moms, because when I was born, the first seven years of life my mom had an identical twin. So I usually called them mom and mom,” Alessandro Michele said in an interview, speaking of his late mother Eralda and late aunt Giuliana. “It was so beautiful my life with a double love,” he mused to WWD’s Moore of his “Twinsburg” spring 2023 Gucci collection that started with a straight runway show, before a center divider lifted to reveal the same one happening on the other side.

“So I grew up with the idea of the other one who is exactly like you but not you. It’s about humanity. It’s interesting that twins are the concrete vision of the other. It’s very attractive because it’s exactly like you. I did experience this from the outside in a deep way, constantly living with these two women who look the same, dress the same way, had the same hair, the same parfum, and it’s beautiful how in the bad moment they cared about each other. It’s very paradigmatic of our lives.…Especially now we need to care about the other that’s physically another person, but also the other you.”

“It was a gorgeous, and deeply introspective, moment for Michele,” Moore said of the 68 pairs of model look-alikes — all of them actual real-life twins — that came together from opposite sides on the runway, joining hands for a final walk, making a poignant visual statement.

“Anderson settled on a few key silhouettes, and both were sensational,” Socha said of Jonathan Anderson’s’ spring Loewe show, which featured tight polo shirts that flared out into brief baby-doll dresses; minidresses with compact panniers, one of the more offbeat trends this season, and shrunken hunting jackets and shearling bombers, either snug or trapeze in shape.

“Most exits consisted of nothing more than a dress and a pair of quirky statement shoes, which have become a Loewe stronghold and one of the most expressive categories in fashion today.”

“I’m saying there are different aesthetic options,” Owens explained backstage to WWD’s Socha, amid eco-tulle skirts so vast they stood on their own. “It’s a protest against conventional judgment. And this is what I have dedicated my life to.”

“His spooky stalactite shoulders were back in a big way, on everything from snug bomber jackets to Barbie pink cocktail dresses,” Socha said. “So were his crumpled volumes, here in gleaming metallic fabrics, looking like car parts crushed elegantly around the body. These continue to challenge the eye, and Owens isn’t relenting.”

“Newer and completely seductive were his languid and revealing gowns with long trains; his giant tulle skirts, and his swishy chiffon trapeze tops, constructed with endless godets,” Socha said.

“While some luxury brands roll out collections and collaborations every five minutes, we haven’t heard much from Blazy’s Bottega since his debut last February. And no wonder: It takes time, and a village of skilled artisans, to conceive and create a collection this good,” WWD’s Socha said of the spring collection.

Backstage, designer Matthieu Blazy was almost apologetic trying to explain how his own jeans, also all leather, had no stitching, and how the fringe on the finale dresses were integrated into the fabric, and then trimmed by hand, Socha reported. “It’s very technical. The project is not easy,” Blazy said to Socha. “Craft — the things we can do at Bottega that no other brand can — this is our identity.