Pat Kerr was cool and collected two hours and 15 minutes before the bridal designer's 25th anniversary fashion show and retrospective. 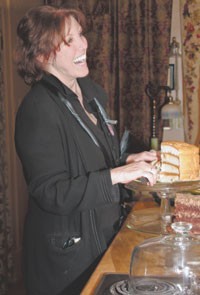 MEMPHIS — Pat Kerr was cool and collected. It was two hours and 15 minutes before the bridal designer’s 25th anniversary fashion show and retrospective at the newly refurbished Cannon Center here, and after a preview and backstage tour of the 1,000-plus capacity venue, Kerr hopped into her black 745 LI BMW, and gave a tour of the Southern city she calls home. When she arrived at the barriers blocking off vehicle access to Mud Island, one of the city’s newest public-space projects, Kerr, who’s considered by many to be the honorary mayor of Memphis, merely flashed a wave and passed through.

The designer said she was dedicating the show that evening to her mother, Margaret, who wasn’t well enough to attend in person. Pat calls her mother an “extraordinarily visionary woman,” saying “she inspired me, encouraged me and nurtured every possible creative thought that I had.”

Pat’s father was a farmer, and Margaret was a stay-at-home mom who furnished her daughter with yards and yards of fabric for her playful disposal. From her, the designer learned to appreciate fine things at an early age. Now she has an enormous collection of antique laces and textiles, including more than 100 pieces from the Duke and Duchess of Windsor’s private collection and four of Princess Diana’s gowns, which Kerr acquired from the Christie’s auction in New York in 1997.

“I don’t design for anything that people need,” Kerr reflected. “I create pieces for the ceremonies of life…and I enjoy the comfort and confidence that I use the most beautiful fabrics and laces in the world.”

Kerr sources her fabrics from all over the globe, and has standing orders with auction houses such as Christie’s and Sotheby’s to acquire pieces from estate sales.

Her customers have included Jennifer Lopez, Tipper Gore and Sophia Loren. Kerr designed a short black silk taffeta gown with puff sleeves and tulle details, which the Italian actress wore to the White House. Gore chose a black handmade lace number with a deep V-neck for an inaugural event in 1992.

Although the designer’s bridal gowns can sell for more than $50,000, her business is still a small operation, and Kerr currently only sells made-to-order pieces. She also heads an events company called Celebrations and organizes some of Memphis’ biggest parties, from private weddings to the city’s Blues Ball (America’s largest annual ball) to lighting the Hernando de Soto bridge, which crosses the Mississippi River at its widest point, with 200 sodium vapor lights.

Tickets to the live runway show and preshow cocktail reception ran from $35 to $100. The event benefited The Pat Kerr Scholar in Fashion grant at the University of Memphis, along with Dress for Success; Hope House, a local Memphis pediatric AIDS facility; the Memphis Ballet, and the American Heart Association. Kerr and the Salvation Army collected additional funds for Hurricane Katrina victims, and enlisted local sponsors such as Gibson Musical Instruments, FedEx Kinko’s and Graceland to help underwrite the event.

By 6:30 that evening, thousands of red roses lined the reception foyer either loose, in bouquets or dangling from red satin streamers suspended from the ceiling, as guests toasted with drinks they received from a 20-foot-long bar made entirely of ice. Complete with fog machines, pyrotechnics and a soulful opening of the National Anthem, the Cannon Center stage was transformed into a runway venue. About 1,000 guests watched as models walked to music from Bach to Puccini, hip-hop and blues to rock ’n’ roll. Kerr showed 155 looks, some from her archives, some new — including a group of sexy, form-fitting black lace and tulle evening pieces that looked particularly fresh. Silhouettes ranged from slim sheaths to full ballgowns with lavish trains and tulle petticoats. Almost all featured her handmade antique laces, either elegantly draped as a veil or train, or cut into skirts, bodices and jackets.

After the show, VIP guests and sponsors, local press and celebrities including Isaac Hayes, Sam the Sham (of the Pharos) and Samuel L. Jackson (who made a brief cameo and was in town shooting his new film, “Black Snake Moan”), took limos to the after-party at the Beale Street Gibson Guitar Factory. Guests dined on raw seafood, a Southern version of macaroni and cheese with lobster and buffalo in a brown cream sauce, and danced to the live music of the queen of Beale Street, Ruby Wilson.

A handful of brave souls, mostly the New York crowd, then followed the designer; her son, Kerr Tigrett, and a security entourage for after-hour festivities. The first stop was the VIP room of Raiford’s, a quirky, time-warped Sixties disco, turned into a black-tie danceteria, complete with a stripper pole. “Like a Prayer” and “Billie Jean” and Budweiser 40-oz. beers — the only beverage offered — supplied the additional entertainment.

But it wasn’t over yet. Kerr then carried the party to Earnstein & Hazel’s, a former brothel with “guest rooms” still intact, for some late-night soul burgers.