As the fashion calendar grows, so does the list of unfamiliar names taking to the runways. Here’s a handy guide. 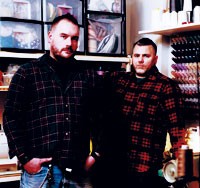 PERSIA
Pedigree: Persia Tatar, 24, zipped through Villanova University in three years, and, after graduation, promptly took a job as a business analyst with the accounting firm PriceWaterhouseCoopers. That’s not exactly a foundation in fashion, but Tatar, who says she has been “designing my whole life,” also interned at W magazine (the sister publication of WWD), and took classes at Parsons — all while still working in the corporate world. That, in fact, is how she funded her collection.
First time out? Yes.
Any sales? Not yet.
What to expect: “For the spring collection, I’m calling it prep rock,” the designer says. “It’s a rebellious schoolgirl kind of look.”

SARI GUERON
Pedigree: Israeli-born, Connecticut-bred Sari Gueron, 29, won the GenArt Styles competition in the ready-to-wear category just two years ago, an auspicious start for the Rhode Island School of Design grad. But she says that her most memorable experience thus far has been her time interning at John Galliano in Paris in 1996. After a brief stint at Oscar de la Renta as an assistant, she started working on her own line.
First time out? Yes.
Any sales? Gueron has been in Henri Bendel for three seasons, and recently made a deal with Kirna Zabête.
What to expect: The mood for this season is, “nonchalant elegance with a vintage-y, light, flowy feel,” Gueron says. The designer prefers to focus on structure and shape rather than ornamentation.

COSTELLO TAGLIAPIETRA
Pedigree: Jeffrey Costello, 30, and Robert Tagliapietra, 42, are no strangers to collaboration. Both of them have have worked with a range of stylists and designers over the years — most recently with Victoria Bartlett at VPL — and have developed a reputation for fine tailoring in high-quality fabrics (both designers had grandmothers who worked as seamstresses).
First time out? Yes. The duo began working on the line three seasons ago, but this is their first full collection.
Any sales? The line is currently carried at Barneys Japan. They also have a roster of private clients, which includes Patty Scialfa.
What to expect: “We started working with jerseys,” Tagliapietra says, “then it became a collection.” Look for slinky silhouettes in a range of colors.

LYNN PARK
Pedigree: This Dallas native started her fashion education on the West Coast at L.A.’s Otis College, but completed her studies here at F.I.T. in 1999. Park, 30, costumed the L.A. production of Neil Simon’s “Biloxi Blues” and did technical design at Ralph Lauren before launching her own collection.
First time out? No. This is Park’s fourth show.
Any sales? Park opened her Wooster Street store right after 9/11, but the designer says that it’s doing well now.
What to expect: “I was really influenced by glamorous movie icons,” Park says, which translates into “flowy dresses and lots of chiffons.”

ABAETE
Pedigree: Paris-born Laura Poretzky, 27, started her company in June of last year with swim and resort lines, and is showing her first ready-to-wear collection this fall. The RISD grad did concept design at Ralph Lauren before partnering with backer and friend Cindy Weaver on Abaeté, which Poretzky christened with her mother’s maiden name.
First time out? Yes.
Any sales? The designer’s swimsuits are currently at Barneys New York, and her resort looks are at Intermix and Kirna Zabête.
What to expect: “The theme is ballet and the last Russian tsarinas,” Poretzky says, “things you can wear from the beach to a night out.”

EDWING D’ANGELO
Pedigree: Edwing D’Angelo says he was born into a “fashion family” in Colombia, which boasts five generations of tailors and seamstresses. He decided to go into the business when he was trying to study for the LSAT and realized that he was paying more attention to the show “Full Frontal Fashion” than his textbooks. Shortly after that, D’Angelo, 30, made his sister’s prom dress, and he soon had requests from all her friends.
First time out? No. He showed for spring 2004.
Any sales? The designer sells to boutiques such as Trés Elegant in Brooklyn and Concrete in Manhattan, and has his own store on 125th Street. Prom is a big season.
What to expect: Sexy dresses and gowns in various prints like garden motifs and graffiti.
Moment of struggle: “When I told my mom I wanted to go into fashion, she kicked me out of the house,” D’Angelo says. “She didn’t speak to me for two years. But now we’re on good terms.”

MAC MILLAN
Pedigree: After graduating from the London Fashion Institute, Jane McMillan worked at Bella Freud and Ally Capellino. She started her line in 1997.
First time out? Yes, in New York.
Any sales? The line is currently in boutiques in Europe, such as Choice in London and Berner in Germany, and the Duchess of York is a regular client, according to McMillan.
What to expect: This season, the theme is “Manhattan rock princess,” meaning big hair and lots of eclectic prints.

HOLLY KRISTEN
Pedigree: As a junior at Clemson University, Holly Kristen (née Holly Kristen Nolan) started designing and sewing clothes for her family after her father lost his job. The pre-med student, now 23, then launched a made-to-order business, and is showing her first ready-to-wear collection this season.
First time out? This is her first rtw show.
Any sales? The designer expects to bring in $1.6 million from her made-to-order business this year, and recently signed a lease on a 90,000-square-foot penthouse showroom on 57th Street. Kristen also donates 5 percent of her company’s profits to her foundation, the Holly Kristen Childhood Cancer Foundation, which she started to help kids like her younger brother Travis.
What to expect: “I usually get my inspiration from architecture and nature,” Kristen says. Look for sundresses, skirts and shorts in watercolor shades.
Notable projects: Kristen, whose made-to-order line ranges in price from $2,000 to $20,000, is currently designing an all-amethyst gown priced at $1.2 million (that’s right, made entirely out of amethysts).

CRAIG ROBINSON
Pedigree: Craig Robinson, 32, started selling his handmade wares to Lower East Side boutiques about a decade ago. The New Mexico native says he grew up a “ranch kid” with very few stores in the area, so he learned to sew his own clothes.
First time out? No. He showed his made-to-order line last fall.
Any sales? Robinson says he’s quadrupled his business since he opened his Fifth Avenue atelier three years ago.
What to expect: On top of the usual tailored suit pieces, lots of HotPants and raincoats with Cruella De Vil collars.

ALEX GRANT
Pedigree: RISD grad Alex Grant, 30, worked for Vera Wang as an assistant designer for a year before returning to her native St. Vincent’s to work as a buyer for various boutiques. While there, she assisted on costume design for “Pirates of the Caribbean.”
First time out? Yes.
Any sales? Nothing concrete yet.
What to expect: “I’m from the Caribbean, so it’s what you would expect from a designer from there,” Grant says. “It’s a lot of color.”

BRILLIANT BY ELENA HUMPHRIES
Pedigree: Elena Humphries, 34, who holds a fine arts degree from Parsons, went back to school (there) to get an associate’s degree in fashion when she realized that that was what she wanted to do. After brief stints at Ralph Lauren Intimates, DKNY Kids, Mossimo and Kate Spade, she started her own line a few years ago.
First time out? Yes. While Humphries has been in business for three years, she’s shied away from staging time-consuming shows. This time, however, MAO convinced her it was worth the effort.
Any sales? Currently carried in Takashimaya and Fred Segal.
What to expect: Gowns geared toward starlets and rock stars. “Rock ’n’ roll meets glamour — but not glam,” Humphries says.
— Edmund J. Lee