The Dallas Market Center is promoting itself as an international wholesale destination. 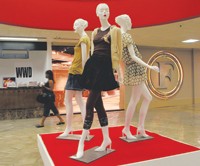 The Dallas Market Center is promoting itself as an international wholesale destination.

DALLAS — The creation of FashionCenterDallas in March 2004 to replace the International Apparel Mart was so successful that it won a prize last month from ReBrand 100 Global Awards, a juried international competition that evaluates brand revitalization.

But the brightly lit venue atop the World Trade Center within the Dallas Market Center is only the beginning. DMC leadership is refining the wholesale complex and working to attract more international and domestic buyers and exhibitors with particular emphasis on contemporary, junior contemporary and prom.

A $1.5 million event space is under construction in the atrium of the Trade Mart, a home and gift center joined to the World Trade Center. With state- of-the-art lighting and sound, the venue will launch as the site of the Dallas Fashion Awards formal gala Oct. 28.

“It will seat 1,000 with a new floor, a two-story glass feature wall and lounge areas,” said Cindy Morris, chief operating officer of the DMC, which operates and co-owns the complex. “We are also giving the whole exterior facade of the Trade Mart a new look.”

The company is making plans to celebrate its 50th anniversary next year, commemorating the opening of the first DMC building, the Homefurnishings Mart, now The International Floral and Design Center. An anniversary logo, “Big Past, Bigger Future,” will appear on marketing materials and a 100-foot banner across the World Trade Center. The anniversary celebration will mesh with January festivities for the opening of a $40 million, 500,000-square-foot expansion of the Trade Mart to house more lighting showrooms.

Courting international retailers, who often represent chains with major buying power, is a priority. The DMC long has focused on retailers in Latin countries, such as El Palacio de Hierro in Mexico City, and now there are new efforts to encourage commerce with China and Europe. Bill Winsor, DMC chairman and chief executive officer, and Morris collaborate with the management of the Shanghai Mart and the Brussels Mart, an international strategy that brings buyers to FashionCenterDallas and helps Dallas exhibitors connect with factories abroad.

They plan to introduce six to 10 Chinese designers in a cohesive exhibit at the October market.

“We looked at the product and it’s a great opportunity for us to create a showcase of high-end designers from China,” Winsor said. “We’re looking at how we can facilitate access and interest between U.S., Chinese and European buyers. Our exhibitors and retailers are looking for ways to manufacture faster and cheaper.”

The Chinese will be situated in one of the temporary trade shows, which have grown 20 percent so far this year and are expected to rise another 10 percent by yearend, said Peg Canter, vice president of trade shows. Scene and Collections at Scene, juried shows of contemporary and bridge products, will have 125 booths showing 250 lines in August, and 165 cubicles offering 325 lines in October, she predicted.

The Temporaries on 12 show offers a little of everything. In August, there will be about 900 booths, with a concentration of young contemporary, prom and western duds.

“Prom is big growth for August market,” Canter noted. “We had an 8 to 9 percent increase in exhibitors. Western is a big show in August, too. Western alone is 400 booths.”

Temporaries on 12 also will have 145 contemporary and 155 misses’ booths, many of which show more than one line.

To promote the DMC complex as an entire package, including the 550 permanent showrooms at FashionCenterDallas and an additional 1,450 hard goods showrooms throughout the center, in May the company distributed to potential and existing vendors a CD-ROM that chronicles the depth of product and services housed at the center.

The DMC also has introduced InStore, a quarterly magazine that offers business strategies and tips geared toward specialty stores without any advertising. It launched last fall.

“Since I’ve been here, I’ve never gotten so many letters and e-mails about anything we’ve done,” Morris pointed out. “We felt very strongly that we needed a magazine to help retailers to improve their businesses.”