Designs by four Central Saint Martins MA student designs will be produced and sold by Birkenstock starting in February.

LONDON — Like Netflix subscriptions, wine of every color and spray-on root concealer, Birkenstocks were among a chosen few products that didn’t suffer the negative effects of lockdown.

With people rarely leaving home and their feet tucked discreetly under the desk during video calls, they became the go-to work shoe for anyone who considered sneakers to be too fussy in times like these.

Indeed, with millions of people locked up in their homes, “the word ‘comfort’ got a whole new meaning,” said the brand’s chief executive officer, Oliver Reichert, in an interview with WWD.

Despite the fact that its stores had been closed for several weeks, and its wholesale partners had — and still have — “considerable problems,” Reichert said sales have remained at last year’s levels. 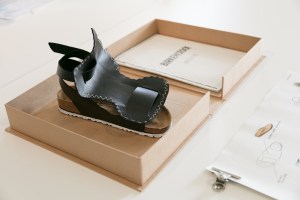 Long before lockdown, Birkenstock had always been keen to push into new directions, collaborating with luxury labels such as Rick Owens, Valentino, Beams and, lately, Proenza Schouler.

More recently, it turned to BA and MA students at Central Saint Martins in London to cast an eye over, and help give structure to, the brand’s archives. As part of the project, which began in 2018, Birkenstock also asked the students to put their creative stamp on the distinctive sandals with the orthopedic insoles.

BA students were tasked with sifting through the archives and coming up with inspirations, while the MA students were charged with creating new Birkenstock designs.

The brand said the sampling process was complex and took well over a year: Designs had to meet orthopedic standards, be wearable — and no one could mess with the famous sole. Birkenstock produces up to 80,000 units daily, so any designs had to conform with its machines and techniques.

A panel of judges — including Richard Quinn, Mary Katrantzou, Roksanda Ilincic, Reichert and Fabio Piras, CSM MA fashion professor — picked 10 winning designs. The list was later whittled down to a final four styles that will go into commercial production with the student’s name embossed on the foot bed.

The collection of four new styles, plus one archive reissue, will get its own campaign, to be photographed by Walter Pfeiffer in Paris. He plans to capture the four finalists — Alex Wolfe, Alecsander Rothschild, Saskia Lenaerts and Dingyun Zhang — with their winning designs and a few looks from their graduation collections. 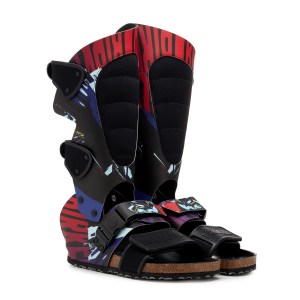 Reichert said the company wants to invest in emerging talent and, in this case, gave them “carte blanche, rather than briefing them with clear expectations. As Birkenstock is broadly democratic and accessible to all, our goal is to reach these new creatives, and allow them to dive into our extensive product development and manufacturing process.”

He also wanted the students’ help with the archive, asking them to make it “more extensive, researched and structured.” The company’s archive was not in great order, so “we had to start somewhere, given that before the 1950s, we produced footbeds, not sandals.”

As part of the overall project, Birkenstock also moved its archive to Ockenfels, a medieval castle near Cologne, Germany, one of the company’s business locations.

He decided to work with CSM because of Alistair O’Neill’s BA fashion history and theory course, which had previously worked on projects with major brands.

Piras, meanwhile, told his MA students to unleash their imaginations in creating the new styles.

“I told them, ‘Don’t be afraid of being creative.’ It’s much easier to bring a level of functionality to something that’s super creative,” rather than the other way around, Piras said in an interview.

“You start from a point of view that is already quite free and creative — and then you edit and simplify your ideas. That is part of design development,” he added.

Piras said he wanted the Birkenstock designs to inspire — rather than limit — his students. “It was about bringing the designs into a world of modernity — and wearability,” he said. 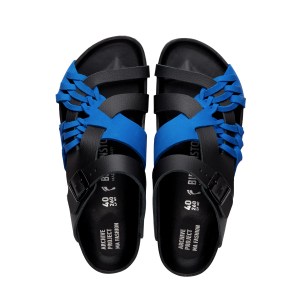 The Birkenstock Tallahassee, an archive re-issue.  Photo Courtesy of Birkenstock

In 2018, Birkenstock gave the BA students access to the brand archive. The panel of 12 judges chose the 10 finalists, who each took home a bursary award for their work.

Wolfe, one of the four students whose design will be put into production, called his Moto Sandal “a turbulent twist on Birkenstock’s orthopedic history. It collides the idea of a supportive shin brace with protective motocross gear.”

Rothschild said his inspiration came from childhood, “growing up in a family of painters, sculptors and designers.”

He said he looked to the “world of sculptures, specifically Brancusi. What I found interesting in Brancusi is his shapes, of course, but mostly the contrasts in the materials and textures,” he said.

As a result of the archive research and to complement the student designs, Birkenstock will re-create its Nineties Tallahassee style, in contrast color designs. The Tallahassee will be the first Archive Re-Issue style.

The CSM and Archive Re-Issue collection will be sold through select stores worldwide, and on 1774.com, from February 2021. 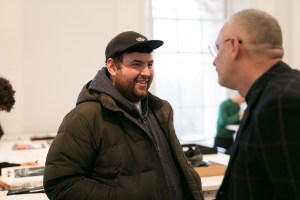