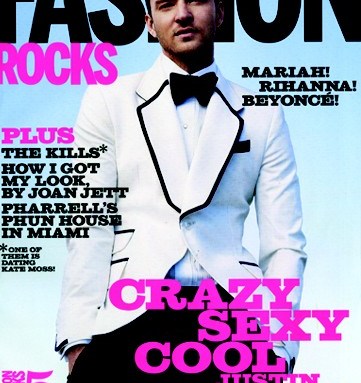 Take pop stars, fashion photographers and the watchful eyes of Vogue editors charged with producing a magazine to celebrate the marriage of music and fashion. The result: Fashion Rocks, a magazine that’s Rolling Stone with a couture gloss, profi ling some of the most talented musicians of the day (many of whom happen to be performing in the annual Fashion Rocks concert) and performers who inspire fashion through their individual sense of style.

Fashion Rocks the magazine has grown in scope since its fi rst few issues when Condé Nast Media Group tapped Robert Love to edit the issue. Three years ago, Media  Group president Richard Beckman asked Vogue editor in chief Anna Wintour to take over the title, and Wintour tapped Jonathan Van Meter to serve as editor in chief. Van Meter has served as contributing editor at Vogue since 1991 and was the founding editor of urban music magazine Vibe. He’s also a contributing editor at New York and has written for Spin, Esquire, Vanity Fair and The New York Times Magazine.

“The first year we did it, I remember feeling like it was hard to call people and say ‘I’m from Fashion Rocks,’” says Van Meter, because few knew about the title. “In the beginning there was a slight cringy-ness to it. We had to do a lot of talking people into it. Then it got so much easier. Now, we’ve got Justin Timberlake on the cover. We had people clamoring for the cover this year.”

The magazine now mirrors Vogue in terms of quality and scope. Chart-topping pop artists universally recognized by American TV viewers have all been included — Usher, Beyoncé, Faith Hill, Keith Urban, the Black Eyed Peas, David Bowie, Jennifer Lopez, Gwen Stefani and Alicia Keys have been shot by the likes of Vogue photographers Steven Klein, Annie Leibovitz, Norman Jean Roy and Mario Testino. Styled-up rockers — some wearing their own clothing lines — pose with fashion’s most recognizable models in breezy, artful shoots, compared with the promotional artist photos that were included in its early issues.

“For me, I didn’t want it to look like a well-produced version of Spin,” says Van Meter. “So having [Steven] Meisel and [Steven] Klein doing luscious 10-page fashion  stories keeps it away from that.” Candid shots of a subject are just as beautiful, he says. In this year’s issue, adds Van Meter, “Alex Majoli shot Rihanna five seconds before she went on stage.”

Though Fashion Rocks’ highbrow sensibility comes from the fashion insiders who produce the issue, the magazine still has to attract the mass appeal of its featured stars. “Fashion is usually converged with obscure music, stuff that’s on the horizon and bands that few have ever heard of. Fashion Rocks is about the link of popular music,” says Van Meter. “We figure out how to make the magazine relevant, though it’s about music that’s on the radio all the time. It forces us to think about fashion in a certain way. It makes us think about what happens in the fall and apply it to the mainstream world of popular culture.”

For Van Meter, that application is easy, considering he’s always been the kind of guy who craves his MTV. “I still feel that there’s part of me that loves pop radio and loves to watch music videos. I’ve never lost interest in the collision of those two things,” he says.