The Year of Ralph

What a time for Ralph Lauren - flagships opening around the world, explosive growth, expansion in various price points and categories and a magnificent gala celebrating his company's 40th anniversary. 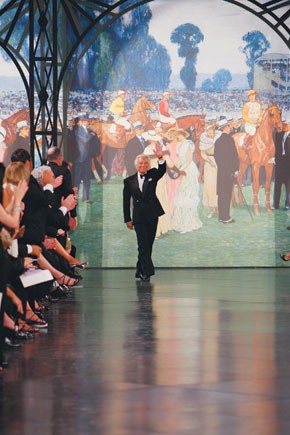 What a time for Ralph Lauren — flagships opening around the world, explosive growth, expansion in various price points and categories and a magnificent gala celebrating his company’s 40th anniversary.

Ralph Lauren could easily be the poster boy for “Fabulous at 40.”

View the full coverage of  WWD Year in Fashion 2007 at www.wwd.com/yearfashion07 The chairman and chief executive officer of the $4.3 billion Polo Ralph Lauren Corp. has had a busy 12 months. Among some of the year’s highlights was a family trip to Moscow, where Lauren unveiled two flagships; winning the Council of Fashion Designers of America’s first American Legend Award (presented by Oprah Winfrey) and the Menswear Designer of the Year the same night, and a gala and spring fashion show in September at the Central Park Conservatory Garden in Manhattan to celebrate the big birthday. In light of his longevity in the business, the designer was the subject of numerous business profiles and appeared on such covers as Fortune, Town & Country, Men’s Vogue, Architectural Digest, Esquire, GQ Russia and Japan’s GQ throughout the fall.

“I can’t believe I’m living this life,” exclaimed Lauren at the anniversary gala to a crowd that included Mayor Michael Bloomberg, Sarah Jessica Parker, Donna Karan, Carolina Herrera, Dustin Hoffman and Robert De Niro. Designers, celebrities, retailers and friends mixed and mingled under the stars, where dinner was served among 10 400-pound urns of pink hydrangeas, 11 chandeliers and table scapes in full Ralph Lauren splendor. Bloomberg took the mic and exclaimed, “If you called central casting and said, ‘Find me a great New Yorker,’ they would send Ralph Lauren.”

But New York was hardly the only place where Lauren made his mark this year. Following the opening in 2006 of the largest Ralph Lauren store in the world — an 18,000-square-foot flagship in Tokyo — Lauren put down roots in Moscow in May.

“I feel like I’m an ambassador of America,” said Lauren after he cut the ribbon of his first Russian flagship — a stately three-floor white house located down the street from Red Square. “I feel so proud to be an American brand in Russia.”

He said when he was invited to go to Moscow several years ago, he felt the market wasn’t ready for his clothes.

“I think they get it now. Russian people have a history of a lot of elegance and a lot of class. This is an Old World country. So it’s in the blood somewhere,” said Lauren, as he unveiled a pair of outposts in Russia, the land of his forebears. “The energy and the exuberance about luxury and life, the appetite, is amazing.

“Certainly, the American market has been pretty great. But here there’s an energy and a newness that comes from a different place. [Russians] have money to spend,” he continued. “Their appetite is like when you sit down to a meal starved. I think that’s why the market here is going to boom, because there’s energy and a hunger for product, luxury and exclusivity.”

Accessories, in fact, receive extensive play at his Moscow flagships. To help further fuel the growth in the category, Polo and Compagnie Financière Richemont forged a partnership in March, establishing the Polo Ralph Lauren Watch and Jewelry Co. Sarl, a 50-50 venture based in Switzerland. The firm will design, create and distribute luxury watches and fine jewelry under the Polo and Ralph Lauren brands, with entry prices of $3,000 to $5,000 for watches. The products will bow next fall. The deal marked Richemont’s first such venture and Polo’s first foray into the precious jewelry and luxury watch businesses.

Deepening its commitment to the Internet, Polo bought out the 50 percent ownership interest of Ralph Lauren Media held by NBC-Lauren Media Holdings, a subsidiary wholly owned by NBC Universal and ValueVision Media in March, giving Polo full ownership of the polo.com operation in a cash transaction of $175 million. The Ralph Lauren Web site is the largest single place to buy Ralph Lauren in the world. The site has had a five-year compounded growth rate of 38 percent a year.

In recent years, buying back licenses has been a successful strategy for Polo, for better control of quality, distribution, image and company growth. To that end, the company in April purchased the remaining 50 percent interest in its Japanese master licensee, Polo Ralph Lauren Japan, from Onward Kashiyama and others, for about $23 million, as well as 80 percent of the outstanding shares of Impact 21 Co., its Japanese sublicensee for women’s, men’s and jeans apparel and accessories, for approximately $22 a share.

But not everything at Polo this year was about the Ralph Lauren label. In January, the company established a division called Global Brand Concepts. Through this unit, Polo will develop exclusive non-Ralph product lines for select retailers, and handle the manufacturing, marketing and advertising.

The first agreement was signed with J.C. Penney Co. Inc. for a lifestyle collection called American Living. The brand, exclusive to Penney’s in the U.S., will comprise women’s, men’s and children’s wear, as well as accessories, intimate apparel and home goods, and is expected to be the biggest launch in the moderate department store’s history. The first line will be delivered to 575 Penney’s doors in February. Via Global Brand Concepts, Polo expects to generate $1 billion at retail over the next five years, and will take the American Living concept to retailers in other countries.

This year, Polo and Kohl’s Corp. also introduced the Chaps Home Collection, which is available exclusively at Kohl’s stores and online at kohls.com. The retailer already has a thriving clothing and accessories business for women, men and children under the Chaps label.

As the keynote speaker at the WWD/DNR CEO Summit in October, Lauren spoke passionately about his love of the business and how he has built his company by keeping true to himself and his beliefs. He explained that all these lines, at different price points, can coexist, and they have no bearing on the designer collection.

He emphasized he sees lots of room for Polo to expand, and is always on the lookout for new ideas. “And this is a public company that needs growth, but proper growth, not panic growth, growth on every level, innovation is the word,” said Lauren.

Reflecting on his 40 years in business, Lauren said it’s important to understand where young people are going, where they are shopping and who’s buying the merchandise. “My method is to stay tuned, have a good team of people, to know my identity, to build stores, to have a vision.”

He told the audience that he’s been able to maintain his vision through his brand people and his product people. “I’m the conscience of the company,” said Lauren. “I am working every day. I pick swatches….I have built a company and team of people in terms of design that are passionate about what they’re doing, and we have developed leaders, we have trained them over 40 years, and there are lots of people who have trained other people and grown.”

And to Lauren, it may have been 40 years of hard work, but it’s also a labor of love.

“I love to come to work every day. I love it because I have a team of people in my company who are creative and exciting,” said Lauren. “There’s innovation, there’s excitement in the air. And by having fun and enjoying your business, you can also be very successful, and I think we have proved that.”