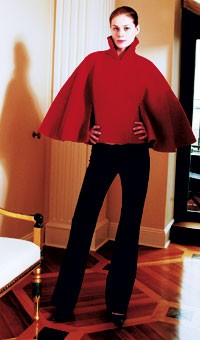 NEW YORK — Meet seven young designers from five new labels who are navigating their own course through the sometimes choppy waters of Seventh Avenue. What are they looking forward to? That one day they’ll be able to look back and laugh.

“I’m an insanely devoted New Yorker,” says 27-year-old Katie Zorn, who was born in the city and graduated from Parsons less than a year ago. “Everything I design is firmly rooted in New York.”

True to her word, Zorn’s chic and unfussy eponymous second collection reflects the sharp edges of the city with clean shapes that buck fall’s trend of ultrafeminine embellishment. Even her take on the newly popular hippie-inspired poncho is cinched in the back, giving the bohemian shape a little urban structure. Zorn’s New York has a distinctly uptown slant, as seen in looks like a pair of creamy silk charmeuse pants paired with a cashmere tank top and an ivory bouclé bolero. But pieces such as a short black wool jacket with a swingy cape back or a sexy body-skimming dress with mesh panels could easily get a visa to travel below 14th Street.

Although her first collection didn’t attract any retail accounts, Zorn sold the spring line privately at a trunk show at her parents’ Upper East Side apartment, and another at L.A.’s Chateau Marmont, scoring nearly 40 orders from newly minted fans such as Eleanor Lembo, Fernanda Niven, Charlotte Ronson and her mother, Ann Jones, as well as “Miss Match” actress Lake Bell.

Now, with her fall line, which wholesales for $150 to $600, the designer is resolved to stay the course. “I’m going to go stand in line at Bendel’s open call. I decided to think of it as a rock concert that you really want to see,” Zorn says. “Basically I’m going to do whatever it takes to survive.”

In fashion terms, Matthew Earnest is a bit of a late bloomer. The 24-year-old designer was a sophomore at the University of Texas when he realized for the first time that fashion could be his calling — an epiphany sparked by a screening of the Isaac Mizrahi documentary, “Unzipped,” and a serendipitous sit-down with fellow Texans Todd Oldham and Tom Ford. After a trial summer session at Parsons, Earnest enrolled in the fashion program there.

Since then, he has more than made up for lost time. While still a senior, he staged his first runway show during the fall 2003 collections. “Basically, I didn’t sleep,” he recalls. “But I was able to learn a lot and meet with buyers.” The head start paid off, since Henri Bendel put in an order for his spring line, an ode to his prep-school-by-way-of-Texas upbringing.

For fall, Earnest delved into his preppy roots again or what he calls “an Ivy League, fox-hunting feel.” But the skinny tailored skirts and pants cut in suede and men’s suiting fabric, colorful piped jersey dresses and body-skimming henley tops are far from a direct copy of collegiate style. “A lot of people do preppy and it ends up looking like ersatz Ralph Lauren,” says Henri Bendel fashion director Scott Tepper of the line, which wholesales for $70 to $600. “Matthew has a really witty take on it.”

Not long ago, Earnest returned from an initiation of sorts into another fashion club — the Parisian fabric trade show Première Vision. He found himself sifting through swatches with the likes of Diane von Furstenberg. “It was crazy, and I lost my credit cards,” he says. “But everyone was really nice. All of the New York people helped me and guided me.”

As many New Yorkers know, living with your friends can strain any relationship. As for living and working together — well, that can be a recipe for disaster. But for roommates Angela Deane, 27, and Christopher Crawford, 24, designers of the fledgling collection Christopher Deane, this certainly isn’t the case. “We’re both pretty stubborn and opinionated,” Deane says. “But when we’re working and we argue, it’s brilliant. It totally brings about a better final product.”

If their recent collection is any indication, tensions must have run high from October to February. The pair evolved from a girly spring line chock-full of candy-colored seersucker to a more sophisticated collection for fall. Their slinky jersey dresses and tops, tiered chiffon skirts and cape-shouldered trenches meld the glamorous and the gamine. The duo attribute this to Deane’s quirky, tomboyish touch which, they say, tempers Crawford’s love of all things sexy and sultry.

And, while the line wholesales for between $98 and $375, Deane and Crawford are also in the retail game with a year-old, freestanding shop in the East Village boutique, called 436. The collection is at Scoop, Searle and Eva in New York, too, and, according to Scoop owner Stefani Greenfield, who just began stocking Christopher Deane this season, her stores already have sold 80 percent of the order. “It’s a great feminine collection,” Greenfield says. “It’s like being a lady with a twist. And God forbid you don’t have a seersucker skirt for spring.”

On the day of Vena Cava’s fall fashion show, all systems were a go — except for the guest of honor, Maggie Gyllenhaal. After waiting for nearly an hour, design duo Sophie Buhai and Lisa Mayock let the show go on. As it turns out, the actress’ absence was merely a mix-up. “She got the date wrong,” Buhai says. “She showed up the next day, all dressed up in our clothes.”

The Parsons grads, however, weren’t crushed. Their approach is a little bit more low-key than that. And, for the record, the indie queen grew up in L.A. on the same street as Mayock.

The looks in Vena Cava’s concise second collection, which range in price from $100 to $400, don’t have a grand theme. And while the designers’ fresh takes on classic silhouettes, such as a side-buttoning black wool coat with a graphic trim or a navy dress accented with brass studs, might not wow on the runway, they would be welcome in many a closet. “We really like to have very personal details,” Mayock explains of their subtle designs. “Even something that only you know about.” Beyond their take on the classics, however, are pieces, such as a poppy red chiffon bolero, that add an unexpected freshness.

This season’s goal is to capture retail attention — otherwise, for Mayock and Buhai, it may be back to hawking their wares at a trunk show like the one they hosted at Buhai’s parents’ home in L.A.’s Hancock Park. “It was really nice, actually,” she says of the poolside affair. “It feels like an old-fashioned way of selling clothes.”

Six floors above the very frenetic corner of 27th Street and Broadway, the space where designer Nicholas “Nicole” Kunz, 28, and her brother and business partner, Christopher, 30, are hard at work is surprisingly calm. “Yeah, except if there’s a shooting,” Christopher says, getting up from his seat to shut the windows on a wailing siren.

But maybe it’s because of the hustle and bustle so close at hand that the Kunzes have been able to create their line, Nicholas K, without masses of fanfare. Now in its third season, the collection is already selling in Los Angeles at Tracey Ross, Fred Segal on Melrose and American R.A.G., as well as at Beams in Japan. And although it’s currently available only at Destination in New York, the fall line, which wholesales from $75 and $300, will also be at the NoLIta boutique Poppy.

Kunz’s designs capture an elusive form of cool — one that’s louche, anonymous and slightly rumpled, but still chic. For fall, the skinny, tomboyish silhouette consists of straight-legged pants, men’s-style button-downs and coats with a slightly military feel. Even the few beaded chiffon dresses and camisoles have a certain edge.

This family affair augurs well for the long haul. Nicholas boasts 10 years of experience on Seventh Avenue, working for Coach, Calvin Klein, Nautica and DKNY, among others. Christopher, who has an MBA, serves as in-house troubleshooter and deal-maker. And both are quite sensible when it comes to their topsy-turvy business. “A lot of young designers want to be creative,” Christopher says, “and aren’t worried about what will sell.”

But that’s not to say that Nicholas has compromised her creativity. “I don’t think it has strayed too much from my original vision,” she says. “But we do listen to a lot of our buyers and customers and what they want.”