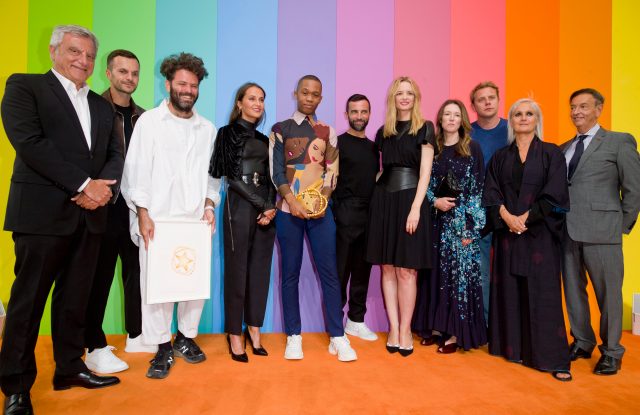 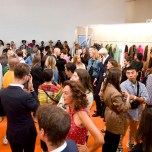 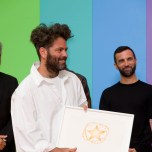 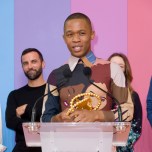 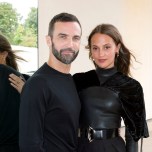 PARIS — Thebe Magugu on Wednesday became the first African designer to win the LVMH Prize for Young Designers, underscoring the continent’s potent appeal as a source of both creative talent and future luxury consumers.

The South African women’s wear designer beat some 1,700 applicants from 100 countries to walk away with a grand prize of 300,000 euros, plus a year of coaching from experts at luxury giant LVMH Moët Hennessy Louis Vuitton, parent of brands including Vuitton, Guerlain, Dom Pérignon and Sephora.

“I really couldn’t believe it,” an elated Magugu told WWD after the ceremony. “I have the deepest respect for LVMH and the brands it houses, because I’ve looked up to every single one of them since high school days, so to be recognized in this way is a very deep honor.”

At 26, he was the youngest designer in the competition and one of two Africans to make the list of eight finalists, alongside Nigerian designer Kenneth Ize.

While Magugu considered the win symbolic, he was quick to point out that he represents a deep well of untapped creativity. “There are so many brilliant designers in South Africa, in Africa in general, who are doing such incredible work, so yes, even if it is a win, it’s always just been there anyway,” he said.

It was the first edition of the prize held since the death of Karl Lagerfeld, the doyen of LVMH designers, who was creative director at Fendi for a record 54 years.

The runner-up Special Prize, renamed the Karl Lagerfeld Prize in his honor, went to Israeli designer Hed Mayner, underscoring the growing importance of talents from outside the traditional fashion capitals of Paris, Milan, New York and London.

Mayner, who has won plaudits for his gender-fluid designs that play on proportions and layering, will receive 150,000 euros and a one-year mentorship program provided by a dedicated LVMH team offering expertise in such areas as intellectual property, sourcing, production, distribution, image, communication and marketing.

“It’s a very open prize, and the beauty of it is also to have amazing talents like them, who are not very well-known, win the prize and be able to develop their business thanks to LVMH,” said Delphine Arnault, the force behind the award and a key talent scout at the group.

“That’s really the specificity of the prize: it’s not about nationalities. You can apply from anywhere in the world. The only thing you need to have is basically a computer,” she said, noting the competition was open to anyone between the ages of 18 and 40 who has commercialized at least two collections.

Magugu’s collection, titled African Studies, blended the codes of men’s and women’s wear with a mix of tailored silhouettes in sturdy outerwear fabrics and fluid pleated silhouettes, some printed with entries from the journals in which he used to record his nightmares as a child.

Arnault noted that the clothes were a combination of the traditional and the experimental, playing with volumes and South African know-how.

“The philosophy of the LVMH prize is to find a super-creative talent who has a lot of potential and to help them grow,” she said. “I think that’s going to bring a lot of awareness to his brand and it’s going to help him grow his business. The potential is really there — he’s extremely talented.”

Sidney Toledano, chairman and chief executive officer of LVMH Fashion Group and a member of the prize jury, lauded the “excellent” quality and “maturity” of the winners — plus the storytelling, sustainability and technology baked into their collections. But he said none of that overshadowed the strong design appeal of their clothes.

“It’s better to be sustainable today and so on, but at the end you have to create the desire — and both of them achieved that,” Toledano said.

Ghesquière said he was impressed by Magugu’s commitment to building a business in Johannesburg, where he lives.

“His wish is to stay at home, stay in his country and develop an international brand, and I think that made a big echo during the presentation: to really have this new language, not to migrate to a big fashion capital to get credit — to be very brave and to try to build a house elsewhere,” he said.

The Vuitton designer said the jury was aware of breaking new ground by spotlighting a talent from Africa, a hitherto neglected source of fashion inspiration. “We are conscious of everything. This world is absolutely evolving quickly and it’s amazing, especially with news like today, so yes, we are a part of this world,” he said.

Waight Keller noted that LVMH could help Magugu resolve hurdles such as exporting his clothes. “We wanted just to say that this prize is about giving opportunity and really to invest in people that we think are going to make a difference where they come from,” the Givenchy designer said.

Magugu said he planned to expand his staff of three. “Up until now it’s just been me and those three people, and a lot of it is on me, from a lot of bookkeeping to the drafting of the patterns to some of the cutting, so it’ll be really great to breathe for the first time and get people to occupy those positions, and then I’ll also get a studio where I can work really comfortably from,” he said.

With just five wholesale accounts, he also plans to meet key buyers at the NOB showroom in Paris later this month, though he has no plans to show abroad soon.

“I really don’t want to do anything grand with this money. I really want to look at what my immediate needs are and use the money toward that. Making sure the foundation is solid will allow me one day to show at the main capitals’ fashion weeks,” Magugu explained.

It is the second award this year for Magugu, who also won the overall award for curation and fashion content at the International Fashion Showcase in London in February.

His win coincides with a surge in interest in African design, from Beyoncé wearing Senegalese label Tongoro in her “Spirit” video to Naomi Campbell investing in Arise Fashion Week in Lagos, where she also walked in several shows last April.

Bernard Arnault, the chairman and ceo of LVMH, is taking notice. The most recent issue of Eyes, the luxury conglomerate’s in-house magazine, quotes consultant Coralie Omgba as forecasting the continent’s market for luxury goods — worth $5.9 billion in 2017 — will grow by 30 percent in the next five years

In April, LVMH’s Dior brand chartered two planes to fly guests to its cruise show in Marrakech. In addition to being a striking display of corporate might — the fashion spectacle at the El Badi Palace featured more than 110 looks — it also acted as a showcase for guest designers from Africa and beyond.

Magugu’s work has frequently tackled political issues. The shirt he wore to collect his prize featured an illustration by Phathu Nembilwi alluding to a series of highly publicized femicides in South Africa, while his latest collection referenced the Black Sash women’s resistance movement during the apartheid era.

“I think people are very interested in things outside of Europe and America. I think with places, for example like South Africa, there’s so many things that people don’t know at all. I think there’s an entirely new style and even design lexicon,” he noted.

“My collection is about the women of the Black Sash, and up until now, people didn’t really know who they are, but after telling them, they’re just so blown away by the contributions they had to South Africa. So I think there’s just newness from emerging markets and places the world is just hungry for,” Magugu added.

Mayner, the first Israeli to make the final round of the competition, agreed. “I think that other places in the world have a place now, and there is interest from the capitals in what is happening in other places, and it’s wonderful,” he said.

The Tel Aviv-based designer, who has 70 points of sale worldwide, plans to open a studio in Paris, where he shows his collections. “It means that I can be more focused on the creative aspect and have help in other matters,” he said of the prize money.

In addition to Ize, the other finalists, selected by a committee of 63 fashion industry experts, were Anrealage, designed by Kunihiko Morinaga; Bethany Williams; Bode by Emily Adams Bode; Phipps by Spencer Phipps, and Stefan Cooke by Stefan Cooke and Jake Burt.

Delphine Arnault noted they shared a focus on green issues. “The environment and sustainability and upcycling: all these themes are extremely important to them,” the executive said.

She lamented the absence of Lagerfeld, who championed the prize from its launch in 2013, frequently recalling that his career took off after he won a Woolmark prize alongside Yves Saint Laurent in 1954.

“We miss him a lot. Fashion misses him a lot. The prize is never going to be the same without him. He was really generous with his time, with his advice,” Arnault said.

“He was so nice to those young designers. He was always coming to the showroom in March and it was two days before his show, but he came for one hour, he said hello to everybody, saw the work of everybody,” she added.

The prize-giving ceremony, traditionally held in June, was postponed this year, with a source familiar with the situation citing calendar conflicts among some of the senior executives and designers expected to attend the event. LVMH plans to hold the next edition in June 2020.

For the first time this year, online retailer 24S — formerly known as 24 Sèvres — has launched a capsule collection of outfits designed by the finalists, which it celebrated with a cocktail party at Paris institution Lapérouse on Tuesday night.

Eric Goguey, ceo of 24S, said the collection appealed to the site’s most fashion-forward customers. “They are fashion enthusiasts who are interested by these kinds of pieces because they are slightly unusual and none of their friends will be wearing them. It’s important for our image to have all these young designers,” he said.

He explained that each designer contributed as many pieces as he was able to deliver. Magugu offered 13 references, more than any other designer, noting that his tiny production structure was actually an advantage when producing small orders.

“It’s just me and my machinist — he’s exceptionally good at creating garments. It was three to four units per style, so we just had to plan it out,” Magugu said. “I know some other designers can only start at a certain number, but I can really start at the very bottom because the production is set up in such a way.”

He was gratified to learn from the 24S team that his pieces were among the bestsellers. “I really just want to show the world that all this can be made in South Africa. For them to have such good feedback really means quite a lot to me and it’s pushing me, in a way,” the designer said.

Nonetheless, Magugu said Africa has a long way to go in terms of building the infrastructure to support its burgeoning fashion industry. “It’s one thing to say, ‘Our time is now,’ but there’s still a lot of work to do,” he concluded. 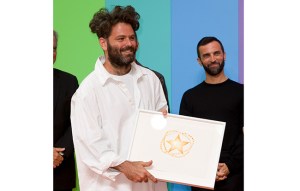