As the Paris spring collections moved into high gear, designers at some of the city's top houses were exploring highly distinctive motifs, from rock 'n' roll baroque to time reversal to peasant dreams. 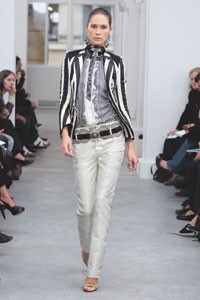 As the Paris spring collections moved into high gear, designers at some of the city’s top houses were exploring highly distinctive motifs, from rock ‘n’ roll baroque to time reversal to peasant dreams.

It sounds like an eyeful, and it was. A thinking designer more than an emotional one, Ghesquière calculates every move for its fashion significance and its appropriateness to exist under the Balenciaga name. Here, he sought to combine two elements, the sharp silhouettes that go to the core of his respect for the house history, and major ornamentation. “It’s about duality, contradiction, the opposition of architecture with airiness,” he said before the show, making the point with one of his uber-constructed, frothed-up jackets, actually three pieces worn in pilings of silks, laces and lacings.

Ghesquière opened the show with a pair of sack dresses and then moved on to the trappings of rocker chic. His super-skinny jackets and jeans worked the ornamental motif in jacquards and flashy stripes paired with high-necked, decorated shirts or logo T-shirts that flashed the warning, “Devils in Balenciaga.” Then came magical fabric collages in short Delft blue dresses and a trio of gowns destined for the celebrity circuit. And if the designer has his way, his “new proposition for evening” — elaborate Marie-Louis frock coats worn over frilled pantaloons or knickers — will find the red-carpet spotlight as well.

Yet while Ghesquière has taken great strides toward commercial viability — an effort reflected in the house’s improved numbers and the growing popularity of its secondary collection sold in Balenciaga stores — he refuses to let such concerns smother his more, shall we say, voluminous fashion instincts. Thus, he still dares to play flagrantly to that insider lust for the new and daring. While one could absolutely envision an angelic model wafting about the Costume Institute fete in one of his gigantic organzas, an Oscar starlet similarly frocked would be mocked as a freak. How fabulous that Ghesquière can play so beautifully to both.

Viktor & Rolf: “We have always believed in progress,” Viktor Horsting and Rolf Snoeren penned about their inspiration, requesting that the comment be printed upside down. “Lately we feel the world is regressing. It feels like we are turning back time.” Well, guys, you know the old saying, if you’re not part of the solution…

After the amazing bedtime story the designers spun for fall, one couldn’t help but give in to the rush of expectation, a feeling heightened upon arrival at their tent in the Tuileries Gardens, where the backdrop featured the company logo along with a pair of flower-filled urns, both upside down, and a runway attached to the ceiling. When the lights went down, out came Horsting and the newly bleached blond Snoeren for their bow, followed by a lineup of decked-out models applauding, as in a finale. Oh, what a funny, everything all backwards and upside down, and the crowd loved it.

Then came the clothes, the most elaborate out first, in keeping with the reverse motif. Gowns were twisted, turning an armhole into the neckline and the neckline into a peephole, or were inverted altogether, slim bodice becoming impossible hobble skirt. And in the ultimate barometer of a model’s skinny legs, suits morphed jacket sleeves into pant legs. Elsewhere, multiple slips worn at once seemed in a state of staggered slippage, their straps getting longer to expose the layers beneath.

This was a prime example of theme — and gimmick — trumping the clothes, which, for all the machinations, hardly represented the designers at their best or most creative. Rather, the show felt derivative of Yves Saint Laurent, a longtime inspiration the designers have typically invoked to far chicer effect, and of John Galliano, who perfected the metamorphosis trick long ago. Certainly spectacle has its place in fashion. But not when it distracts designers from the clothes, which is what happened here, as it’s a good bet the audience will not be similarly sidetracked.

Jean Paul Gaultier: On a hay-strewn runway — ah-choo! — Jean Paul Gaultier sent out a charming pack of peasants, including a darling little girl and boy, in honor of his lyric pastoral theme. It was a look that developed the fabulously folksy couture message in a way that was accessible, and utterly desirable.

Embroidered peasant blouses — some cut long as dresses, others worked into baseball jackets — formed the collection’s base. And while Gaultier’s bounty included plenty to please an urbanite, even his most sophisticated tailored suits succumbed to the bucolic mood, countrified with fluttering plissé aprons. A snug jacket was decorated with passementerie the color of home-baked bread. There were more fresh florals on display — in the form of chiffon dresses — than in a Provencal farm stand at harvest time.

While the folkloric theme could have turned camp on another runway, Gaultier let the real clothes lead the way. And the results looked as inviting as a roll in the hay.