As the spring couture collections continued, both Valentino and Elie Saab worked variations on highly specific themes: the color white and a blaze of sequins, respectively. 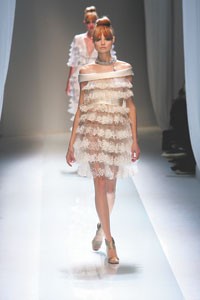 As the spring couture collections continued, both Valentino and Elie Saab worked variations on highly specific themes: the color white and a blaze of sequins, respectively.

Valentino: A little froth in pristine white — it worked for Cameron Diaz at the Golden Globes, and by Valentino’s lights, it should tickle the fancy of his core ladies, too.

The designer called his spring haute couture “A Whiter Shade of Pale,” and it was that indeed, shown in a series of curtained alcoves that he said recalled the “Sala Bianca” in Florence where he first rose to fame long ago. Nearly 45 years ago, in fact, and with that upcoming anniversary on his mind, Valentino’s nostalgic bent is understandable. Here, one could feel its impact not in clothes that felt retro, but in their repetitive hyperfocus, suggesting the likelihood that, while designing this collection, Val may have been distracted by thoughts of things to come. Actually, the color-free parade of house signatures played like a teaser of sorts to a grand anniversary extravaganza planned for July.

Valentino strayed momentarily from his hue of choice with a few pinks and a floaty yellow negligee the shape of which will ring familiar to anyone with intimate knowledge of the original Barbie doll’s wardrobe. (Not, by the way, to be read as a negative.) Otherwise, he kept everything in varying shades of white and amply decorated, from the flyaway devore tunic and skirt that opened the show to his bevy of linear gowns, all swirled, twirled, ruffled, ribboned and, of course, jeweled to characteristically grand effect.

Elie Saab: With enough glimmering sequins to make the Northern Lights look like chump change, Elie Saab’s abundant array of sexy embroidered gowns proved that the Beirut designer has found his zone — and plans on staying there. After all, why change directions when your formula yields such winning returns? Glamour-pusses from Halle Berry to Beyoncé have lit up the red carpet in his brilliant confections. And Saab claims to sell hundreds of couture pieces per season, making his one of the healthier businesses in the haute trade. This collection, though single-minded, provided plenty of fodder for the designer’s admirers. Dresses in rose or powder blue came decorated with spangles, a cascade of ruffles or a puff of lace. Meanwhile, a high slit here or a plunging neckline there drove home Saab’s idea of femininity. There were winners, including any of the long chiffon numbers with a draped bustier. Nonetheless, one would like to see Saab develop his arsenal into a more complex whole.