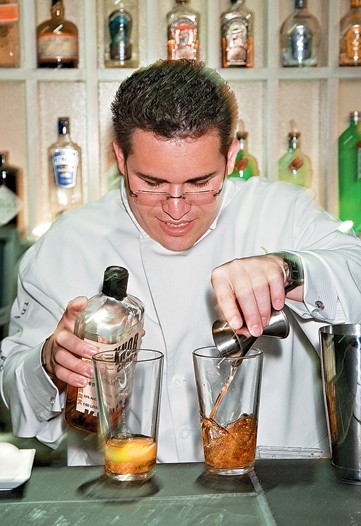 ’Tis the season to raise a glass—and after the year we’ve had, goodness knows we could use a tall one. WWDScoop gathered cocktail recipes from expert hostesses around the globe and asked “The Liquid Chef,” Junior Merino, head mixologist at Rayuela in New York, to offer his take on each.

HOSTESS: Bethy Lagardere
Brazilian-born Bethy Lagardere is a social doyenne and couture client who entertains at her homes in Paris, Morocco and Rio de Janeiro, where she’ll spend the holidays at the waterfront apartment she recently purchased. In keeping with her surroundings, Lagardere will ply holiday guests with caipirinha, a traditional Brazilian beverage. “It’s an aperitif that everyone likes,” says Lagardere, who adds a personal touch to the traditional recipe with strawberries and mango. “It’s going to be something quite out of the ordinary,” she admits of the twist. Lagardere will serve the libation alongside pastel (a Brazilian crisp pastry) stuffed with foie gras and chicken empanadas with white truffles.

THE LIQUID CHEF SAYS: “You don’t want to overpower the drink with fruits.” He suggests omitting the mandarin, because of its distinctive taste.

HOSTESS: Becca Cason Thrash
As a fixture on the Houston social circuit, Becca Cason Thrash knows a thing or two about holiday entertaining. “Our Christmases range from the sublime to the outrageous,” says the girl-about-town, who throws her own over-the-top fetes year-round. To get revelers in the holiday spirit, Thrash serves Santa’s Helper, a riff on a White Russian, which she pours directly into individual glasses. “I haven’t seen a punch bowl since my debutante ball,” says Thrash.

THE LIQUID CHEF SAYS: “It’s great because it has so few ingredients.” But there’s still room for error. “The drink has to be balanced, so be careful with the amount of crème de menthe.”

HOSTESS: Rena Sindi
London-based socialite and party planner Rena Sindi chose the potent White Snowflake as the festive tipple when she threw a private dinner for designer Alvin Valley in New York last year. Concocted with anisette, the colorless French liqueur made from anise seeds; white rum, and vermouth, the drink is sure to pack a punch at any holiday soiree.

THE LIQUID CHEF SAYS: “This is definitely the strongest of them all.” He suggests using Martini & Rossi Bianco vermouth because it’s drier and will mix nicely with the other stronger ingredients.

HOSTESS: Marjorie Gubelmann
New York City hostess and Vie Luxe co-founder Marjorie Gubelmann always has one constant when it comes to the holidays: “I have grown up with eggnog every Christmas made in an enormous crock,” says Gubelmann, who swears by her mother’s nutmeg-saturated recipe. This year, Gubelmann will be drinking the libation in New York where she will spend Christmas Day before heading south to her native Palm Beach to ring in the New Year.

THE LIQUID CHEF SAYS: While his own recipe for eggnog boasts more than 10 ingredients, this straightforward version is ideal for the home mixologist. Merino challenges those with more bartending experience to add vanilla extract and cinnamon to the mix for a “more complex-tasting” version of the drink.