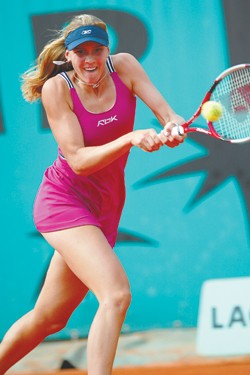 PARIS — The French Open, which ends this weekend, has produced its usual share of upsets, tense matches and, of course, fashion. One of the stars of the last two weeks has been Czech tennis player Nicole Vaidisova, 17, the 16th-seeded wonder who plays in the semifinals today. But Vaidisova also proves that on-court styles have evolved way beyond the white pleated skirts and proper polos of yore. The teenager has been playing in a hot pink dress by Reebok, which she dons with dangling earrings. By contrast, the fashions in the stands mostly have paid homage to the sport’s heritage with classic sportswear looks, primarily in white and sometimes sparked with designer bags and eyewear. The women’s finals will be held Saturday.