They Are Wearing: Gaultier Does Dallas

Black clothes was the unwritten dress code for a cocktail preview of “The Fashion World of Jean Paul Gaultier: From the Sidewalk to the Catwalk.” 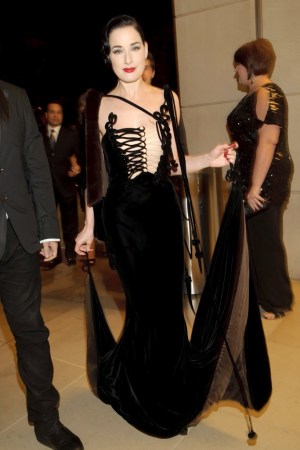 Black clothes, preferably by Jean Paul Gaultier, was the unwritten dress code for a cocktail preview of “The Fashion World of Jean Paul Gaultier: From the Sidewalk to the Catwalk” last week at the Dallas Museum of Art. The crowd of 750 put their best fashion forward to greet the designer and his Parisian retinue. Among those swathed in Gaultier couture were Deedie Rose, Cindy Rachofsky and Cameron Silver, while Jacqueline Anderson was decked in vintage Gaultier ready-to-wear. A number of men wore skirts and capes, while Brian Bolke went flashy in a sequin-printed Moschino suit, and Olivier Meslay, the DMA’s French interim director who nabbed the Gaultier exhibit for Dallas, painted a Texas flag on his head. Gaultier had nothing but praise for Dallas style, saying, “I saw some women who were superelegant and even more Parisienne than some Parisiennes.”