Showing his first women’s collection on the last day of Paris Fashion Week alongside Chanel and Louis Vuitton, Thom Browne proved he’s not a little fish in a big pond. 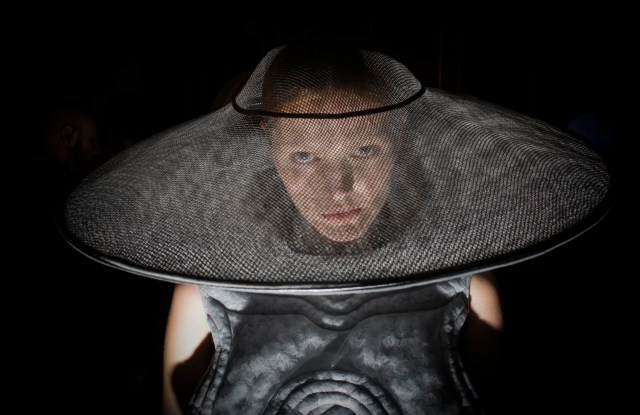 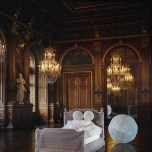 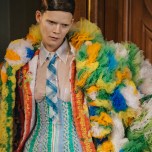 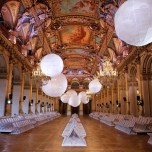 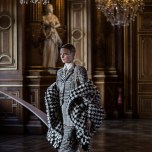 Hearing the sweet, familiar melodic voice of Disney princess Ariel from “The Little Mermaid” as the opening soundtrack to Thom Browne’s spring show did more than trigger a wave of smiles through his audience at Paris’ Hôtel de Ville; it evoked a metaphor: After many seasons of raising the theatrical and design bar on his women’s fashion shows until he had assumed the post of chief showman of New York Fashion Week, Browne, like Ariel, wanted more — to be part of the fantastical new-for-him world of Paris women’s fashion week. He’s presented his men’s collection’s there for years, and with this season, Browne moved his women’s show to the City of Light. There was nothing nonchalant about it. He came to play in fashion’s big league. He came to stay. As he said, “I wasn’t going just to try it out.”

The show was a triumph of technical mastery, spectacle and spirit. For Browne, Paris was not just a matter of location, it was an excuse — no, a motivation — to do something extraordinary, specifically celebrating the city’s right as the birthplace of couture. To make this connection crystal clear in the collection, he designed almost entirely with tulle. “It was my sophomoric idea of French couture fabric,” he said. Silhouettes born from his signature tailoring and the classic American fabrics he loves — madras, seersucker, checks — were crafted out of tulle but propelled into new fantastical proportions that reflected traditional couture grandeur and transportive whimsy. There were identical twins dancing on pointe, a 3-D tulle octopus engulfing the back of a pink madras dress and a life-size tulle unicorn inspired by the puppet from “War Horse” led by a white tulle cowgirl. “The fantasy for people is where it all starts,” Browne says.

Back in his New York studio a few weeks after the show, Browne said the Disney idea came well after the collection was designed when he was concocting the dramatic narrative that typically drives his show. This time it was the story of twins Jeanmarie and Marybeth who fall asleep and into a mutual dream that takes them to a different planet, where everyone is an individual and every individual is beautiful. “I liked the strong-shouldered group of sports coats and coatdresses and the proportion of the really slim mermaid-type skirt. That was how the idea of ‘The Little Mermaid’ came,” he said. “It was the very simple connection of mermaid skirt/’Little Mermaid,’ so it was not so intellectual.”

If it wasn’t a deep-thoughts thing, it was effective. The show drew raves. “I think, especially in the fashion world, everybody tries to be so cool and so edgy, and I have my shows that are darker than others,” Browne says of the dreamlike narrative and Disney touches. “But in a way it just kind of worked and I think it’s nice once in a while, because I smiled, too…but I’m pretty sure there were people who rolled their eyes, like, ‘Oh, please. He’s a 52-year-old man.’”

One would have to be a fashion rube to miss the fact that the childlike wonderment of the show belied the intense craftsmanship and technical difficulty that went into the garments. The fabric development was remarkable. Browne designs his collections look by look, so each model is a character. Nothing is styled in at the end. A trim madras jacket looked like the real thing but was woven with painstaking precision from strips of tulle. A dégradé tulle jacket was worn over a tulle shirt and tie. A cropped navy cricket jacket was exploded on one side and neatly shaved on the other. Puffer jackets that referenced the traditional puffers of his commercial collection and work from Moncler were escalated into sculptural, body-consuming shapes and stuffed not with down but with shredded tulle.

Everything was built on a corset base, some hidden, some obvious, such as the pants and skirts dropped from a corset top and one of the finale dresses, a black corseted tuxedo gown with a bow tie, jacket unbuttoned and folded down into the skirt. It was cut to expose the breasts — covered with anchor-shaped pasties — and detailed with a white fur anchor strategically placed at the nether region. Browne takes his work very seriously, but he does not lack a sense of humor.

Once he decided on tulle as his medium, he enlisted his partner Andrew Bolton, head curator at the Metropolitan Museum of Art’s Costume Institute, for a session in the couture archives. “It’s the first time I’ve ever done homework,” Browne says. Once there, it was a relief to discover that the silk tulle he had imagined the couturiers of yore had worked with was actually mostly synthetic tulle, which is much easier to work with on shapely garments because of the natural body synthetic fibers have as opposed to silk, which has almost no body. “I was a whole a-ha moment,” he recalls. “There was one look — the all-gray look with the cape and the jacket and the skirt — which was one of the most important pieces in the collection because it was really taking what I do and redeveloping it all in tulle. If I were to make that all in silk tulle I would have had to use like a thousand layers of tulle. I think we used 25.”

He didn’t study the archive too much. “I like to reference things and it’s nice to see but then we walked away,” Browne says. “We got what we needed but then we could kind of forget enough to create our own thing.” While his research granted permission to use synthetic tulle, and thus cut down on some fabric development and construction conundrums, the collection was still one of Browne’s most technically involved and time-consuming. He said the dégradé tweeds and seersuckers in particular required some trial and error with his fabric partners in India. In the end, the move to Paris bought him a few more weeks. “It’s not like we were pressed for time, but it was nice to have the time to work it out anyway,” he notes.

Working almost exclusively in tulle was something of a personal creative challenge, but some might argue Browne is a willing masochist. After all, he had earned a top perch on the New York calendar, where it would be hard to outdo his showmanship. Not only is Paris a bigger pond, but Browne landed on the last day of schedule, showing on a lineup that included the biggest of big fish: Chanel and Louis Vuitton, as well as Miu Miu. He welcomed the pressure. “I want to make sure people leave with an experience,” he says. “Also, being on the same day as Chanel and Louis Vuitton is kind of nice, like, can I live up to that?” To that end, Browne does not see himself as fashion’s “Little Mermaid.” He’s not yearning to be part of a world to which he doesn’t belong. He fits in quite naturally.

Showing in Paris was as much a business decision as it was artistic. “I know how showing men’s in Paris affected business. I wanted the same for women’s,” he says. To that end, as imaginative, out-there and couture-like as the runway collection was, the commercial collection translated the tulle, the corsetry, the madras, seersucker and tailoring into clothes firmly rooted in reality. There were tulle cardigans, bombers and white button-down shirts. A sporty nylon jacket had corsetry lacing up the back. One of the runway’s most extravagant looks — an explosion of yellow, blue, green, orange and white floral tulle on a jacket was derived into a similar, gently puckered pattern on a very cute, very wearable tulle miniskirt. The market reacted positively. “Following the success of the show, the collection garnered a sales increase of over 30 percent and helped us secure new distribution points, all achieved by our ability to reinterpret elements of the show pieces into wearable, appealing and more approachable ready-to-wear,” said Browne’s ceo Rodrigo Bazan.

Browne plans to continue the French connection in his next collection, which he’s already working on, with plans to show in Paris permanently. “I wasn’t running away from New York,” he says. “I really thought that Paris is a city that embraces more conceptual design and embraces designers that embrace it more from a conceptual point of view as opposed to business point of view. I wanted to see how that felt.” Asked if he felt Paris understands him better than New York, Browne was unequivocal: “They understand how I approach design. Yes.”