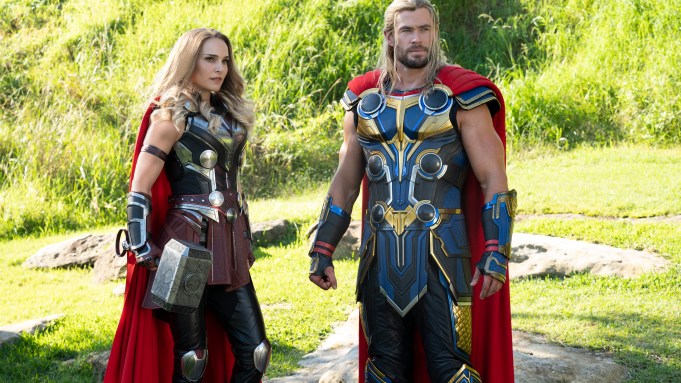 When approaching the costumes in Marvel Studios’ “Thor: Love and Thunder,” costume designer Mayes C. Rubeo didn’t shy away from using an ample amount of color, which was thanks in large part to the film’s director, Taika Waititi.

“Taika is a volcano of explosions,” she said. “He is a constant fountain of wanting to do a lot of new things with new technology. He’s very interested in getting into the new technologies and he’s very accurate and well-informed. He really keeps me on my toes.”

“Thor: Love and Thunder,” which premieres in theaters on Friday, is Rubeo’s second “Thor” movie and third time working with Waititi. She embraced much of the same kitschy and colorful aesthetic she used for the third Thor film, 2017’s “Thor: Ragnarok,” and took it a step further for the fourth film with new costumes for the titular superhero, played by Chris Hemsworth, and for Mighty Thor, who is played by Natalie Portman.

As “Thor: Love and Thunder” contains flashbacks and moments in the present, Rubeo created roughly 25 costumes for Hemsworth, many of which were different iterations of Thor’s traditional uniform of the metal-plated armor and red cape. She produced other versions of Thor’s uniform by incorporating more vibrant colors, like reds, blues and metallic golds to match the exaggerated aesthetic of the film.

“This is like fireworks in the sky with all of the colors,” Rubeo said of Thor’s costumes. “It really is an explosion, and I don’t think you can go any louder than with Thor’s costumes.”

For Portman, who is returning to the Marvel Studios’ franchise to reprise her role of Dr. Jane Foster and take on the new superhero title of Mighty Thor, Rubeo wanted to incorporate elements of Thor’s uniform while still making it unique to the heroine.

While Portman sports a similar costume, Rubeo chose to use silver metallic and deeper red hues for the actress’ Mighty Thor costume. One of the biggest differences between the Thors’ costumes, however, is that Portman’s was paired with a winged silver headpiece.

“When you have an actor with that caliber, she really is that character before she gets into the fitting room,” Rubeo said about working with Portman. “She is already that character in her mind and she walks into the fitting room knowing exactly what she wants. We created a wonderful, lightweight, dynamic and very ’80s [headpiece], and the [costumes’] colors, we wanted to make them similar to old Thor, but because Thor has all these new colors, we wanted to do something a little different for her.”

On the opposite end of the color spectrum is Christian Bale’s villain, Gorr the God Butcher, who stands in stark contrast to both Thors with his monochromatic white look. For the character, Rubeo wanted to reflect his ancient background, so she referenced old marble statues and created an intricately draped costume for Bale.

“It was interesting to make this character’s [costumes] white because it makes it more eerie,” she explained. “We didn’t want to fall into the villain in black since here the hero side is in black. The color doesn’t have to do with good or bad. His draping is inspired by classic statues, and I was very happy to get incredible fabric that we treated. It was an interesting textile — it was handwoven and that gave it that kind of antiquity and ancient feeling to this God Butcher who comes from a very archaic world.”

For the film’s other characters, like Tessa Thompson’s Valkyrie and the people of New Asgard, Rubeo essentially kept the same aesthetic from pervious iterations of the characters, adding modern touches to their costumes to show how they’ve adapted to life in their new environment while still holding onto certain traditional style elements that were popular in Old Asgard.

With three Marvel Studios projects now under her belt — Rubeo also designed the costumes for Disney+’s “WandaVision,” which she won an Emmy Award for — the costume designer explained that she feels she can take on any type of project after completing “Thor: Love and Thunder.”

“After working especially on this movie, I can tell you that I can be challenged to do anything in costumes,” she said. “I’m saying this with no presumption. I’m saying this because working in that world so many times, you must learn something. I’m happy to say that I’m at a very good point in techniques and design and knowing the fabrics and how things fall.”

How ‘Becoming Elizabeth’ Brings Modernity to the Period Drama Through Costumes