Branching beyond its signature chain, Tiffany & Co. said it has invested in jewelry firm Temple St. Clair to help it launch a retail business. 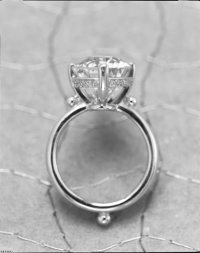 NEW YORK — Branching out beyond its signature chain, Tiffany & Co. said Thursday it has invested in New York-based jewelry firm Temple St. Clair to help it launch a retail business.

The investment was made through East Pond Holdings, a subsidiary of Tiffany & Co., which handles investments in non-Tiffany activities. Tiffany’s Temple St. Clair investment will be handled by the Fifth Avenue jeweler’s specialty retail division, which was started last year with the completion of the acquisition of Little Switzerland, the specialty retailer with 17 luxury boutiques on five Caribbean islands and in Alaska.

In addition, Tiffany’s business development division will provide consulting services to Temple St. Clair LLC, which was formed this week to incorporate the retail channel.

“These are opportunities in certain sectors that cannot be served effectively by the Tiffany & Co. brand,” said a Tiffany spokeswoman, who declined to disclose the size of its stake.

“We have been aware and known Temple St. Clair for several years and followed her work,” the spokeswoman said. “She is a very talented designer at the point of her business where there is an opportunity to grow and evolve it from a wholesale business into retailing. That’s the expertise we can bring to her.”

Temple St. Clair is scheduled to open its first unit, a 750-square-foot boutique at the South Coast Plaza mall in Costa Mesa, Calif. The plan is to follow this with a second unit on the East Coast, though no details were available.

As for whether the line will also be distributed at Tiffany, the spokeswoman said, “We are very pleased with our three name designers — Jean Schlumberger, Paloma Picasso and Elsa Peretti — and Temple will not be added to the roster.”

With more than 20 years of design experience, designer Temple St. Clair Carr’s jewelry is inspired by her years of studying in Florence, Italy, and travels to Turkey and India, using 18-karat yellow gold and platinum and cabochon-cut facetted stones like tourmaline, aquamarine, peridot and diamonds and pearls. Pieces include Bombé Bubble rings, which feature clusters of cabochon stones, blue moonstone and diamond cluster necklaces and bracelets. The collection has an established celebrity following and the likes of Nicole Kidman, Renée Zellweger and Rita Wilson have been spotted sporting her designs.

The line is currently sold in jewelry and high-end specialty stores such as Bergdorf Goodman, Neiman Marcus and Fred Segal.

As for any further acquisitions or investment, the spokeswoman said: “Whatever we go into, whether it’s an acquisition or investments, they will be closely aligned with jewelry retailing.”

Last month, Tiffany & Co. posted higher fourth-quarter sales and earnings, and alluded to its plans to invest into a new non-Tiffany retail jewelry concept this year.

“There will be incremental business development spending to support new retail jewelry concepts, one of which will be rolled out in 2003,” James Fernandez, Tiffany’s chief financial officer, said at the time. “The U.S. jewelry market is vast, competition is fragmented and we believe very strongly there are certain segments of the market that are underpenetrated, but cannot be served efficiently by the Tiffany & Co. brand. We intend to address that opportunity in the near future.”