By Patty Huntington on May 24, 2006
View Slideshow 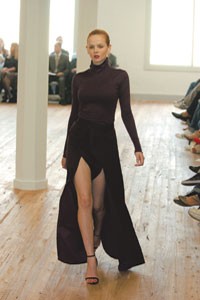 SYDNEY — Northern runways aren’t the only ones suffering from schedule-creep. Both of this region’s high-profile runway events are bringing forward the dates of their autumn-winter 2007 showcases.

The annual Air New Zealand Fashion Week has moved its show up a month to run Sept. 19-22 at Auckland’s Viaduct Harbour Marine Village.

Under a soon-to-be-announced new naming rights sponsor, the event formerly known as Mercedes Australian Fashion Week is also moving the dates of its autumn-winter showcase forward. Launched in November 2002 at Melbourne’s Federation Square — six years after the debut of the better-known spring-summer show in Sydney — the autumn-winter event has since oscillated between dates in late October.

IMG Fashion Asia Pacific managing director Simon Lock told WWD in October that the event’s autumn-winter 2007 showcase would be brought forward to better meet the selling cycle of the local industry. The decision followed a significant drop in exhibitor numbers in October — right under the nose of a delegation from IMG’s New York and Hong Kong offices, which had flown out just weeks after IMG’s acquisition of the event.

At press time Lock had not yet confirmed a new date. According to industry speculation, however, it will likely take place the first week of September, alongside Melbourne Spring Fashion Week, a consumer retail festival.

The timing also would bring AFW head-to-head with the larger, volume-focused Fashion Exposed, which runs Sept. 3-5 at the Melbourne Exhibition and Convention Centre. Organizers of Australian Exhibitions & Conferences are expecting around 600 exhibitors and 8,000 attendees, up from 460 and 7,441, respectively, last September, in a total floor space of 264,000 square feet.

Air New Zealand Fashion Week managing director Pieter Stewart is not too concerned about the fact that the show’s new dates run concurrently with London Fashion Week. Even if it means the possibility that one former NZ runway star, Karen Walker, can’t show in Auckland because she is due to show that week in London.

This story first appeared in the May 24, 2006 issue of WWD. Subscribe Today.

Of the clash with London, she noted: “We’ve brought London buyers out and they might buy for a season or two and then don’t follow through. Our designers decided that most of the buyers that they’re interested in don’t go to London Fashion Week. What they’ve had to do is be realistic about the markets that work for them: Australia — hugely; Asia is a developing market that is working well, and the [United] States.”

And Karen Walker might ditch London anyway. Walker told WWD that she is currently mulling showing in New York in September. If that’s the case, Walker will join another New Zealander, Trelise Cooper, who is due to show in New York that month.

“We have shown in London for a long time and it’s been really good for us,” said Walker. “Britain is a very strong market for us. But America is also very strong in terms of sales. I like London because it’s cool, because it’s about ideas, it’s about raw talent. But it’s not as big a fashion week as New York, in terms of the people who visit it.”

According to Stewart, ANZFW will boast approximately the same size exhibition space as last year: about 17,000 square feet, including three tents showcasing 46 designer labels in 37 shows and 54 exhibitors, all marginal increases over 2004. There were 600 to 700 delegates from 14 countries as well.

Where the growth lies is in visitor attendance: 14,000 attendees in 2005, up 56 percent over 2004. This can be partially explained by the event’s public component, something Stewart plans to grow this year.

But while runway events are cozying up to consumers, traditional shows are focused on a real space crisis.

AEC has 150 accessories companies also keen to get into Fashion Exposed, but no space to accommodate them. As such, the company has decided to split its Fashion Exposed show in Sydney across two venues for the first time next March.

“We run nine major events a year, and this [space] problem is across all the industries we deal with,” said AEC managing director Marie Kinsella. “When times are tight, trade fairs traditionally do grow because companies are looking to spend their tight marketing dollars in an effective way, and you can actually measure the direct business impact of the investment you’ve made by participating in a trade fair, as opposed to taking an ad in a glossy magazine.”

Four of Reed Exhibitions’ six Gift Trade Fairs have filled their venues to capacity, said the company’s director of gift shows, Omer Soker. To accommodate growth, Reed Exhibitions will split its next Melbourne Gift Fair into two locations for the first time. The 135,600-square-foot show will run Aug. 5-9 in both the Melbourne Convention and Exhibition Centre and the Graham Centre in Port Melbourne.

The Melbourne Gift & Homewares Australia Trade Fair, which runs parallel to Reed’s show, also will split its event between the two venues, sharing a shuttle bus service with Reed.

Soker anticipates only a marginal increase at Melbourne’s August 2005 show, which attracted 38,188 visitors and 645 exhibitors; ditto the Sydney show at the Sydney Convention & Exhibition Centre, which runs Aug. 5-9, and the Brisbane show, which runs July 8-11.

The company recently recategorized exhibitors into four subbrands: general gift, home, jewelry/fashion and kitchen. Jewelry/fashion represents one of Reed’s fastest-growing categories, taking up 25 to 30 percent of the total space.

According to the National Business Events Study 2004, exhibitions account for $2.2 billion of the $12.99 billion expenditure that is directly generated by Australian business events. The Exhibition & Event Association of Australia has identified that 45 percent of exhibitions take place in New South Wales — contributing more than $1 billion annually to the regional economy.

To ensure the continued growth of the trade fair sector, the EEAA currently is lobbying state governments to designate more land for exhibition halls, according to EEAA chief executive officer Mark Baker. The EEAA has earmarked the new East Darling Harbour precinct — a 22 hectare site on the western foreshore of Sydney’s central business district — as a potential venue for new construction.

Baker said the organization would like to see a new center of 538,000 square feet, with room for expansion.

“Look at Melbourne. [The convention center] was only built 10 years ago and it’s full. In anything we propose, you’ve really got to look at the 20- to 30-year plan and not the 10-year plan.”