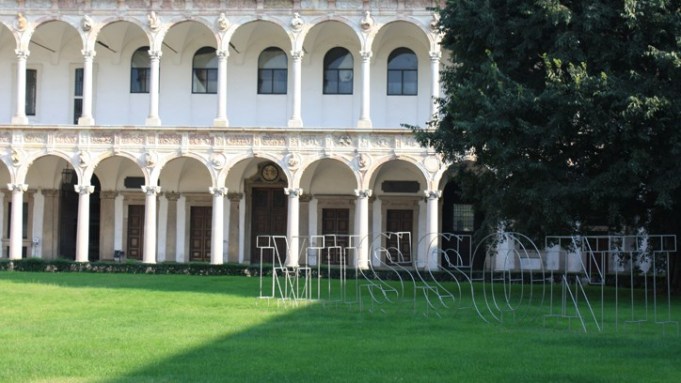 MILAN — Smooth sailing? The days leading up to Milan Fashion Week were anything but.

Following the controversy surrounding the tightly packed show calendar, yet more unwelcome news came with the mayor’s decision to endorse a traffic ban on Sunday to help reduce the city’s notoriously high pollution. No fear for those sky-high heeled clad buyers and press, though: The city will grant special permission to everyone associated with fashion week and limos and taxis won’t be affected.

Still, the decision left many in the fashion industry questioning the bad timing as more than 10,000 people are expected to flock to Milan for the shows.

“I imagine it was an oversight, after all the support the city had promised us,” said Angela Missoni, who was especially disappointed as she has decided to open her show on Sunday to the public. Held once again at Milan’s University, the show will allow onlookers to see Missoni’s models parade in the large cloister, while retailers and the press will be seated inside the 15th century building.

“I’ve been mulling this idea for years,” said Missoni, who had her male models walk and pose in front of the Duomo cathedral last month during men’s fashion week. “That experience was extremely positive for us, it had an international echo and we decided to replicate it with our women’s collection,” said the designer.

The fall shows take place as the Italian fashion industry rushes to put as much space as possible between it and the dire 2009. The Camera della Moda characterized last year as “extraordinarily negative,” reporting a fall in sales that “has no equal over the past 20 years.” Revenues dropped an estimated 15 percent to 56.5 billion euros, or $78.5 billion at average exchange rate. Exports fell 18.7 percent to 32.8 billion euros, or $45.5 billion, and Mario Boselli, head of the Camera, estimated that 50,000 jobs are at risk throughout the entire industry.

The fashion association does forecast a slight recovery in sales for 2010, which should rise 6.5 percent in the first half of the year. And consumer spending is picking up in Milan. “We have been pleased with Milan’s retail performance since the beginning of this year, mainly driven through a returning consumer confidence and strong flow of tourists from Asia, above all China, as well as South Americans,” said John Hooks, deputy chairman of Armani Group, citing Giorgio Armani’s men’s wear and Emporio Armani women’s wear as showing significant increases compared with last year. Hooks said these results “have kept us very optimistic for the coming months.”

Michele Norsa, chief executive officer of Salvatore Ferragamo, said, “The past six to 10 weeks have been extremely encouraging — in Milan in particular, with a 40 percent increase in sales since the beginning of the year.” Norsa pointed out that February last year was “among the worst” periods ever, but said Italy’s market in general is now showing a “double-digit growth.”

Gianguido Tarabini, ceo of Blufin SpA, which produces the Blumarine and Blugirl brands, said 2010 is off to a strong start, citing a 10 percent growth in the Blumarine store.

Massimo Ferretti, executive chairman of Aeffe SpA, which manufactures and distributes collections for Alberta Ferretti, Moschino, Pollini, Jean Paul Gaultier and Cacharel, said the brands’ Milan boutiques have been drawing “lots of international shoppers,” and “2010 has started better that last year, with positive signals from Milan.”

Moschino’s first hotel opens tonight with the Cheap & Chic show, followed by a performance by Pixie Lott and a music event DJed by actress Asia Argento.

“The hotel is an additional confirmation of the flexibility of the brand, which has maintained its vitality over the years,” said Ferretti.

The label’s creative director Rossella Jardini defined the hotel, called Maison Moschino, as a “warm and welcoming house.” In keeping with the brand’s tongue-in-cheek humor, the hotel has a fairy-tale mood, with rooms dedicated to Alice in Wonderland and Little Red Riding Hood, and surreal, whimsical designs, such as a chandelier dripping with cupcakes or a bed enveloped by an oversize, red evening gown.

Moschino partnered with Hotelphilosophy SpA, of the Mobygest Group, and refurbished a Neoclassical train station that dates back to 1840. The hotel comprises 65 rooms, a restaurant by two-star Michelin chef Moreno Cedroni, a bar and a spa managed by Culti. The brand’s new “Lost and Found” travel line is also expected to be unveiled at the hotel.

On Saturday, The Rodnik Band is expected to previews its new collection for Italian department store chain and brand OVS Industry, owned by retailer Coin, and stage a concert at the central San Babila store. Also that day, Ferragamo will unveil “Greta Garbo, The Mystery of Style,” an exhibition at the Triennale dedicated to the legendary actress, whom Salvatore Ferragamo first met in 1927. Organized with the help of Garbo’s great-nephew Craig Reisfield, the son of the actress’ only niece, the show comprises a selection of film costumes, such as the dress worn in “Queen Christina,” but also Garbo’s personal pieces, clothes by Gucci and Givenchy and original Ferragamo footwear, including the “Greta” shoe, with a stitch-less upper, a soft toe and a simple clasp.