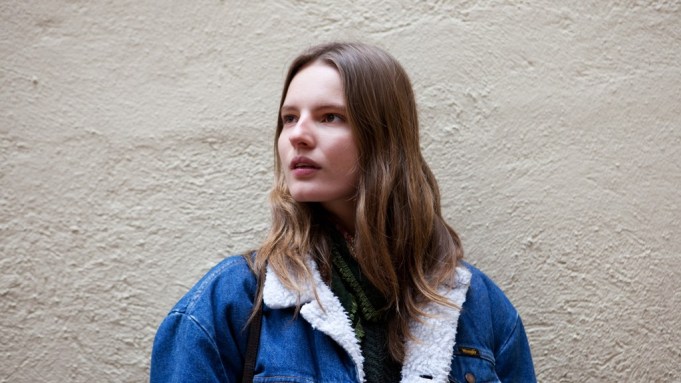 Thirty days, four cities, one snowstorm—and 76 shows. WWD caught up with Tilda Lindstam, who stomped more runways than any other model this season.

WWD: What is your life like during collections?
Tilda Lindstam: During New York, you’re still a human, but by the end of New York, you turn into a zombie. You fly to London and do shows right away and just stay in this zombie mode, which is just like you’re not even a person. Honestly, it makes it easier. I feel like my normal life is on pause. I do [the collections], and then I come back to my life.

WWD: How did you start modeling?
T.L.: I was working a little bit in Sweden, I came to New York for the summer [in 2008] and I just ended up staying. I lived with this really sweet Danish girl in a tiny apartment on St. Mark’s. It had a purple kitchen with yellow polka dots—all of the walls were different colors. It was so small; I couldn’t even open my suitcase.

WWD: Were you interested in fashion before you became a model?
T.L.: No, and I have much more respect for it now. There is so much work, which you don’t realize until you see the process. As a model, you go into fittings and people are sitting there sewing no matter what time you walk in. I do respect it now, but personally, for me, I don’t really get that affected.

WWD: Where did your sense of style come from?
T.L.: I basically only wear vintage clothing. I don’t know if something looks good on me until I get a compliment—then I’ll wear it again. If no one says anything, I know not to wear it.

WWD: What was the highlight of your season?
T.L.: My favorite show was probably the Givenchy show. The band that played, Antony and the Johnsons, has been one of my favorites since I was 13 or 14. The songs they were playing have a lot of emotional value to me, and it felt like a part of my normal life was coming into this strange world that I don’t relate my normal life to.

WWD: Did you have a favorite look that you wore this season?
T.L.: Alexander McQueen, but when am I going to wear that? I was so honored to walk in that show. It takes an hour to get dressed and it’s the most painful thing ever. You wear these corsets that are so tight and these giant hip cages—they bring a drill and drill it onto you. It’s insane. It’s the most painful show, but it’s also the most beautiful show.

WWD: Do you ever stop and think, “I can’t believe this is my job”?
T.L.: It’s sort of sad that it’s so hectic during the shows. Once you’re there, you can’t appreciate it as much as you can in the aftermath. Now, I’m very proud and so honored. But when you’re there, you’re so stressed and tired that you don’t really realize how lucky you are. I was doing the Dior show this season and there were mirrors everywhere. So when I stepped out, the first thing I saw was me walking. It was so surreal to see yourself as it’s happening. I saw myself walking the entire way and it really hit me.

WWD: Do you keep any mementos to remember your experiences?
T.L.: I have a Polaroid camera that I take photos with. It’s nice to have a real, physical memory. I keep them in a little box. It’s something for the grandkids.