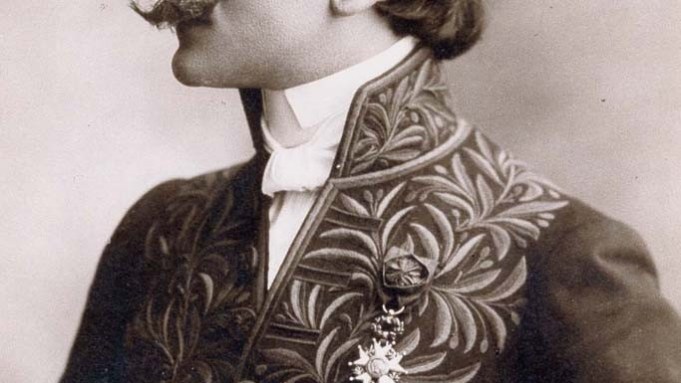 1901
• Writer Edmond Rostand asks Lanvin to create the ceremonial suit for his introduction into the French Academy, marking her first step into men’s bespoke tailoring.

1907
• Lanvin and Marguerite go to a costume party, and a famous photograph is captured, showing the designer and her daughter in matching costumes and hats. A stylized version of the image by Paul Iribe later becomes the logo of the house.

1915
• Lanvin takes part in the Panama-Pacific International Exposition in San Francisco, increasing her visibility in the U.S.

1920
• The designer opens an interior-decoration store in collaboration with designer Armand-Albert Rateau.

1923
• The company introduces a sport collection that includes swimsuits, ski suits and golf and tennis attire.
• A dye factory is built at Nanterre to produce exclusive colors for the label. It eventually also becomes the home of the perfume laboratories.
• The fragrance line launches with scents including Irisé, J’en Raffole, La Dogaresse and Le Sillon.

1926
• The designer is made a Knight of the Legion of Honor, France’s highest civilian decoration.
• Lanvin’s nephew Maurice becomes the director of the new men’s department.
• The company opens dedicated departments for fur and lingerie.

1927
• Perfumer André Fraysse creates Arpège to mark the 30th birthday of Lanvin’s daughter. Its round, black bottle is designed by Armand-Albert Rateau and features a gold version of the logo designed by Paul Iribe.
• Shops open in Deauville and Biarritz, France; Barcelona and Buenos Aires.

1935
• Exclusive Lanvin creations are modeled at a gala held aboard the ocean liner Normandie on its maiden voyage to New York.
• Lanvin takes part in the Brussels International Exposition.

1938
• The designer is elevated to the rank of Officer of the Legion of Honor.

1946
• Jeanne Lanvin dies on July 6 at age 79. Her daughter becomes chairman and managing director of Jeanne Lanvin and Lanvin Perfumes.

1981
• Maryll Lanvin (a niece by marriage) takes over the ready-to-wear division.

1992
• Dominique Morlotti takes over as women’s and men’s rtw designer.

1993
• Lanvin withdraws from haute couture to focus on luxury women’s rtw and accessories and its made-to-measure men’s sportswear line.

2001
• Lanvin is sold to Taiwanese businesswoman and philanthropist Shaw-Lan Wang.