A boom of domestic travel this summer has inspired Li-Ning and Edition to bring their shows to one-of-a-kind locations across the country.

Finale of Edition in Yangshuo, China.

LONDON — While Louis Vuitton moved its spring 2021 men’s show to Shanghai from its usual spot Paris to maximize its value amid a robust China rebound, Chinese fashion brands, which are no longer satisfied with doing things the traditional way, are picking one-of-a-kind locations across the country to bring the branded experience to the next level this week.

Li-Ning, China’s second-largest sportswear giant that has expanded into fashion and has shown in Paris in recent years, on Tuesday moved its 30th anniversary show to Dunhuang, a city in the northwestern Gansu Province, on the edge of the Gobi Desert. Once a frontier garrison on the Silk Road, the region is known today for the Mogao Caves, a complex of grottoes adorned with Buddhist statuary and frescoes.

“I think this is a very safe and special choice during the epidemic,” said influencer Zheng Yu, founder of the popular Weibo account Fashionmodels. “It’s almost impossible to do indoor shows in big cities due to tight regulations at the moment, and since Li-Ning has a collaboration with the Dunhuang Museum, they simply moved the show in the middle of the Gobi Desert.”

The show also offered China’s fashion jet setters, who have been grounded since January, a good reason to travel. Dunhuang is only three and five hours away by plane from Beijing and Shanghai, respectively, and the trip has generated a good amount of social media content for showgoers. 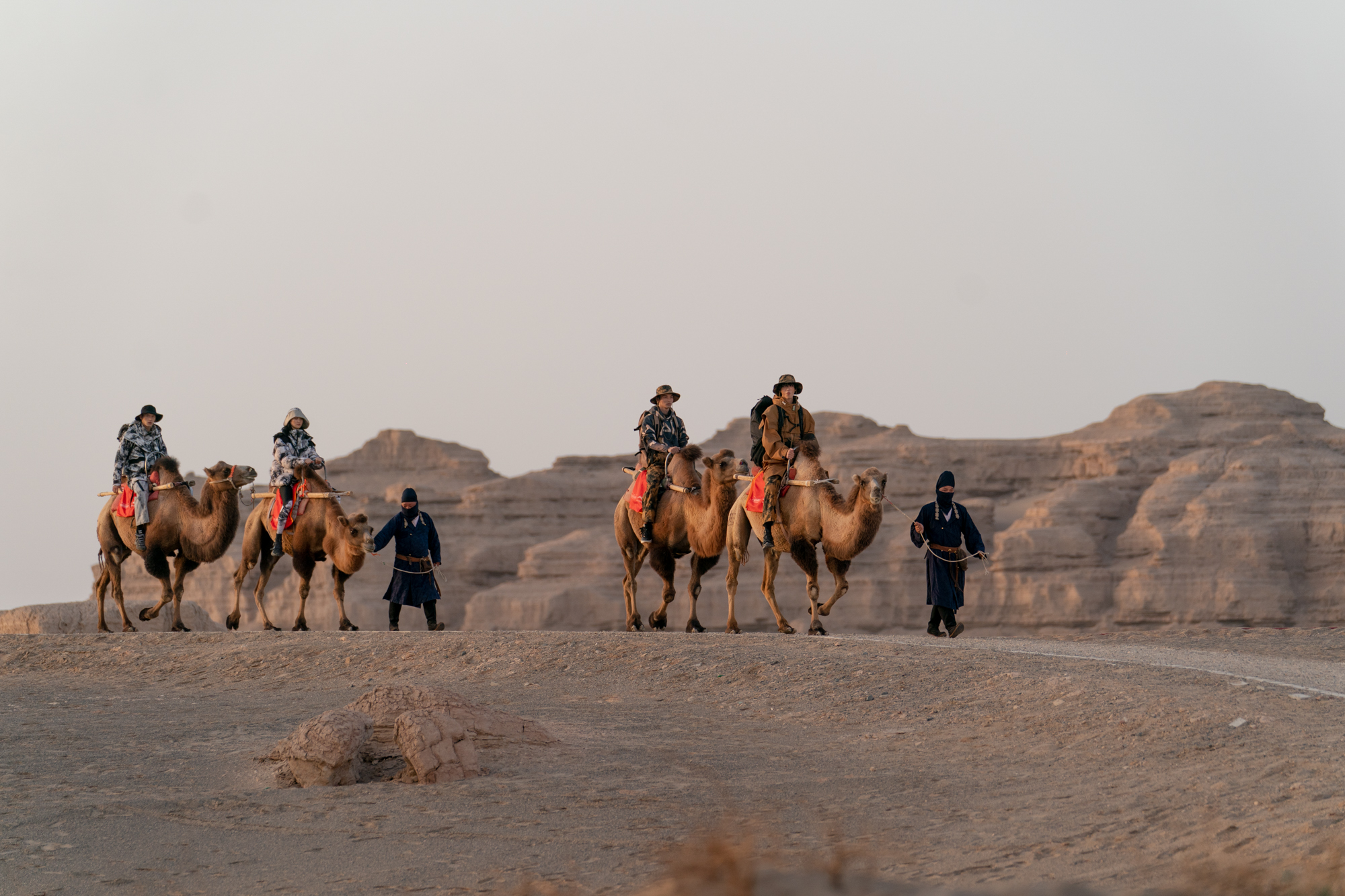 Models opened the Li-Ning show riding on the back of camels.  Courtesy Photo

This is not the first time a fashion show has taken place at Dunhuang. In 2007, on the weekend of Fendi’s Great Wall show, Pierre Cardin put on a spectacular outdoor fashion show on a thin, white podium winding through the dunes of the Gobi Desert there.  He cited Marco Polo as a source of inspiration, and the show, featuring 100 models wearing his most recent designs for his Chinese licensing partners, was the biggest production he had done in 40 years at that time.

Li-Ning, this time, flew more than 200 editors, influencers and Olympic champions, plus 200 more models and staff to Dunhuang. Models opened the show riding on the backs of camels. The designs infused Buddhist frescoes in the Mogao Caves, and the Gobi Desert’s earthy tone, with athleisure elements. At the after party, the brand set up a local market offering regional dishes, lit a campfire, and presented dance and music performances for the guests.

On Friday, on the other side of the country, Edition, fashion label Mo&Co’s premium brand, will take over Yangshuo Sugar House, an award-winning boutique hotel converted from a sugar refinery, to host its 10th anniversary show. With 203 stores nationwide, Edition is one of the few Chinese commercial brands to have built a creditable fashion narrative in recent years.

Yangshuo is a county under Guilin and a popular resort town for international travelers in southern China’s Guangxi Zhuang Autonomous Region. The hotel is located on a plot of flat land between mountains next to the Li River, with an unparalleled view overlooking the other side of the dramatic karst mountain landscape. 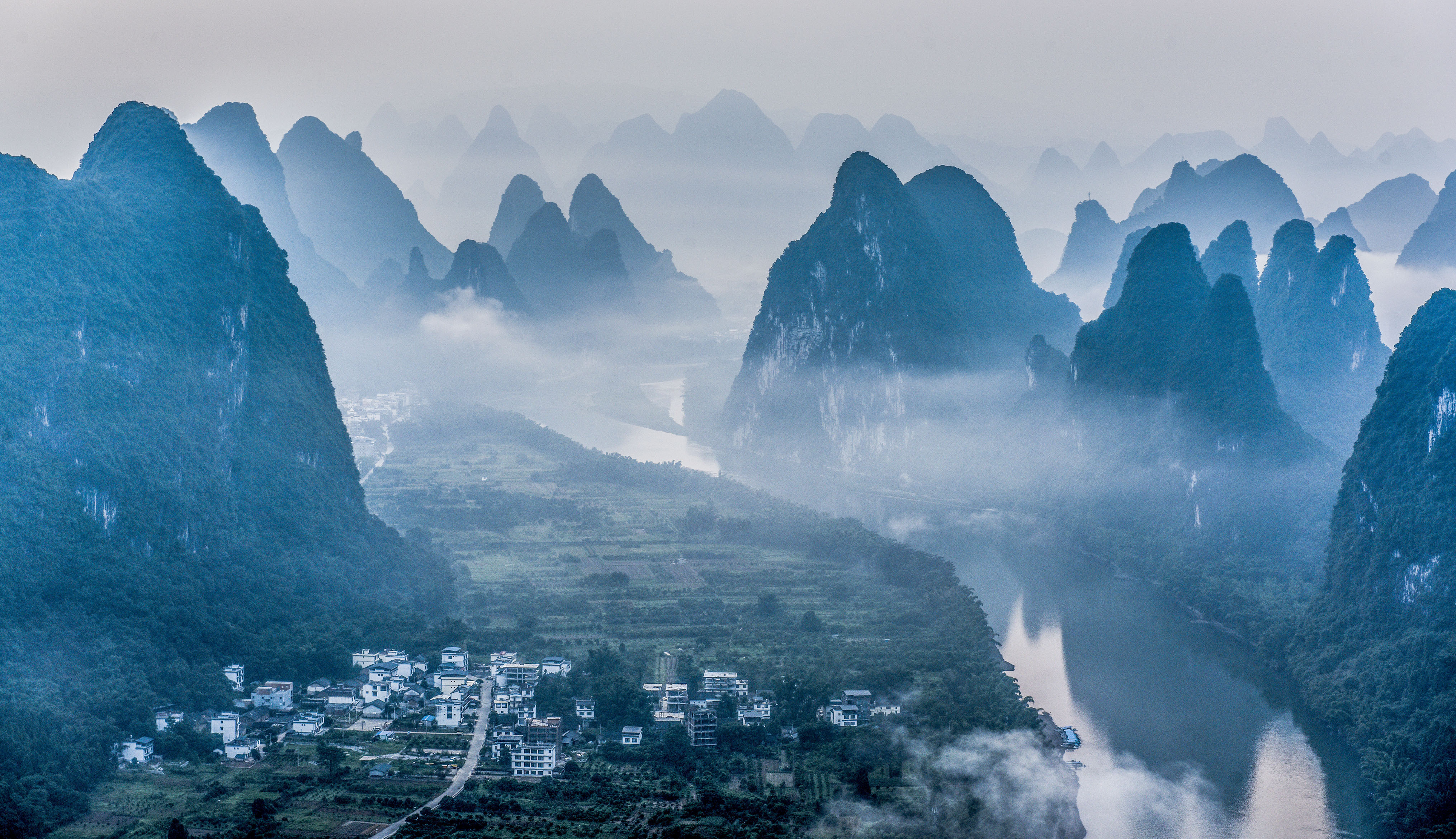 The mountains and hills are surrounded by mist and cloud along the Li River at sunrise in Yangshuo county.  Peng huan - Imaginechina/AP

The Guangzhou-based Edition has shown in boutique hotels and galleries in Beijing and Shanghai before, so doing shows in other cities is not a challenge. Due to limited capacity, the guest list is being kept below 200. But with Yangshuo’s mountains as the backdrop of the runway, the brand is confident that the quality of the show will hit a new height.

“Guilin is a masterpiece by nature,” said Chuxuan Feng, founder of Huasheng Media, publisher of the Chinese editions of T magazine, Wallpaper and WSJ Magazine. He was traveling from Beijing to attend the show when he spoke to WWD.

“Edition is taking a stance by showing here. The brand is building a Chinese identity that’s deeply rooted in China’s rich culture and nothing is more Chinese than Guilin’s rivers and mountains that have been prominently featured in Chinese painting for millennia,” he added.

Made in China’s New Tale