Animals on the Runway

Putting animals on a fashion runway has its risks. Moncler Gamme Rouge and Mulberry took a chance.

By Samantha Conti and Miles Socha on April 15, 2013
View Slideshow 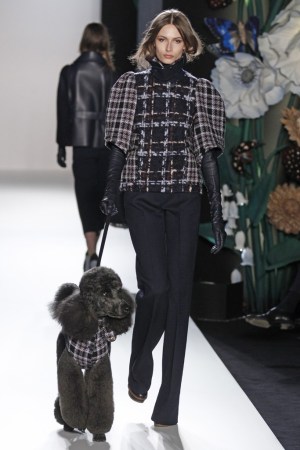 Putting animals on a fashion runway has its risks. Creatures can escape their handlers, get stage fright—and even pause to relieve themselves.

All of the above happened when Moncler Gamme Rouge staged an arctic odyssey to remember in Paris, casting five different Husky breeds to accompany models dressed in Nanook of the North furs. No matter: It was a charming, transporting show, and the dogs were arresting with their piercing eyes and full coats. One who got off the leash disappeared under the benches; another skulked along the fringes of the set, giving those in the front row a petting opportunity.

Moncler says the production company fully expected some dogs might stray, knowing they’d remain calm and eventually return to find their trainers. The dogs were all from France, at an average age of five years.

They traversed a runway flooded with dry ice, decorated with two types of artificial snow and dotted with Plexiglas puddles. The backdrop was polystyrene carved and painted to resemble an ice wall. And to balance out the animal kingdom a little better, there were people dressed in polar bear suits cavorting on the runway with models.

According to Moncler president Remo Ruffini, the point of the show was to go “deep into the brand soul: Where the cold is absolute and extreme.”

As a behavioral contrast, the dog on Mulberry’s runway—a Standard Poodle called Max—is a fashion veteran and loves his moment in the spotlight. “When it came time for the dress rehearsal and the music started, he knew just what to do. And, always, on his first exit, he likes to linger at the edge of the runway and look at the cameras,” says Mulberry communications director Vanessa Lunt. Mulberry has been using dogs in its shows ever since creative director Emma Hill arrived in 2007. “It brings an element of playfulness that complements the brand ethos,” adds Lunt.

Hill chooses a breed that dovetails with the season’s theme, and begins the casting process by watching the dogs walk. Besides Max, whose owner is a friend of Hill’s, the brand has used Matilda the Pug, a Hungarian Puli and a Schnauzer.

Lunt notes that far from creating a disturbance backstage, the dogs are coveted creatures. “The girls are quite happy if they’re the ones chosen to walk with the dog—they know for sure they will be photographed. If you look in the [London] broadsheets, the picture they use is the one with the dog,” she adds.

Mulberry has other reasons for hiring dogs to walk at its shows: The brand offers a small collection of dog coats, sold at stores like Harrods. So what will the stylish pooch wear this season? Tweed and a floral print.