Tocca’s first collection of swimwear, similar to its spring dresses and sportswear, has a breezy feel using pastel colors and embroidery. 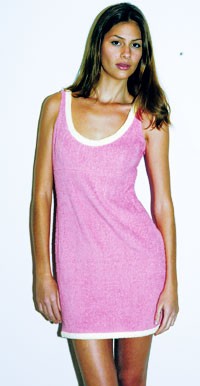 NEW YORK — Tocca’s feminine dresses have long conjured images of sun-filled summer afternoons at the beach. Now the company is building on that sentiment with a debut swim collection set for spring.

“We have wanted to do swim for a long time,” said Tocca chairman Edoardo Mantelli in an interview at the company’s showroom here. “Our business now is strong, and it’s a good time for us to expand.”

The initial collection of swimwear, similar to the style direction of Tocca’s dresses and sportswear for spring, has a breezy and feminine feel with pastel colors, embroidery and embellishments. “It’s one universe for Tocca, and we take the same approach and use the same techniques in swimwear that we are using in our dresses and other offerings,” said head designer Ellis Kreuger, who oversees the direction of all Tocca’s products.

Tocca joins a growing number of fashion firms that have jumped into the swim business, including St. John Knits, Juicy Couture and Paul Frank. Michael Kors will launch a collection for Cruise 2006, and designers such as Carmen Marc Valvo are also said to be entering the category.

For now, Tocca’s swim offerings are all two-piece suits that come in European and American cuts and are available in a selection of bodies for the top and bottom, including tops with D-rings and string closures. There are also a few terry cloth cover-up items, including a pink short dress and cropped jacket that could easily be worn out shopping in Palm Beach or by the pool at SoHo House.

Produced in Italy, the collection wholesales between $42 and $70, and President Gordon Finkelstein projected sales of about $250,000 for the first year. Tocca’s total annual sales are an estimated $15 million. Finkelstein said Tocca will target its swim distribution in the same stores where the ready-to-wear is sold, such as Henri Bendel and Saks Fifth Avenue, but also sees potential to tap into new retailers with this collection. It also plans to sell it internationally in Europe and Japan.

The 10-year-old company has been slowly adding categories and building its business. Beauty made its debut in 1997, and accessories and bath and body collections were launched two years ago and have been growing. The company just entered the children’s business, and the first collection will hit stores this holiday season. The swimwear offerings are being introduced for children this spring and have styling and fabrics similar to the women’s collection. Unlike many other fashion firms, Tocca has shunned licenses and has developed its additional products in-house under Kreuger’s direction.

Finkelstein and Mantelli said Tocca wants to add men’s and home eventually. “But we like to take our time and add things when the time is right,” Finkelstein said.